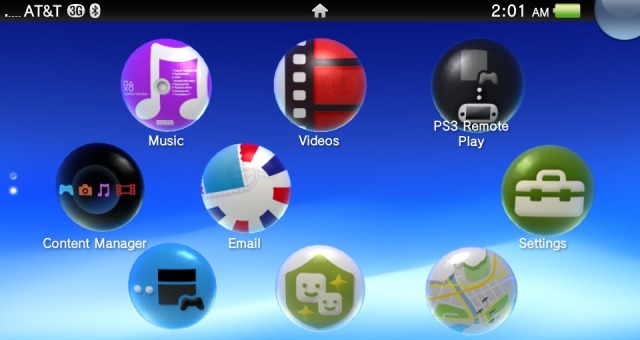 Every gamer has either wanted to play their favorite games on the go, thought about their favorite games on the go, or have found gaming alternatives when on the go. The PS Vita, Sony’s handheld gaming isn’t new but has undergone a resurgence of sorts thanks to the popularity of the Playstation 4. Since I usually play on my smart phone or even my iPad on the move, I got the PS Vita because of the Playstation 4, and I also admit a desire to have more mobile games whose playing times weren’t limited by microtransactions. And I got a pretty sweet deal that included free games and a memory card so I didn’t have to purchase anything extra to get  started. However the base model doesn’t come with a memory card and that usually has to be purchased separately. So here’s everything I had:

The PS Vita’s size is very handy as it’s 7 x 3.25 inches and 0.7 inches thick (The Slim version is slighter thinner). To compare it to other devices it’s bigger than an iPhone 5 but the same size as many Android phones (and now the iPhone 6 Plus), and fits into a back pocket easily. The curved design looks cool but it’s more than just aesthetically pleasing as the curves are perfect for gripping it with its controls layout. There are two analog sticks, one directional pad and 4 face buttons in the usual PS controller fashion. The two analog sticks are sturdy and may take some getting used to in terms of their size but the full range of motion is smooth. The two triggers at the top are well placed but they feel more like the L1 and R1 buttons due to the shape. The 5-inch touchscreen (16:9) has a resolution of 960 x 544 and can be used in lieu of the standard controls, and is as responsive as any tablet or smart phone. But there’s also a rear touch pad that is just as responsive and can be divided into four segments depending on the application or game for extra control. There are also built-in sensors so there’s tilt control. The rear and forward facing cameras are capable of only 640 x 480 pictures so it offers the bare minimum in that category. At the top of the PS Vita are two slots, one for accessories and one for a game cartridge. There’s built-in wi-fi and 3G service is currently available through AT&T. The PS button on the front is basically the home button and lines up all your currently open apps so you can select the home screen. The start and select button need no explanation although the latter becomes the screenshot button when using remote play with the PS4. Just the sheer number of controls is impressive as it offers full touchscreen functionality but the real buttons replace the frustrating virtual controller that exists on some mobile games. I’ll get back to the controls when dealing with the games and how they can be utilized.

Setup Is A Breeze

Setup is very simple with there being the usual update file that has to be downloaded, and you need to create a PSN account for free if you don’t already have one. After this the Welcome Park is suggested and it’s basically a starting point to become acquainted with the capabilities of the Vita through a series of simple games and tutorials. The home screen layout is no different from the standard with all your apps displaying as icons on various screens you can swipe through.

It’s a neat little innovation to close apps by swiping from the top right corner as if you’re turning a page but the important thing is I never had any noticeable performance slow down due to having multiple apps open. And yes, there are all the usual apps you can expect, Netflix, YouTube, Facebook, and you can also have your email accounts and calendar apps synced to the Vita too. But of course the purpose of buying a Vita wouldn’t be to have a smart phone without the phone but for gaming, and this is where the PS Vita is impressive. The AR cards that came with it are supposed to be for Augmented Reality gaming, which would merge the real world and the game world but I haven’t made much use of it so I won’t elaborate on that more. It has potential but I’ll wait for better games.

The first game that I played was Uncharted: Golden Abyss, and this game was excellent in displaying the capabilities of the Vita. The graphics were impressive and surprisingly crisp overall. And since this game was designed for the Vita it would make use of all the controls, which felt good and were very responsive. In addition to the standard controls there were numerous situations that required the Vita to be tilted, such as walking on a balance beam, And extensive use of the two touch screens was required with the front touch screen used for QTEs, climbing if preferred, and solving puzzles, while the back touch screen used to rotate items you’re viewing and clean them to get a better view. None of the controls felt gimmicky, although I preferred the sticks and buttons when climbing over the touch screen. And this was a relatively long game and similar to what would be found on a console. Check out my complete Uncharted review for more about the game. I tried a couple of fighting games, a RPG as well as Indie games and the controls were all solid.

But where the PS Vita really shines is with its remote play feature. So if you own a PS3 or PS4 you’ll be able to play all your games on the go, and this requires wi-fi or service through AT&T. I was skeptical of how well this would work, and of course it worked seamlessly at home so if you ever have any issues regarding use of the TV this is very handy. However I was thoroughly impressed with how well this worked outside of the home, and I even played through Wi-Fi from another state with zero lag with my PS4. I’ve played Destiny, The Last of Us and even Watch Dogs with no issue and the graphics still looked incredible. The controls vary slightly due to the lack of R2 and L2 buttons but each game adjusts with either the use of the front or rear touch screen. Destiny, for example, has the top left of the touch screen as L1, top right as R1 and the bottom middle as the touchpad for the DualShock 4. And it actually feels really good to use a melee attack by touching the screen. So the PS Vita essentially has the entire PS3 and/or PS4 gaming catalog if you have a network connection and I don’t have to stress how beautiful this is especially if you’re a gamer who is on the go often. And with a battery life of around 4-5 playing hours and a standby mode that lasts almost a week, you won’t have to worry about only being able to play extensively if there’s an outlet nearby. You can even take screenshots for the PS4 just by pressing select. And you have available all the features of the console you’re controlling remotely. And it’s easy to use since there’s only a one time set up and an icon on the home screen for one touch access. And the network feature even works with your PC but requires Content Manager Assistant software, which is a small download, and allows you to transfer files and photos.

Not Without Its Downsides

Games, games, games. I love my PS Vita and that’s largely due to the fact that I own a PS4 and can play all my games on the go as long as I have a connection. However, when I first purchased my PS Vita I thought I would have an extensive gaming catalog to go through at some point. That hasn’t been the case and despite the hardware being very impressive to me, not much can be done without gaming support from Sony for new games. I have other devices to use to watch Netflix, browse the internet or check my email. Also, the pricing for the memory cards are relatively steep and since you can fit about one full game like Uncharted on a 4 GB memory card, you won’t have much space for digital games unless you shell out more money for the larger memory cards. And limiting service to just AT&T has its drawbacks. So when I think about the Vita without access to all the PS4 games and I compare it to the latest smartphones and all the available mobile games for them it becomes harder to make a case for it being a necessity for gamers. Smartphones have a large variety of available games and not just the free-to-play variety, which I enjoy, but those that can be purchased for cheaper than Vita games and still offer a solid gaming experience with top-notch graphics. However, the Vita has to its advantage the full controller setup, TWO touch screens and a battery life solely for gaming. It just needs a more impressive gaming catalog and then it’ll be in a league of its own.

The PS Vita is an impressive piece of hardware that is only limited by its paltry gaming catalog but if you can use remote play with your console, it becomes amazing and a must own. The graphics are surprisingly good, the battery life is relatively decent with an incredible standby time, although I have an issue with battery life for mobile devices in general. And the control layout feels great and offers a smooth transition for all PS4 games. The price of the memory cards can be off-putting but that just limits digital downloads because the saved games files will fit on just one, and can always be transferred to a PC through direct connection or over network. But without remote play or network connection there aren’t many new titles that would be enticing on their own for another system, so if the titles improve then the Vita could be the hottest handheld out there. Since I can use remote play, I love my PS Vita.