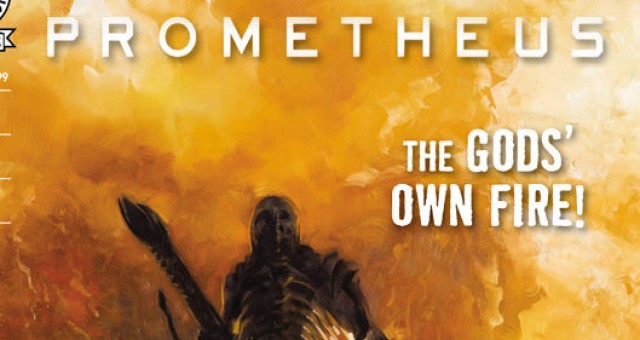 So here we are at the end of the story arc in Prometheus: Life and Death #4, and it sure hasn’t been easy for our intrepid humans. Escaping one battle to end up LV-223 thanks to an awakened Engineer is never an ideal scenario. After running into a couple of survivors, they now look to escape the planet with Aliens and two Engineers threatening it all. It’s a simple plan; all they have to do is steal the Engineer’s ship.

Things start off rather quiet, with Foster and a couple of the survivors preparing to leave their home. It wasn’t touched on much, but the whole set-up gave out a Walking Dead/Terminator resistance vibe. Cool stuff, perhaps a missed opportunity but there are only so many panels after all. As they prepare to leave, there is a decision to be made with Jahlil whom is still nursing injuries. The marines want to bring him along and Galgo wants nothing to do with that. Travel light and move fast is all he is worrying about. “I won’t make apologies for Galgo,” Foster says, “his pragmatism borders on the sociopathic.” And that’s why we love him so much. 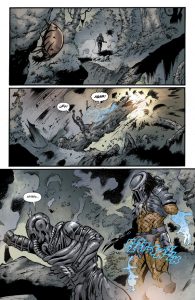 From here on it turns into an express elevator to hell, going down! Some great character moments from the remaining characters. Foster, who has become a favorite of mine, has really stood out the last couple issues. Here’s to hoping he survives this ordeal. Foster and Galgo are always awesome; I’d get a kick out of seeing them interact with Zula Hendricks from Defiance. Ahab has settled into a Boba Fett type role, the badass we all want to get more screen time. The mystery vibe the Engineers give out is maintained throughout the series, and they constantly feel like beings more powerful than us all.

This was a strong series all around. Dan Abnett juggled every species (Xenomorphs, Predatrors, Engineers, and humans oh my!) brilliantly in Prometheus: Life and Death #4. They all had time to shine and the story kept a nice flow. The visuals kept things alive as well, Andrea Mutti’s environments felt organic and put you right in the story. Aliens: Life and Death is on deck, I hope the quality continues. Stay Frosty!