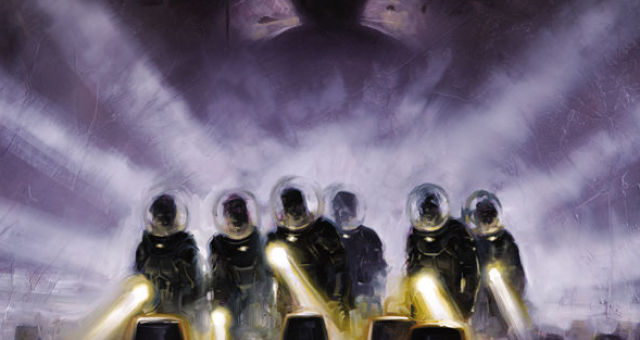 At long last, Dark Horse Comics has resurrected the Aliens franchise. I used to look forward to every issue in the Aliens and Predator line because Dark Horse at times put more love into those two franchises than Fox, it seemed. Now they are all back in a big way. A story arc involving Prometheus and rebooting Aliens, Predator, and Aliens versus Predator is being introduced. This is an ambitious idea that could pay off dividends if pulled off correctly. Prometheus: Fire and Stone #1 is the leadoff hitter for the series, and it is written by Paul Tobin with art by Juan Ferreyra.
Prometheus was one of the more controversial sci-fi movies to release in the last few years. Its take on religion and creation coupled with its loose connection to the Alien franchise left viewers split. This is the first time Prometheus has been introduced into the comic book realm with new material. I think the world has tons of potential and am looking forward to see what’s next.
It all picks up about 129 years after the events in Prometheus, and the harrowing events that took place on LV-223. Much like the movie, the comic starts off slow. Clara awakes from cryosleep to introduce us to the crew. There is some nice banter here, and some of the characters seem interesting. Francis Lane is an astrobiologist (pffpptt who isn’t these days?!) who also happens to work on synthetics as a secondary job. Synthetics always seem to play interesting roles in this universe that’s for sure. 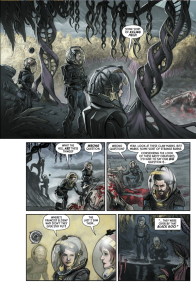 As the book continues, we meet the other members of the crew and get more a sense of what’s going. Not everything is as it seems. Angela, the leader of the expedition has her own secrets as to why she’s decided to explore LV-223. She should be an interesting character to keep tabs on.
Throughout the book, Tobin’s writing is sharp and seems to have a grip on the universe’s feel. Ferreyra also does a nice job complimenting Tobin with some excellent artwork. It’s the right amount of edgy and futuristic to bring Prometheus into comic book form.

The world of Prometheus is filled with massive potential and Fire and Stone does a nice job of expanding the universe. As the characters are fleshed out more and the plot begins to reveal itself it should get even better. The surprise at the end was a plus as well, a good tease until the next issue.