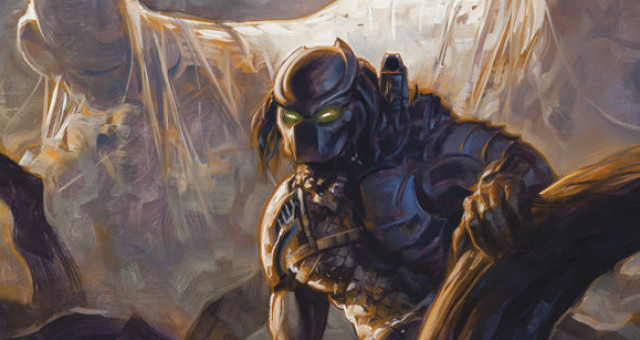 Once again it’s a good time to be a fan of the Aliens, Prometheus and Predator franchises! After a divisive return in the Fire and Stone series we quickly return back to this universe in Predator: Life and Death #1. With this and the upcoming Aliens: Defiance series, Dark Horse is keeping the fans busy while we await the next films. The hunt begins again…

We begin with our first two main characters, Mr. Lorimer a Weyland Yutani representative, and United States Colonial Marine Captain Paget discussing the mission. Paget being a female is a nice touch as strong female leads tend to be the strength of these franchises. Lorimer informs her that the mission is nothing but a “standard compliance investigation”, but she is smarter than that and Lorimer reveals LV-797, aka Tartarus, is a WY territory schedule to be terraformed. But it looks a rival company by the name of Seegson (yes!) is prospecting illegally on their grounds. Awesome! For those wondering why I’m geeking out right now, Seegson was the guilty party behind the shenanigans in the brilliant Alien: Isolation. Now we have a nice tie-in between the game and comics universe.

There are few things that make Aliens fans squeal in delight more than the Colonial Marines, and they are finally back. And it’s glorious. Paget warns the crew that this mission isn’t like the Lightholme Campaign, which she alludes, was a bit of a shooting gallery. The dialogue and banter by Abnett all feels familiar without being a carbon copy. However, I got a kick out of an amusing nod to the Sulaco crew. We don’t get an introduction to most of the motley crew (either saving it for later issues or they’re cannon fodder). The exceptions are Freebody who apparently has an itchy trigger finger and Jhalil who has a filthy mouth. He’s told to keep his filthy mouth in check with a WY rep around, which works for some funny gags throughout. Abnett introduces a USCM scout vehicle, a nice addition to the armory. And the design makes sense, fitting in with the gritty theme.

The Marines discover an abandoned Seegson research station, and have to land at a secondary site since it seems they’re trying to hide from a Predator, one of whom witnesses their landing.  They fan out the area and find one survivor,  Laurence Goode, who doesn’t seem too keen on being rescued. He warns that the planet belongs to “them” and USCM now do too. It’ll be interesting to see what Goode’s motives are such as why are they really on Tartarus? Did they know about what could be there?

The USCM and their new buddy then discover something they’ve never seen before: a horseshoe looking ship not constructed by any man. Is it a Juggernaut? Could the Predators have transported it from LV-426? Or is it just another from the Engineer’s fleet? Before we get a chance to find out, the Predators move in to protect their property and slaughter some Marines in glorious fashion. The design of the Predators shown is new but I won’t spoil anything else so you all can judge for yourselves. On the whole, I like what’s been done and they look and act like true badasses. 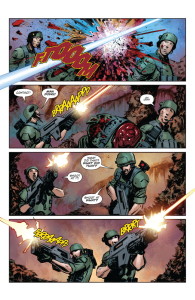 Dan Abnett lives up to the hype and delivers a fantastic story in Predator: Life and Death #1. He seamlessly introduces a new story, characters, and even Alien: Isolation into this expanding comic book universe. Every panel is written in detail, and franchise diehards will appreciate this. Brian Thies pairs up the writing with some excellent visuals, and this issue looks and feels gritty. His artwork keeps the tone perfect for the issue. Issue #1 is an excellent table setter for the series and I eagerly anticipate the next part.