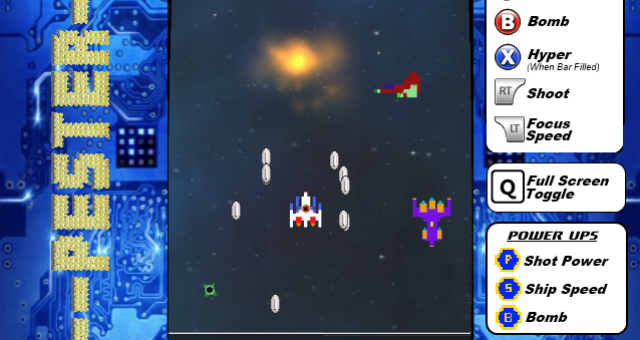 Pester is a vertical shoot ’em up developed by Flump Studios and aims to capture the attention of retro shmup lovers everywhere. You take control of a spacecraft and have to fight through endless waves of enemies, space debris and bosses with one goal in mind: Survive. That might sound easy but the various enemies you face are determined to cause your destruction and attack you in unison with some attacking straight on while others stay back to destroy you from a distance. If you survive that you still have bosses to contend with and each requires a different strategy to defeat. But it’s not hopeless because you’re able to get some help along the way in the form of power ups and bonuses, and most of all, you have the best damn ship in the galaxy.

Pester is a retro shmup for all intents and purposes with its simple controls but has many different modes available to change up the game play as well.  Gameplay is definitely geared towards a game controller but it does have keyboard support available. (I used a controller at all times.) You can move around freely on the entire board whenever you want and this is necessary to dodge the many ships, projectiles and debris coming your way. It wouldn’t be a shmup if you couldn’t blast your way through any enemy coming your way and the game provides you with 3 bonuses, ship speed, shot power and bomb, to help you dodge and destroy everything in your path. The ship speed bonus is automatically applied when you collect the power up and it’s stackable up to three times. As the game speeds up as you progress this is almost a necessity to survive in later waves. There’s also a focus speed button that slows you down and allows you to fine tune your movements in tighter situations.

Shot power, of course, increases your ship’s attack power and is only stackable up to two times. This is automatically activated as well and is noticeable through the changing of your ship’s projectiles. And the bomb bonus is a one-time attack that destroys everything on the screen instantly including any enemy projectiles. This is extremely useful in emergencies when you’re surrounded by enemies and have nowhere to go. You can store up to three of these as well. That’s not all your ship has because when you destroy enemies they leave behind coins that when collected up fill up your hyper bar and when it’s full you can activate hyper mode, which not only destroys everything on the screen due to your powerful projectiles but also sucks in all the coins until the bar is fully drained. If you’re destroyed before the hyper bar is full it resets completely. However the Ship Speed and Shot Power boosts only decrease by one.

The enemies you face vary with some shooting projectiles in every direction while flying vertically or horizontally, some stationary while shooting projectiles and others just flying towards you attempting to destroy you through direct contact. You have no shields so one hit and you’re dead. Some enemies require more than one hit depending on your Shot Power and some waves you can’t complete until you destroy the stationary enemies. If you successfully defeat a number of waves you have to face a boss and yes each one is different. You can’t destroy them with one bomb so you’ll be required to fight each one differently by observing the patterns. I found the bosses to be entertaining and they were a change in pace from the waves of enemies. 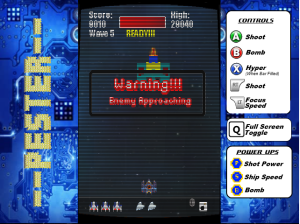 The controls overall were super responsive and with the speed of the game at times I can’t stress how important that was. It doesn’t take long to get used to the different enemies and the different types of projectiles, although early on, and occasionally later after having experience in this game, the quick explosion that occurred when destroying an enemy could block the view of a projectile long enough for me to not notice it until it was too late. And when you get to the later waves even with all of your lives it becomes even more important not to die once. Losing the power ups can make it extremely difficult to get any further along because you’re at a disadvantage and can only hope another power up comes along very quickly. There is no way to replenish your lives and to have an option for that, even if it meant completing 20 waves would’ve been useful.

With all the different modes available there’s something here for all lovers of shmup games. It’s separated into two main categories: Arcade mode and Tempus mode. And each one has sub-categories of classic, survival, asteroid belt and boss mode. Arcade mode is the standard mode of play and Tempus mode adds a countdown timer and instead of collecting coins you collect clocks to replenish this timer. If you get killed 10 seconds is deducted and if there’s less than 10 seconds left on your timer the game ends. 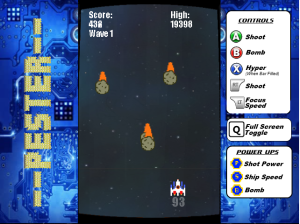 Classic mode is available for both Arcade and Tempus at the start and you have to unlock survival, asteroid belt and boss mode by achieving a certain number of points. However if you unlock survival mode in Arcade it’s automatically unlocked in Tempus too. Survival mode raises the stakes and gives you only 1 life and there is no hyper mode or bombs. The shot power is at max so you don’t have to worry about being at too much of a disadvantage. I found this mode to be very entertaining because even though you only have one life the max power makes blasting through the waves even more enjoyable. Asteroid belt mode has no enemies and no weapons whatsoever. The objective is to dodge waves of asteroids and the only thing available to you are ship speed boosts. This was enjoyable too and definitely helps you improve your handling of the ship. And the speed at the higher waves is definitely something to be experienced. Boss mode is exactly how it sounds with you solely fighting one boss after the other. So if you prefer this over the waves of enemies you can play this at your leisure. However you can only play this mode after scoring a certain amount of points in each of the previous 3 modes. 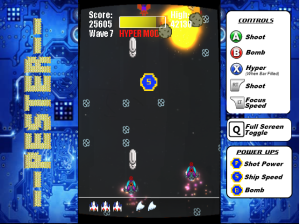 Pester also has a number of modifiers you can apply to each game type and my favorite by far was duo mode. In duo mode you control two ships with each stick and trigger controlling one ship. I thought it would be more difficult than it actually was but it was a blast both literally and figuratively.  This mode was well-designed and as much as I enjoyed hyper mode in the classic game play, it had nothing on Duo hyper mode and this was one of the most badass moments I ever had playing a shmup.

Pester is a very entertaining shmup that with its multitude of game play modes should have something to satisfy lovers of retro shmup games. The controls are simple and so are the graphics, although it could take a minute to become accustomed to spotting projectiles faster in the midst of an explosion. The waves stay the same in many of the game play modes but the familiarity can be important to advance to later waves with minimal loss of lives. And with the number of backgrounds, ship types and music that can be unlocked you can play multiple times while enjoying the cosmetic changes. If you enjoy retro shmups then I definitely recommend Pester and if you’re not necessarily a fan of shmups but occasionally play simple games to pass the time you should give Pester a try. It’s available for only $1. For a demo or to purchase Pester visit the official site.