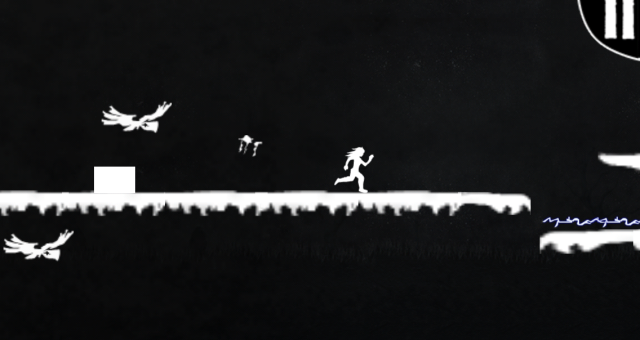 Past Memories is a running platformer developed by Give me Five and is the story of a woman trying to escape the nightmare of her oppressive past while avoiding the memories, which have taken shape in the form of various silhouettes. Even though she cannot fight them directly and they come from all directions, she’s not completely helpless as there are items throughout that aid her and give her an advantage over her pursuers. And since it’s her world, she can activate a mechanism that allows her to change dimensions from light to dark, and as a result directly affect the nature of her pursuers. But they’re relentless as you’ll encounter bosses who will make things harder for you at every turn. Can you avoid all the obstacles in the way as the protagonist, and escape her nightmarish memories in silhouette form, or will you succumb to the overwhelming burden of these past memories?

Past Memories starts quickly and before you can admire the simple yet elegant noir graphics you’re faced with your first obstacle to jump over. The protagonist is constantly running forward so you don’t control her forward movement or her speed but you have to time the jumps properly to avoid enemies and cliffs. You jump by touching the screen and the longer the touch the longer the jump. There’s no tutorial so you’ll have to learn on the fly how to interact with objects and what each object does.

You don’t have lives so there’s no limit to how many times you can die although the game does keep track of how many times you died and shows you at the end of the level. I was excited for the release of this game and the start of it was what I expected in terms of the graphic style and the atmosphere, and the premise was captured wonderfully. The jumping mechanism works, which is crucial since it’s the main gameplay mechanic and the landing animation varies depending on how far or how high you jumped. I didn’t notice any discernible difference between her rolling after landing or not rolling in terms of creating more distance between her and her pursuers but it is possible to do so by jumping to a higher level or falling to a lower level.  You’re pursued by all types of twisted creatures resembling vultures, wolves and zombies from behind, and in front of you you’ll have to avoid spikes, a mist to slow you down, or even electrified platforms at times. Not all objects are hazardous as you can run across a trampoline and be propelled forward, and there are various power up items scattered throughout the levels and they worked seamlessly, and this added an interesting layer to the gameplay mechanics.

You’re only allowed one item at a time and if you pick up an item while in possession of one it’ll be replaced. Two of the items stop pursuing enemies by either putting up a wall or dropping a bomb, while two others modify your movement either by protecting you with a shield or giving you a jetpack. The items can be life-savers and the shield is easily the most useful as you’re protected from harm (unless you fall off a cliff) but the jetpack is the most fun. You use it the same way you jump by touching the screen and the longer you hold it the higher you go. However if you stay up too high you can be completely unaware of your surroundings and it’s wasted if you land on a hazardous object and die. The level design, fortunately, has checkpoints and works well in terms of being consistent with the theme of the game and the game play mechanics. Certain obstacles reset when you die so if you come across parallel platforms with an alternating electric current you’ll be able to navigate it successfully if you didn’t get it right the first time. Since you can’t speed up or slow down your speed directly (and it’s not wise to do so by jumping since you have pursuers) you have to choose carefully which platform you want to take to avoid being electrocuted.

In the later levels the potential of the game shines even more because the level design incorporates all the various elements in one stage. It is satisfying when you get on a roll, successfully avoiding obstacles while navigating the level and using items to slow down pursuers. And it’s even more satisfying when you have a number of pursuers and you successfully activate a switch to change dimensions between light and dark, effectively ending all pursuits, while the background music adds to a sense of triumph, even if temporary. The bosses add slightly to the environment and aside from their size and endless pursuit, they are easily avoidable in the same way as other obstacles. There are only five levels and as soon as it becomes more enjoyable it ends…for now. There is some replayability value as you may want to explore higher paths on a specific level or try to beat a previous time on a level since the game does keep track of your stats.

Past Memories is an enjoyable running platformer. The story itself is told through the gameplay, the noir-style graphics and the captivating music that changes for each level. It’s not difficult to become accustomed to the level in order to navigate successfully and since there is no limit to the number of lives you have, it becomes less challenging since you can just keep restarting at a checkpoint until you get it right. The nightmares that pursue you come in all different shapes and you actually have to pay attention to their patterns in order to create more space between you and them. The power-up items and collectibles add another layer of enjoyment, and the changing of dimensions is an extremely satisfying (and unique) gameplay element. If you’re looking for an enjoyable mobile game to play on the run I recommend trying Past Memories because the experience is different, in a good way, from other platformers currently out there.