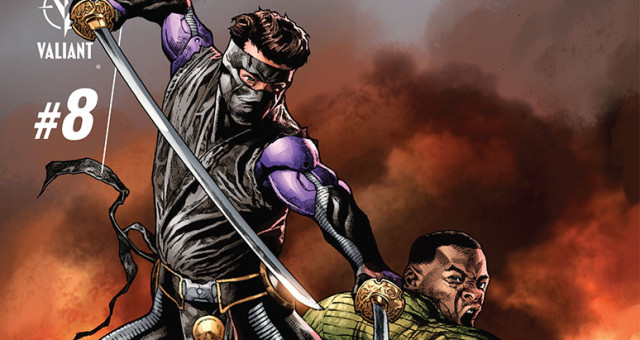 Ninjak #8 continues with him coming face to face with Fitz, another Weaponeer operative. It opens up with Fitz explaining how he woke up with distorted memories inside a laboratory, and all he could initially remember was that he was recruited to be a bodyguard for a doctor. He would remember learning every form of martial arts and almost every language known to man but he would be shocked by the biggest revelation: he was just one of many clones. And the doctor who recruited him was none other than the insane Dr. Silk. Fitz is able to make his escape after fighting and killing another clone but he had nowhere to go after this. So he made his way around the world learning different cultures and understanding what it means to be alive until he heard about the Undead Monk and made his way there. He never met Ninjak there but that’s not the only thing the 2 share in common. Despite being a Weaponeer operative they both have a hatred for the organization and work to destroy it from within. But is Fitz an ally Ninjak can trust or is he in too deep? And with MI-6 considering him rogue and sending other agents after him, how much longer does Ninjak have to take down Weaponeer?

I was really looking forward to the Shadow Wars story line due to the way Kannon and Roku’s characters were developed, and as a result, Weaponeer came off as a very dangerous organization that would require Ninjak to use everything at his disposal in order to be successful. So even though this has been a fun series Weaponeer hasn’t come off as this unstoppable and impenetrable organization as it would have seem. This is due less to Ninja’s formidable skills as much as it’s about the way the other members in the organization have been defeated and MI-6’s response to Ninjak’s infiltration. MI-6 wanting to send additional agents to retrieve Ninjak just made the overall mission seem less daunting. However, as individual stories these issues have been fascinating. And so far out of the 3 this one was the most enjoyable.

This issue started off chronicling Fitz’s story and it was pretty captivating. It wasn’t just his story but a story about his connection to Kannon and the creation of Weaponeer. The Undead Monk has served as a connection between all the characters, including Ninjak, and even he became more intriguing due to Fitz’s story. I was really engrossed in this, and the character development was on point. The expansion of the mythology of the Undead Monk has paid off tremendously. And Matt Kindt’s ability to write enjoyable characters was clear with the creation of Fitz. And I won’t give away any spoilers but I would’ve liked to see a better result with him especially considering the initial fight wasn’t shown. 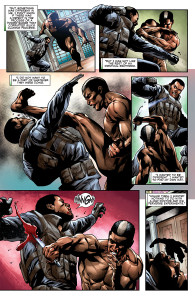 There was an interesting twist with Neville and Ninjak at the end of this issue that has me intrigued about the remaining Weaponeer operatives but the real gem in this issue was the second story detailing Ninjak’s interactions and training with the Undead Monk. Delving into this world was an absolute treat and I was completely immersed in every trial Ninjak had to face including the shocking battle and all he learned. This second story alone made this issue a must read for all Ninjak fans.

Ninjak #8 is an engrossing issue due to its character development and expansion of the world and influence of the Undead Monk. Fitz is an interesting character although the end result with his situation isn’t nearly as intriguing as he is. And the second story chronicling Ninjak’s journey and training with the Undead Monk is gripping and intense. So even though Weaponeer as a whole doesn’t come off as a more intimidating organization, Ninjak’s world is such an entertaining one that Weaponeer seems like a small part of it.