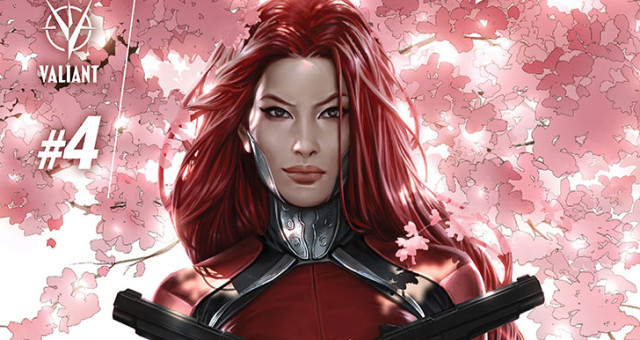 Ninjak #4 reveals the backstory of Kannon’s deadliest bodyguard, Roku, and how she acquired her unique powers. Roku has proven to be Ninjak’s toughest opponent after making it back to Kannon before he did, and revealing his identity as Ninjak and not just a buyer of weapons in the process. Concealed in her thoughts is the belief she knows Ninjak long before this, including his real name, but can’t quite remember how. Ever since the process that gave her the unique abilities she uses to serve Kannon she can’t remember anything prior to that. She remembers being selected for a mysterious ritual at a monastery because of her characteristics, and this ritual was connected to a dark spirit that granted wishes for a steep price. Her purpose was to become something else, something powerful for her organization. However she was killed as part of this ritual and remembers waking up in the dirt not knowing her name in an even more mysterious place. She could feel thousands of lost souls around her as everything around her was changing physically, and she could see no way out of this endless cavern. Who is Roku? And what is her connection to Ninjak? 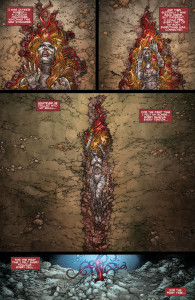 Last issue was nothing short of incredible, especially with the ending, and I couldn’t wait to see Ninjak’s response to Roku and Kannon. And since Roku has been such an intriguing antagonist and straight up badass character, I figured I would enjoy an issue that established her backstory and gave more insight into the character. So this issue was successful in creating an interesting backstory for her, and just being entertaining all around, but if you’re not into Roku then this issue just might change your mind. There’s little story advancement from issue #2 so if you were to skip this issue and just pick up with #4 you wouldn’t miss a thing in terms of what happens to Ninjak next. But you would miss a potentially important connection between Roku and Ninjak, as well as some of Ninjak’s backstory. I must warn that the tone of Roku’s story is more supernatural than the series has been to date with none of the familiar trappings of Weaponeer or unique technology in every issue. However it was still an engrossing story due to Roku’s struggle with her identity despite seemingly volunteering for the ritual. So the character development from the start to the end of Roku’s journey was entertaining (and twisted) as she had to confront different beasts standing in her way to gain her new identity. Aside from the last one there wasn’t much to learn from each one other than what Roku learned about her new abilities. Maybe some insight was also given into Weaponeer as an organization but that connection, if any, won’t be revealed until another issue and no spoilers from me.
There’s a short story at the end of this issue that is highly enjoyable, and I suggest reading it because it adds more to the overall understanding of the characters and organizations currently in play. Now I just need the current story to continue next issue.

Ninjak #4 successfully takes a badass character in Roku and creates a wondefully twisted yet entertaining backstory. Seeing her learn how to use her powers for the first time as a matter of survival is pretty intense. And her journey to discover her new identity also opens the door to more supernatural and spiritual elements. Although the overall story arc didn’t advance, the second short story in this issue served as an additional treat in building up the world being introduced to Ninjak. Definitely looking forward to next issue.