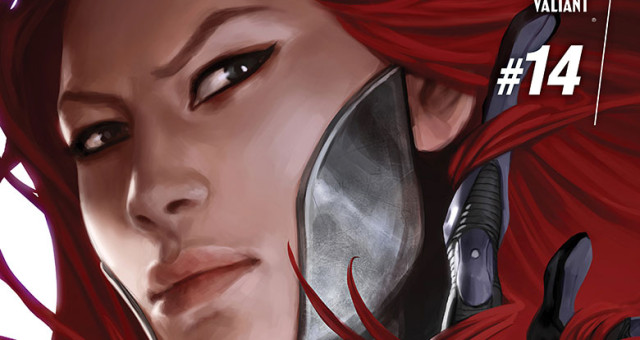 Ninjak #14 is the first issue in the Siege on King’s Castle story arc and opens up with Ninjak recovering from his latest mission to the Deadside. It’s been awhile since he’s been able to regroup in his castle and be able to focus on his training and clearing his mind. However, when he does he realizes that he’s missed some telltale signs of intrusion in his castle and realizes that someone was able to bypass his security and plant explosive devices all around. He rushes to the safe room knowing that’s the only place that could survive such an explosion, and he’s helpless to stop all of his possessions, including his tech and weapons, from being destroyed. When he emerges from the rubble that was once his home he knows that he has to go see one he trusts to be able to help him and that’s Neville. Yet he realizes that the plot against him runs deeper than he initially suspected when he notices that all his emergency stashes have been compromised as well. Somehow it only gets worse when he arrives at the MI-6 building only to trigger an alert about being one of the most wanted criminals in the world. How is it possible someone was able to compromise Ninjak’s identity so thoroughly? And who can he trust to help him? 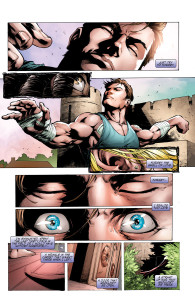 I’ve been looking forward to this story arc since it was first announced and the start of this issue didn’t disappoint. The way Matt Kindt plunged Ninjak into the midst of chaos and scrambling to figure out what was going on was excellent because it gave the reader an entertaining sense of how this was all affecting him. Every shock Ninjak experienced when he realized something else was compromised was conveyed wonderfully and I was fully immersed in this adrenaline-filled sequence. The nonstop action showed how resourceful he could be but also made those behind this remarkable feat even more intriguing.

I admit there have been times when I wondered how Ninjak’s identity was a secret in certain circles because of his high-profile actions and life. However this story started off so riveting that I was left in awe of how his identity was so thoroughly compromised. This was due to MI-6 being compromised as well and it was unclear at first if the intrusion originated through them or if that was just another aspect of the attack on Ninjak. I did find it slightly weird that Neville would behave the way he did but I trust in the writing and the potential in their interaction for further development as the story arc unfolds.

Even though this issue had plenty of action the story did move forward in an exciting way. I won’t give away any spoilers but I enjoyed Livewire’s appearance and the way she was incorporated into these events. And it was even better to see Ninjak’s search for answers and the reader being rewarded with at least a taste of the truth of what was going on. I’ve loved the way this series has built up to this story arc in various ways whether it was revealing more of Colin’s past or his connections to shadowy organizations. And for all the hype leading up to this story arc I’ll say this issue was a tremendous start.

There was a second story at the end of this issue and at first it felt like a routine old school spy story with the unnamed couple hunting down terrorists from the Munich massacre at the 1972 Summer Olympics.  It was entertaining in terms of the way the story unfolded but nothing was truly memorable about it until the last page. It definitely piqued my interest and hopefully it can hold it throughout its run.

Ninjak #14 is a promising start to the story arc and is successful at creating a thrilling atmosphere filled with intrigue and great action. It’s engrossing from the start with Ninjak being thrown into one situation after the other while realizing just how much his identity and life is compromised. Thankfully this issue also has a lot of story progression as well, utilizing Livewire and well-timed answers to keep the story interesting. And the second story at the end of this issue starts off relatively routine but the ending is enough to make me want to know more. Now I can’t wait for the next issue.