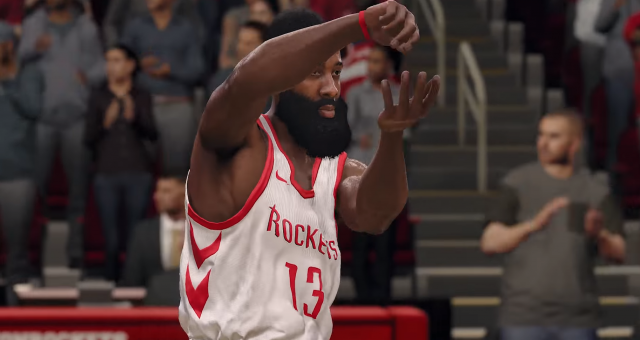 Yes, the NBA season is ¾ done and the game has been out for months. This isn’t the ideal time for a review. But sometimes circumstances change and one must call an audible. I purchased NBA 2k on release day for my Nintendo Switch.  The idea of playing it everywhere was impossible for me to resist. But after putting many hours into it, 2k just doesn’t have it this year. The microtransactions, inconsistent shooting mechanics, overwhelming controls at times, and an overall feel of style over substance wore on me and I stopped going back to it. I heard whispers of NBA Live 18 being fun this year, but ignored it. When the price dropped to an absurd $4.50, I decided it would be an intriguing purchase for my shiny new Xbox One S. And here we are.

Folks, NBA Live 18 is the best kept secret in sports gaming right now. In terms of gameplay and fun it outshines 2k this year. In the words of the Degeneration-X theme song, let’s break it down.

Gameplay: Fun! EA stripped it down to basics. No Street Fighter controls, no need to memorize move combos just to try to run your offense. You can perform combo moves with the right stick then modify with the Sprint button. I enjoy the passing mechanic. There is an unobtrusive pointer showing who you’re facing, which minimizes passing it to the wrong person. I am a huge user of icon passing and I rarely use it in Live due this little touch. Most of my turnovers now are due to my reckless play instead of game mechanics.

The shooting is responsive as well, leading to less frustrations. Many times in 2k, my timing would be there but the player still proceeded to lay bricks. As a bonus you can adjust the shot timing to Skill, Rating, or Skill + Rating. Pretty cool. Defense is enjoyable as well, my favorite is snatching a shot out of midair.

Presentation: The ESPN license is well used. For you fellow NFL 2k5 players, you will get the warm and fuzzy feelings when playing. The commentary gets repetitive, but Jeff Van Gundy and Mike Breen get the job done. It’s especially satisfying hearing Mike Breen’s signature “BANG!” when you hit a big three. Half-time and post-game shows are great. Jalen Rose runs down game highlights like a TV broadcast. The Top 3 plays is a great touch.

Career Mode: This is worth the price of admission. Keep in mind, I NEVER play Career Mode. Even when 2k was churning revolutionary MyPlayer modes it was unable to grab me consistently. However, Live hit paydirt here with their mode titled “The One”. You know the drill: create your character, choose your play style and then hit the hardwood. The story goes that you were once a wunderkind draft prospect whose career is ruined by an injury and now must make his way back. The story is told with awesome ESPN First Take cutscenes. After getting through the initial part of the story, the game begins to open up. You’re not relegated to one story path. You feel free to pursue the NBA path or become a street legend.

Since I named my dude Billy Hoyle, I’ve played a large portion of my games in the street ball mode. Both are tons of fun, with message interactions between Coaches, agents, friends, and players. And the best part? No over reliance on micro-transactions! As you play you earn points which can be traded in for prize boxes filled with different outfit parts. Another strength is you have control over your teammates. It’s easy to call for a pass or have them shoot. I am not exaggerating when I say NBA Live 18 is worth picking up just for The One. EA struck gold here.

Ultimate Team: If you’ve played any of this mode before, you know what to expect. Pick a team, get some starter players and build it up. There are weekly themes, a training camp, a heroes and a master mode. It’s strangely addictive adding players to your team, and it’s rewarding seeing it build up from a bunch of scrubs to a team of ultimate badasses. Winning certain events awards you with a limited games player, so those players are to be used wisely. I just won a Clyde Drexler, so he will be saved for key matchups. But why can’t I view the box score of my Ultimate Team Games? Weird.

WNBA: It’s great that EA included them. And it’s about time. It’s fun to play and to see the ladies represented in digital format. The player models and arenas look great. EA put a lot of work into it and it shows. Too bad all you can play are exhibition games. Maybe next year they can implement a season or at least a playoff mode.

Since NBA Live is a franchise making its way back from the dead, all is not perfect. I must go over where it misses the rim completely.

Franchise Mode: It’s terrible. The mode is extremely basic, no trade finder, no player finder, no G-League. With the ESPN license, EA missed a tremendous opportunity to really immerse you in the Franchise mode. During a game, there will be an overlay of other games going on but they never report on any scores and for some reason the games are still yet to be played. If you don’t look for much in this mode or where overwhelmed by 2k’s, this will suit you but this type of effort in unacceptable these days. EA has lots of work to be done here, it seems most of the work went into The One, and it shows. Hopefully, they can fix this for the next iteration.

The game also lacks polish. NBA 2k is not only a gorgeous game, but it drips in polish. Live has made tremendous strides, but there is still work to be done. The animations are great,especially during foul calls but seem to skip in places. The graphics are there, but are inconsistent. None of this ruins the game, but it is noticeable.

Despite lacking the modes and depth of NBA 2k, Live did a ton right this year. It’s a shame it all gotten lost in the 2k hype machine. Which is understandable, but this game deserves some love. Personally, I am having a lot more fun playing NBA Live this year and in the end isn’t that why we play these games?