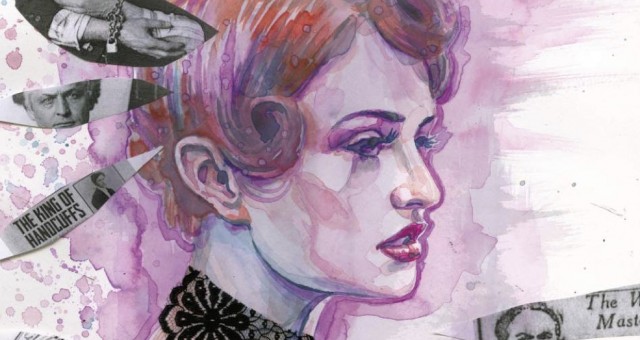 Minky Woodcock: The Girl Who Handcuffed Houdini #1 is the start of a new series published by Titan’s Hard Case Crime comics line. It’s written by Cynthia von Buhler and features Minky Woodcock, the daughter of a famous detective. She has her own aspirations to become a detective but her father has yet to give her an opportunity at his detective agency. Despite her brother’s aloofness, their father has chosen him to be his partner in the agency. So Minky hasn’t been able to show her talents up to this point.

However, that changes with Sir Arthur Conan Doyle walks in seeking help while her father is away traveling. He tells her he has a case involving Harry Houdini. Recently he witnessed Houdini passing through a wall at one of his magic shows but believes there’s more to it. He believes Houdini isn’t just a magician but a spiritualist with fascinating abilities. He wants her to investigate his claims because of the far-reaching implications. Despite her skepticism, she finally agrees. But can she uncover the truth about the master escape artist?

As a fan of the Hard Case Crime line, I always look forward to a new series coming out. The Girl Who Handcuffed Houdini’s premise seemed unique and intriguing. And the opening sequence with Minky writing Agatha Christie for help gave some insight into her background. Clearly she was distraught about her father excluding her from real detective work. But there was also a deeper issue tracing back to her mother’s death. This immediately connected her to Christie but also created questions about how traumatized she still was. An interesting angle to see how susceptible she would be to events occurring around her and creating a mystery about what was real.

Sir Arthur was somewhat of a mixed bag. Obviously he was necessary to give Minky a case and introduce her to that world of spiritualists. I enjoyed how he was a contrast to Minky’s skepticism because he was also an example of how people could fall for such a thing. So his involvement at this point served as an opening into that world. However, his clear connection to the spiritualist wasn’t as evident except the immediate perks of being there. Yet the revelation that this entire case might be nothing more than an attempt by a scam artist to silence critics was intriguing. Especially when it was coupled with Minky’s potential hallucinations. 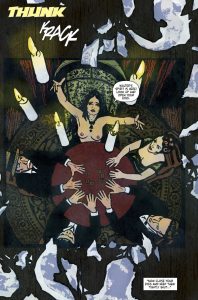 Minky’s decision to pursue Houdini and investigate the claims of him being a spiritualist was believable. It became personal so the story became about more than whether or not Houdini had special abilities. And this is where I appreciated Cynthia Von Buhler’s writing and how this entire scenario was set up. Minky became an interesting character with a potential engrossing story arc. So I’m looking forward to seeing what unfolds next in this series.

Minky Woodcock: The Girl Who Handcuffed Houdini #1 introduces enough elements to create an interesting start to the series. Minky’s strong desire to succeed as a detective coupled with her traumatic past is a perfect fit in the world of illusions. There’s the right combination of skepticism, ulterior motives but also a genuine desire to believe in spiritualists to give the story depth.