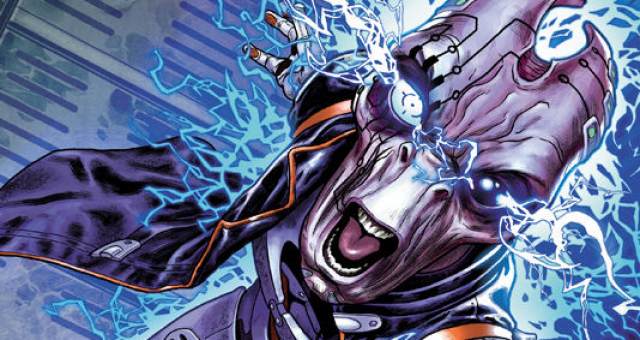 Mass Effect Discovery #2 continues with Tiran and Luna searching for the missing Quarian scientist. It opens up with Tiran communicating with one of his Turian hierarchy contacts. He informs Tiran that there are some doubts about his mission because of the focus on the missing scientist instead of the Andromeda Initiative as a whole. He still gives Tiran that the last known coordinates of a ship carrying the scientist. Tiran believes that locating and interrogating Shio’leth is the key to the uncovering the Initiative.

Immediately after arriving on the planet, Tiran and Luna are accosted by a Quarian demanding to know who they are. It’s initially assumed they’re protesters at the excavation site but they clarify why they’re there. The captain remembers Shio’leth well and tells the story of why he was banished from the Quarian fleet. The captain states that he caught Shio’leth attempting to enter coordinates into the ship’s navigational computers without permission. Shio’leth believed he knew how to find a new homeworld for the Quarians beyond any location previously explored. How is this all connected to the Andromeda Initiative? And what is Shio’leth’s connection to this remote excavation site? 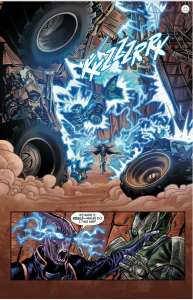 The first issue had so many things going for it. There was an interesting character, a nice little mystery behind the Andromeda Initiative, and potential antagonist. This issue only built on one of those three things and that was the antagonist. However, this issue wasn’t just action because the first part expounded on Shio’leth’s history. This was entertaining because it touched on the sci-fi elements connected to the Quarians. But considering Shio’leth hasn’t made an appearance yet this series it had a limited impact.

I didn’t have an issue with Tiran initially receiving intel from the Turian military because it moved the story forward. When Luna questioned him about the use of an encrypted channel I assumed the story would delve into it a little more. It’s not that I wanted this issue to dwell on it long. It’s just that I wanted the partnership dynamics between the two characters to be explored more. There was a part later where Tiran would make an interesting choice after the action started. But even that could be simply explained as a mutual need. 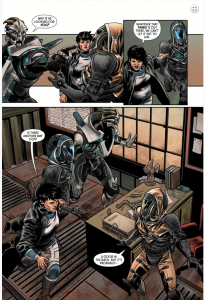 The majority, and best part of this issue, was the action. After an impressive start last issue I wanted to see more of this mysterious character chasing Shio’leth too. Gabriel Guzman’s artwork was impressive with how it portrayed the Salarians biotic abilities. The Quarians were no match for him. And it was just as impressive that Luna was able to hold her own for a little while. I enjoyed this battle for what it was. Unfortunately, it didn’t shed more light on the various players involved in the hunt for Shio’leth or his importance.