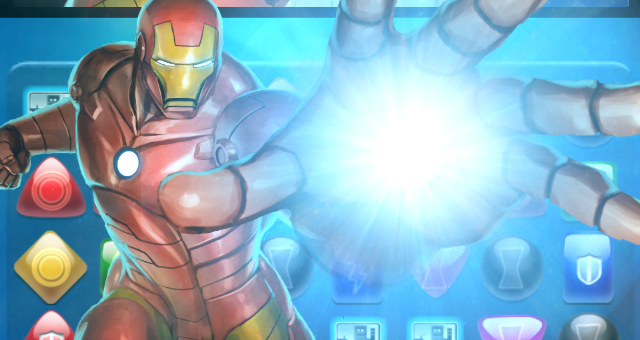 Marvel Puzzle Quest: Dark Reign is a tile matching puzzle video game published by D3 Publisher. Marvel throws its hat into the mobile puzzle game lot in the mold of Bejeweled and Candy Crush but with a story based on the Dark Reign story arc. It all starts when an unknown energy pulse from deep space hits Earth and results in a meteor storm that leaves deposits of a powerful material dubbed Isotope-8 all over the Earth. Even though it’s unpredictable it also has incredible properties and can increase powers or create completely new ones in people. Naturally it would be a hot commodity as the rush is on to collect this material and use it for one’s own gain. One such person is Norman Osborn, who sends his Dark Avengers on a global mission to recover as much Iso-8 as possible.  It’s up to the Avengers to stop him but his Dark Avengers aren’t the only problem. The Avengers will have to contend with all Hammer forces, the Maggia crime syndicate and even an appearance from Dr. Doom. Can the Avengers put a stop to Norman Osborn’s plans or will the power of the Iso-8 prove to be too much for even the Avengers to handle?

Although I was late to the Candy Crush craze when I first started playing it, I did play Bejeweled for years prior to that. So if you play/played either one of those games then you’ll be familiar with some aspects of Marvel Puzzle Quest: Dark Reign. But it’s a much different experience and deeper game play than those two because it has some RPG elements to it. Yes, RPG elements in a tile matching puzzle game. But I’ll get to that in a minute. 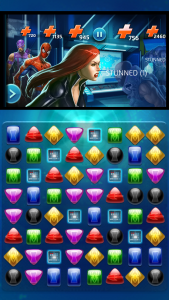 The game starts with a tutorial after you select your character and it starts off very basic. You have to arrange at least 3 matching gems in a row or column in a single move. If you match 3 in a row or column, those 3 are destroyed and the gems shift to replace those missing 3 gems. If you match 4 gems in a row or a column then the entire row/column is destroyed and the gems shift accordingly to replace those gems. If you match 5 in a row/column then the entire row/column is destroyed and a critical gem is created, which can be matched with any gems on the board as the 3rd, 4th or 5th gem. You’ll also get an extra move. So as you complete your turn the enemy gets a turn, and depending on the type of enemy you face this will vary. Even though a brief part of the tutorial has you fighting with one character you’ll usually be fighting with 3 Marvel characters that you can select from your collection. Each gem has a symbol on it and that symbol corresponds to one of your 3 characters. So if you match 3 gems that have a spider on it you’ll attack with Spider-man, for example. If you match 3 gems that have arrows on them you’ll attack with Hawkeye, and if the subsequent shift results in 3 gems with the Black Widow symbol on them, she’ll follow with her own attack. Each character has their own health, which is represented above their heads, and the same goes for the enemies you face. So the last character you attack with is the character the enemy attacks with their moves, unless they utilize an attack that damages your entire group with the one in front getting the brunt of it. So the goal is to reduce your enemies’ health to zero before your characters’ health reaches zero. However the game play gets deeper than this. 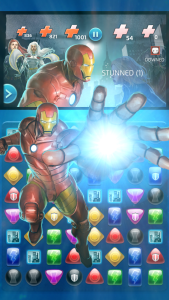 Every time you match gems they get added to your Action Points (AP). Action Points are basically the number of specific gems required to perform one of the character’s special moves. The total amount of destroyed gems is for the entire team so performing a special move reduces the total amount of AP available for another character’s special move. But not all character’s special moves use the same gems. For example, one of Black Widow’s special moves could require 9 blue gems and one of Iron Man’s special moves might require 9 red gems. So even though using Black Widow’s special move would reduce the total number of blue gems destroyed by 9, you’ll still be able to use Iron Man’s special move without any delay. When a special move is ready to be used, the corresponding gems of that particular color are lit up and when you tap on it you’re shown which special moves are available for use. When you use a special move there’s an animation for each one and they’re not only powerful and can truly change the tide of a battle but it’s a hell of a lot of fun to unleash. And since it’s rare that a special move uses your turn, you can just use one after the other, if you’ve collected enough AP, before the computer gets a turn. Some special moves give you a defensive bonus, some unleash a devastating attack, others stun your opponent for a number of turns, and many other benefits to your team. It’s an absolute joy and somewhat of a power trip when you see gems fall and match and the characters on your team switch to unleash their own attack matching the gems being destroyed. The RPG elements come into play because the special moves, your characters’ health, and the AP required are all dependent on your level and the abilities you train. 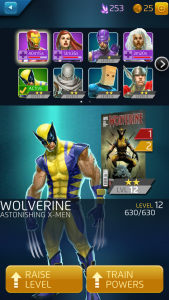 Now this is a part of the game I enjoyed but it’s also the part of the game I had a problem with. But the positives outweighed the negative by far. You can recruit different characters by acquiring their comic book covers in either one of three ways. You can acquire a recruitment token, which can be won through completing certain missions, purchasing a character with ISO-8 collected, or through the hero points you’ve acquired. You use the Iso-8 you collect through winning battles to raise the level of your character but there is a max level you can raise your character and that max level is dependent on the powers you’ve trained for that character. And you can only train new powers or raise the level of a trained power by acquiring a comic book cover of that same character and has that power you want to train. So in order to train Wolverine’s power in order to increase his max level you have to acquire another Wolverine comic book cover and use that cover to train the ability. The problem is you can’t purchase a specific cover for a character. You purchase a cover from a pack and it randomly selects one of the covers from that pack. But the number of covers/characters you can have at one time is dependent on the size of your collection, which you have to increase through hero points. You can acquire hero points by reaching a milestone or…yep, by purchasing them. So you may want to level up Wolverine but you keep acquiring Hawkeye covers. And a character like Hawkeye has a modern and a classic version but you can only use classic Hawkeye cover to train your classic Hawkeye character. So as you progress in the story you might end up using characters you don’t prefer but have no choice because they’re the only characters you can level up enough to match your opponent. However the game is generous with Iso-8, hero points and recruitment tokens as you progress and there’s a daily resupply of one of these items as well. Also, it’s good to play with different characters because their special abilities can help you with the various enemies you face. So you have to use strategy to succeed.

You face HAMMER soldiers, Maggia members and the Dark Avengers in multiple battles. When you face soldiers or Maggia members, they place countdown tiles on the board and you have to destroy these countdown tiles before they reach zero or else they’ll unleash an attack (or health boost). The different enemy types place different countdown tiles and since the results vary, you have to decide which one of the enemies to attack face. You switch between which enemy to attack by tapping on him or her, and then matching gems or unleashing your own special attacks. This is extremely fun, and you have to pay attention because if you miss one or two countdown tiles you can end up in dire straits. And as you progress the enemies get tougher and the battles get longer. But even when you get the hang of that you have to change up your strategy when fighting the Dark Avengers or any boss battle. The game play changes because you take turns matching the gems with the bosses you’re facing. Yeah you still have to match gems but you have to be careful not to set up the perfect move for the bosses you’re facing. And they acquire AP too and can unleash special moves. It gets pretty tough and you have to keep leveling up before entering into different battles but it’s extremely satisfying when you finally defeat that boss battle on the map you’ve been avoiding.

Marvel Puzzle Quest: Dark Reign is an extremely enjoyable and addictive tile matching puzzle game. The game play mechanics, which are variations on a tried and true formula, combined with RPG elements and  strategy make for a truly great experience that would make even Wolverine declare it’s the best at what it does. The story line is entertaining but it’s not the main draw here. And even when you complete the story there are enough special tournaments and features every couple of days to give you enough new battles to complete so you’re never repeating the same battles. And even if you do choose to do so, you can fight with different characters and in different ways to give you a unique experience each time. I HIGHLY recommend Marvel Puzzle Quest: Dark Reign if you even remotely enjoy tile matching puzzle games. 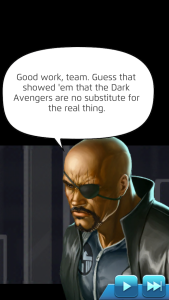