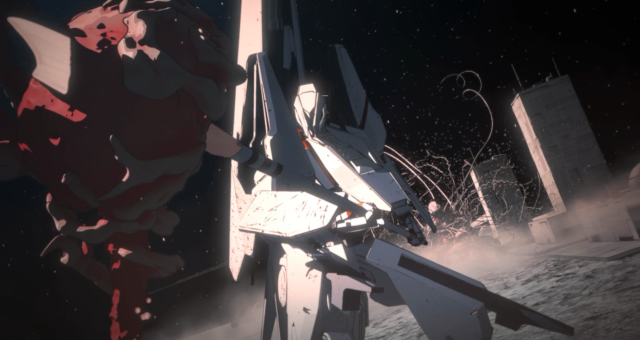 Knights of Sidonia is an exclusive anime on Netflix based on the manga of the same name, and set thousands of years in the future where the last of humanity is surviving on gigantic spaceships. This is due to Earth and the solar system being destroyed by massive aliens known as the Gauna, and even though the war has waged for longer than anyone can remember there hasn’t been a sighting in a 100 years. However for the survival of humanity to be ensured there are those who train constantly, and one such person, Nagate, is training in a simulator alone piloting a Garde, the mechs used to combat the Gauna. And he’s no rookie as he dodges all the Gaunas attacks almost effortlessly and proceeds to cut it in half, destroying it completely. Despite his skill piloting a Garde, he’s not immune to basic needs such as food, and considering he’s been living alone in the underworld since his grandfather died, he has no choice but to sneak into a factory to steal some rice. But things don’t go well and he ends up knocking himself out and getting captured. And for he first time in his life he discovers the world above the surface and how people are accustomed to living, and he’s as shocked as they are about him. Society is ruled by an immortal council and the citizens use photosynthesis to survive so they don’t have to eat often, protests rage in the streets wanting the council to end since a Gauna hasn’t been seen in 100 years. So it’s surprising to some that Nagate is offered a place among the knights and given a historical Garde by the captain of the Sidonia, however when a routine mission in space results in the knights encountering the first Gauna in 100 years nothing remains the same for the last of humanity.

I really enjoyed the opening sequence, and not just as a sci-fi action fan because the brief action was exciting, but the setup was perfect to introduce us to its world in the same way Nagate had to be introduced to it. So all he knew was the simulator and that was our first introduction, and then a series of events that would lead him to the world above ground. There are a ton of anime with mechs in them so I appreciated Knights of Sidonia turning its focus to establishing this world and giving a context early on to all that would take place. This was done in a very smooth way so it never felt as if I was being bombarded with a ton of details I had to memorize quickly, and the precarious situation faced by humanity was also made clear through the way society and technology adapted to the basic necessities. For example, humans photosynthesize not because it’s a cool thing to do but because they don’t have a planet and they require less food this way. So yes, it’s been a hundred years since the last Gauna was seen, and naturally some knights would take that duty relatively lightly while others would be upset about that but the tone was always mature and not jocular despite some humorous moments, such as Nagate believing he would be sent to an organic converter because he was injured. But there were some really intriguing aspects such as Nagate being chosen so quickly to be a knight, meaning there are those who know more about him than they’ve let on, suggesting a more complex origin. So there was more than enough in this episode to make me feel engrossed in the story, the characters, and the animation was visually pleasing as well. There wasn’t a ton of action this episode involving the Gardes yet what was at stake was made all too clear so the Gauna didn’t feel like generic monsters but an embodiment of the threat facing the last of humanity. So an overall entertaining first episode that captured my interest in the rest of the series.

After the startling re-emergence of a Gauna, the survey team is ill-equipped to deal with it, and they don’t even have the special weapons, Kabizashis, that can destroy the Gauna. After episode one’s exciting ending, the second episode jumps right into the action in a way that continues to build on the fact no one has seen a Gauna for a 100 years because it shows not just in the action but in the reactions of those back on the ship as well. And it’s immediately clear how terrifying the Gauna are and amid the cone-chilling screams is a cold silence from the Gauna as it devours its victim showing that neither motive nor origin matters. It works because at this point with everything that has to be established it’s not an absolute necessity that the Gauna’s origins have to be shown just yet. And the action is fantastic as the mystery deepens about Nagate when he shows off his very impressive skills and mastery of his Garde. And the fact that it’s not due to something that’s triggered beyond his control makes him an even better protagonist. This episode wouldn’t be all action as the second half would focus more on character development and the exploration of daily life on Sidonia. Nagate would be traumatized from his encounter with the Gauna and the flashbacks would interestingly hint at something deeper within his psyche. Some new characters would be introduced and they came off well for the most part with some standing out more than others but thankfully not a lot of archetypes, except the angry rival who views others as beneath him. More questions would be raised than answered and at this point would only make the story and characters more intriguing. A strong follow-up to the first episode.

Considering the fact that the details of the first encounter with a Gauna in 100 years was kept under wraps so others didn’t know exactly how that battle unfolded, it would make sense that the elite pilots would underestimate it since everyone not in the know viewed Nagate as a rookie. And if he could take on a Gauna and survive than the elites believed they could take it on and destroy it. They wouldn’t be arrogant as they would try to pick Nagate’s brain about the encounter to formulate a better strategy but he could only talk about it so much before passing out. What wouldn’t be as easily understood would be the focus on the Gravity Cup Festival, a dueling competition, when the Gauna have re-emerged and the first encounter would’ve been even more of a disaster if Nagate weren’t there. It’s not that such a tournament would have zero benefit but wouldn’t be the best way to prepare for the incoming Gauna and lessened the view of it as a threat. This would serve as an opportunity to have the characters interact with each other reinforcing their personalities and showing the dynamics of the different relationships. And once this episode moved passed the festival and focused on the elite pilots preparing to confront the Gauna things became a lot more intense and led to some shocking developments. And it was at the end of this episode where I felt more than ever that this would be a memorable anime.

After the first 3 episodes of Knights of Sidonia it’s definitely an anime I’m engrossed in for its futuristic setting, intriguing characters and back stories, and electrifying action that holds no punches. There is no explanation for the origins of the Gauna or their motives but they’re entertaining because they’re presented in the context of a grave threat to what’s left of humanity, and the society that rose from the original destruction of the solar system. And the mature tone coupled with characters who don’t fit the standard archetypes completely make the interactions relatively meaningful. And the action and surprising developments at the end of episode 3 has me hooked to this series, and the potential for it to be great is definitely there.