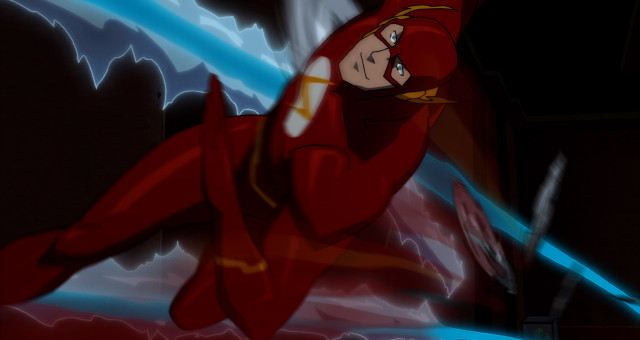 Justice League: Flashpoint Paradox is the latest DC Universe Animated Original movie and based loosely on the Flashpoint comic book crossover. It opens up with Barry Allen, the Flash, as a young kid with his mother trying to get help after their car broke down. After Barry is distraught that no one stops to help, his mother teaches him the Serenity Prayer regarding the wisdom of knowing the difference between the things that one can change and the things one can’t change. His understanding of that would soon be tested when he comes home one day from school and sees his murdered mother’s body, and blames himself for not getting home faster. This mentality stays with him even when he’s an adult and the Flash, as it tears at him on the anniversary of his mother’s murder. He doesn’t have much time to digest his wife’s reassurances, as there’s a break-in at the Flash Museum and he has to hurry there only to be confronted by the Rogues, who believe they finally have the upper hand on him with the help of Professor Zoom.  The Flash has friends too, and the Justice League makes light work of the Rogues and Professor Zoom, but not before Professor Zoom leaves an ominous message for the Flash: he can’t always run fast enough to protect those closest to him. To clear his mind of that message, the Flash does what he always does and that’s run as fast as he can. When he comes to, he’s at his desk at work and everything is different. Not only does he not have his super speed but other things are different, aside from his mother still being alive. Batman is the most popular superhero, there is no Flash, no Superman and oh yeah, Wonder Woman and Aquaman are warring with each other with millions of lives already lost as a result. And no one knows things are different except for the Flash, or rather Barry Allen. Is there any way for Barry to fix this or was this all somehow a part of Professor Zoom’s plan?

The way this movie started, even before the opening credits, made clear that it would have a darker tone similar to some of the latest DC Animated movies, even though it’s featuring the Flash, who would usually be portrayed as the jokester.  It’s also not a solo Flash movie as other members of the Justice League play important roles too. Well, technically there is no Justice League, and the Batman we all know and love isn’t Bruce Wayne, and he also has no problem using guns. This goes back to the quintessential point made at the start of the movie and was addressed by the Flash’s mother when he was a kid. How much is affected from one event changing, and if we understood the impact of changing past events would we want to go back and change them? I felt the movie did an excellent job of addressing that question as the story progressed and there was never the sense that characters were portrayed differently just for the hell of it. So Batman being different made sense, Cyborg being in the role he was in made sense and the war between Aquaman and Wonder Woman, as the root of it was explained, fit in line with their stubbornness and arrogance at times. The absence of Superman and all he stood for was factored into this, and even the understanding of how much his presence indirectly kept others in check.

The story line was solid but of course with all these super powered beings in one movie, and with some at odds with each other, there would have to be some entertaining action to accompany it. And there’s plenty of it and just about everyone gets in on the action including Grifter, Etrigan the Demon and Deathstroke. Even Lois Lane has good action sequences and they have nothing to do with Superman saving her. The heroes (including those who were villains in the regular timeline) have to stop Wonder Woman and Aquaman from basically destroying the entire planet after the death of hundreds of millions of people. So there’s a war between the Atlanteans and Amazons with the remaining superheros caught in between and fighting both. So the current alliances fit in perfectly with the story and the Flash wouldn’t be on the sidelines during this because he and Batman would attempt to give him his powers back by recreating the experiment that gave the Flash his powers in the first place. It felt good to see these intense and at times, graphic, action sequences taking place with no one holding back. Of course this couldn’t be good for the planet.  And not to give any details that could be considered spoilers, although you pretty much have a general idea if you’ve read the comic book series despite some character changes, the ending is as satisfying as one would hope for while watching this movie.

All DC Animated Movies tend to be the same length and although I’m sure there are many reasons for that, sometimes it feels as if there could be some additional minutes to elaborate on some of the finer aspects of the story line so it feels like a fuller experience. It doesn’t take away from this being a great movie but I think it would give more for viewers to come back to for repeated viewing.

Justice League: Flashpoint Paradox was a very entertaining movie and one I highly recommend for all fans of DC’s animated movies. I wasn’t entirely sure what to expect with some of the previous portrayals of the Flash in the Justice League series and movies but he was more developed in this one and held his own as the featured character. The story was great and unfolded perfectly while addressing the quintessential point raised in the beginning, as well as provided great enjoyment from seeing the various characters in action and fighting with their all. The different portrayals of the characters didn’t feel one-dimensional and felt fully fleshed out. And there was a touching moment in the ending that at this particular time had even more meaning to me on a personal level. And as is the current trend with most superhero movies, there’s even a glimpse afterward of what’s to come as the result of events that occurred in this movie. This is definitely one you don’t want to miss.