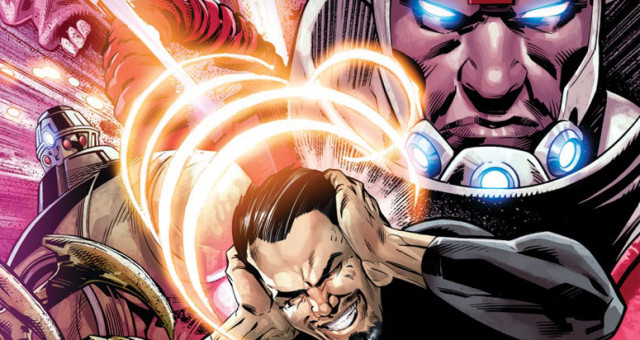 Imperium #8 has Harada face to face with Divinity as he tries to convince the cosmic being to join his cause. Harada believes he’s finally figured out Divinity’s powers and how to defeat him, and he asks Divinity to give him a chance to talk first. Unconvinced that Harada has anything to offer him, Divinity states that it’s best Harada leaves him alone and he’s not a puzzle to solve or something to be conquered. But Harada takes the opportunity to assault Divinity’s brain overloading his memories and using the holograms of Divinity’s wife and daughter in an attempt to control him. Divinity realizes what Harada attempted to do, and it only angers him further as he propels Harada through time again with his mastery over reality. This time Harada is back to before his powers reactivated on the Leviathan, and even though he knows what’s going to happen next he’s unable to change it and everything plays out the same with him blowing a hole in the submarine. Harada understands that he underestimated Divinity but still believes Divinity can help him achieve his dream to  make the world a better place. Can Harada convince Divinity to help him or is this a battle that Harada can’t win? 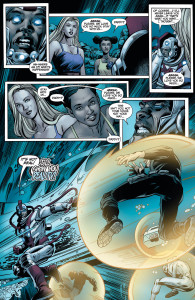 Divinity vs. Harada: Round 2. One thing I’ve appreciated about this interaction was the fact that it wasn’t just a simple slugfest and actually utilized the characters’ powers in an intriguing way complete with thought-provoking scenarios. So I’ve enjoyed the extra pages given to Divinity, one of my favorite characters, since his series concluded a few months ago. And the tone of these issues have been consistent with the overall series with the way Harada isn’t portrayed as a simple black and white character but in his own mind a necessary evil with a noble goal. And that belief is what shaped the events in this issue as Harada would have no choice but to appeal to Divinity after realizing he couldn’t match his power. This issue did have time jumps like last issue but gave some more insight into Divinity’s powers and there was a lot of story progression in terms of finding a resolution to the current situation. Divinity’s experience with ideologists made him the perfect character to have these discussions with Harada and not just a random guest appearance, and I enjoyed this exchange thoroughly. And just like last issue, this one used this exchanged in a metaphorical way but made it much clearer this time around.

There was character development for the other members of Harada’s team, and, after a number of issues, the Foundation Zone was finally shown again. This allowed the events from the past few issues to be put into the proper context while also enhancing them. So this issue had a bit of everything and I liked the way the aftermath of the assault on the Leviathan unfolded while maintaining the character development from the previous issues. The only thing that was slightly weak was the action at times because it had to show again the fighting that was already detailed in the previous issues but everything new was outstanding. And with this series being tied into the upcoming Vine Imperative story line, I can’t wait to see what’s up next. 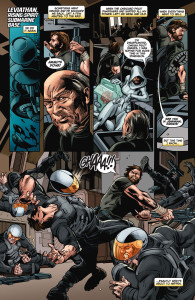 Imperium #8 is a satisfying conclusion to the current story arc and Harada vs. Divinity. It gives more insight into Harada’s mindset and how he truly views his actions compared to others, and also makes me anticipate the return of Divinity even more. And since the Foundation Zone is finally shown again the new characters’ roles in it are starting to take shape, and returns the series to its engrossing roots. I don’t know how the Vine Imperative will affect upcoming events in this series but after this story arc I can’t wait to see it.