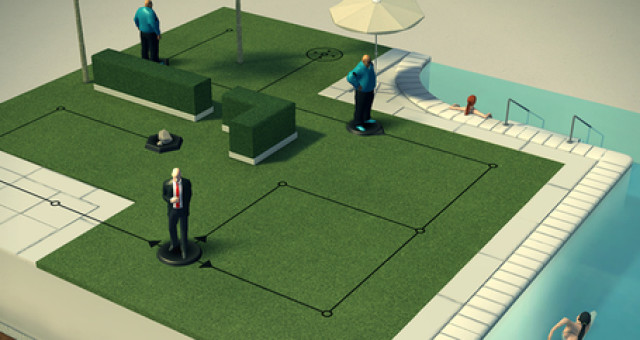 Hitman Go is one of a few mobile games Square Enix has put out to accompany its hit console gaming series. While the Hitman games traditionally involve mission-based assassinations accomplished through stealth and skill, Hitman Go focuses almost entirely on the stealth aspect. This is a puzzle-style version of the Hitman games in which your task is to move along a grid avoiding the attention of guards and reaching your various targets.

If you’re looking for a mobile experience to directly mirror the Hitman games you may have played on a console, Hitman Go is not the app for you. Though its image and core subject matter will be immediately familiar to fans of the franchise, the actual gaming experience in the app is vastly different from any stealth or action console game. However, this actually isn’t the first time that Square Enix has ventured off the beaten path with a Hitman adaptation.

The most notable previous example is Hitman: Sniper, which was essentially a point-and-click sniper game built on the Hitman model (and admittedly better than many other similar mobile games). But perhaps the online slot game based on Hitman is a more appropriate example of how this franchise has branched out into some unexpected types of entertainment. Gambling.com characterizes the slot game as one that brings Agent 47 to the reels, with symbols representing the famous video game assassin and the tools of his trade. There’s a bonus in which you choose a weapon and eliminate a target, but primarily it’s a slot machine.

Hitman Go is neither sniper game nor slot machine, but like those examples it does stray from the basic format of a Hitman game we’ve come to expect. It can best be described as a puzzle in which each new level presents Agent 47 as a chessboard-like character (think rook, because you move laterally) faced with a path to objectives like briefcases to collect and, ultimately, targets to take down. Each time you move from one spot to the next, however, other characters move as well. And if you end up one spot away from an enemy who’s facing your direction, you’re toast. The task, then, is to recognize the patterns of your enemies and either avoid them or take them down (by coming at them from the side or behind) en route to fulfilling your mission.

There are additional wrinkles thrown in, such as trapdoors that move you across the level to a new starting point, but basically this is the game. And while the first level or two seem simple and frankly a little dull, the progressively increasing difficulty and complexity actually make it a pretty entertaining puzzler to play through. Additionally, it should be noted, the graphics are sharp in their own way, and the few sound effects are there to help make you feel like you’re actually working with some kind of functioning mechanical game board.

As fun as the game is, however, in its own way, it’s also a little bit slight. There’s virtually no sound other than the aforementioned board sound effects,
and the animations when you take down an enemy are meant to look like chess pieces knocking one another off a board. Because of these things and some generally bland level designs, the atmosphere of the game doesn’t give you a whole lot, despite the decent graphics.

Whether or not you’re a fan of the Hitman series, this is a fun and very different addition. It’s unlike many other app games you’ll play, and there’s a lot of satisfaction to be had in solving the puzzles and figuring out the game as a whole. But if you’re looking for a compelling spy saga or any sort of action attached to the basic puzzle experience, you may be disappointed. The atmosphere is lacking and there’s no sense of story to why you’re taking down targets (even if some of the levels are pulled specifically from previous Hitman games). In other words it’s worth playing, but only if you’re in it for the puzzles.