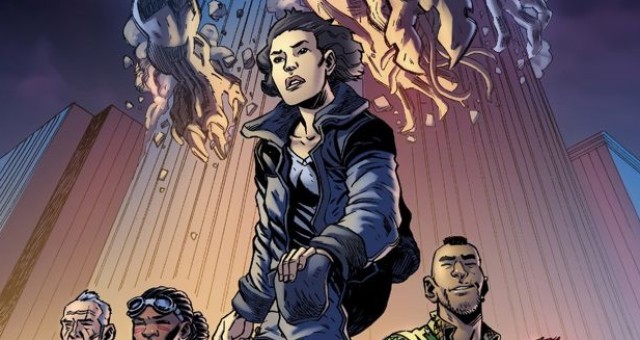 Gunsuits #2 continues the multidimensional battle between humanity and unstoppable monsters bent on destroying life everywhere. It opens up with Potts explaining to an alternate version of herself how the monster the latter just killed is just an early form of an even more terrifying army. And the news gets worse when Potts tells her that they both can’t truly exist in the same dimension because eventually one of them will be killed or just fade out of existence. However, it’s not all bad news as the alternate Potts, known as Potters Field, introduces Potts to her team of bio-mech soldiers known as the Tombstones. In her world, she’s the only soldier left so it gives her even slight hope that this dimension might be the start to turning the tide of the war. In this dimension all isn’t lost yet, and the battle hardened Potts might view things differently from her new team in terms of protecting humanity against this threat. But what do these monsters want and how have they been able to traverse through different dimensions destroying everything in their path?

The first issue was highly entertaining with its premise, great action and enjoyable characters. The story was intriguing and edgy, and the revelation at the end that the monsters were actually humans from another dimension had me excited to get my hands on the second issue. And it had just a fascinating ending and I needed to know more. This issue picked up right where the last one ended, and the interdimensional monsters became more frightening with the suggestion that they actually emit some kind of aura that affects those in the vicinity attempting to attack them. And answers were given readily regarding it being possible for 2 Potts to be in the same dimension simultaneously. And keeping with the tone of the first issue, the answer was as real as it gets. And I enjoyed the way the differences in the dimensions were played up and not just in terms of the difference in monsters but the team members surrounding the Potts from this dimension.  And it wasn’t difficult to follow. The character development was interesting and I liked the members of the team overall. The explanation for the monsters’ origins was good but I would’ve liked to see more in terms of the end game of these twisted humans. Even genocidal maniacs have some twisted rationale for their actions. And even though they’re referred to facetiously as cavemen, their technological advances have seemed to be superior to other dimensions. So it would’ve helped to give a face to these enemies, so-to-speak. There would be more action this issue, of course, and it was intense. This was pretty good but there was one below the belt moment that took away from the entire situation because at best it felt comical and at worst it just felt absurd and unnecessary. But all in all, I have a great feeling about this series and all the potential that lies ahead. The conclusion of this one almost guarantees that the next one will be exciting.

Gunsuits #2 is a solid issue that builds on the intriguing character dynamics while delivering interesting answers regarding the multidimensional invasion. It’s refreshing how Paul Tobin utilized the different dimensions to give life to the characters on the team with the alternate Potts. Despite one comical addition to them, the monsters are overall more frightening this issue since more is revealed so hopefully next issue capitalizes on that. But I’m glad I gave this series a try and I’m looking forward to the next one.