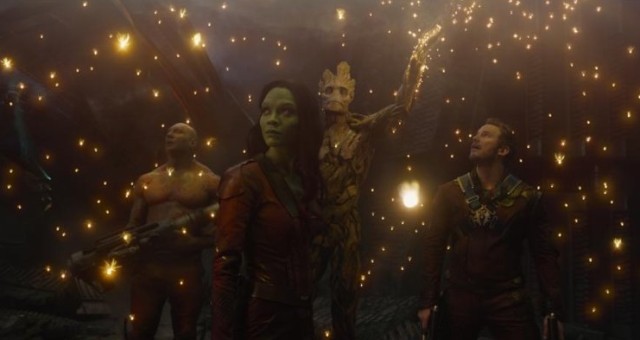 Guardians of the Galaxy

Guardians of the Galaxy is a superhero movie produced by Marvel Studios based on the cosmic team in the comic books of the same name. It opens up on Earth with a young Peter Quill sitting in the principal’s office listening to his walkman after getting into a fight. His grandfather comes to pick him up and take him to see his mother, who is in the hospital in her final stages of terminal cancer. She asks him what happened before giving him one last present, and before she can finish telling her story about his father, which is attributed to delusions, she passes away. In his distressed state he runs out of the hospital into the field, and while he’s there crying a spaceship arrives and abducts him. 20 years later Peter has become a Ravager, a space pirate, and his latest job is to acquire an obscure orb, which he does, but he encounters a group working for Ronan, a Kree who is labeled a terrorist throughout the galaxy. He’s able to escape from them with the orb but when his buyer learns that Ronan is after it too, he wants no part of it and won’t even tell Peter what it is. However, Ronan sends the assassin Gamora after him, and that’s not all Peter has to worry about because a bounty has been placed on his head by the Ravagers for not bringing the orb back to them, so now others are hunting him too. Can he discover the true nature of this coveted orb before it falls into the wrong hands or does he even care if it nets him a huge profit? 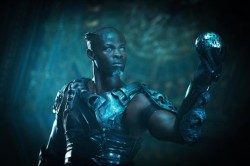 I was looking forward to this movie a lot, and not because of the commercials and trailers, which I felt did a disservice, but because of all I knew about the Guardians of the Galaxy and what Marvel’s foray into its cosmic universe meant for the Marvel cinematic universe. And I admit, I wanted to see Thanos beat someone up, and I was hoping that would happen at some point, however I do love the way Marvel has been treating him and building him up. And my expectations were through the roof after hearing this was Marvel’s greatest movie to date. And the opening scene with a young Peter Quill was very touching, although some dirt in the theater got in my eye affecting my ability to see clearly. This entire sequence was huge in Peter Quill’s character development, and I loved the way this was handled. So when this scene was followed by his humorous arrival on a desolate planet, the tone was already set and this was just building on the core of his character. He wasn’t a standard hero at this time and he was only retrieving the orb as part of a job until he learned how coveted it was. And a great job was done in bringing together the unique characters who would form this team as Gamorra was the first one sent to capture him but she planned on retrieving the orb for her own reason. Rocket and Groot would be on the same planet Peter, um, Star Lord would attempt to sell the orb and would attempt to capture him because they could see the bounty on his head. And this would be a very humorous but well-choreographed scene with the 4 of them trying to stop each other and/or acquire the orb. They would end up being captured by the Nova Corps and thrown into prison where they would eventually encounter the 5th member of their group, Drax the Destroyer. 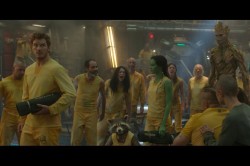 It becomes apparent early on that Guardians is much different from many of the superhero movies that have taken a darker tone over the years, as the humor works extremely well with legitimate laugh out loud moments. However I stated that I felt the commercials did a disservice because aspects of it looked very silly but an amazing job was done in the movie in making it humorous so you could have a good time while watching it without making its subject matter the object of ridicule. This works in so many ways it couldn’t work for other movies because of the unique characters, their various backgrounds, and of course, great acting and writing. So for example, Star Lord, a human abducted from Earth as a child is retro without even knowing yet to Gamorra everything he says would be new. This would lead to some hilarious references that the team would eventually adopt. Rocket is a genetically modified raccoon with cybernetic implants yet he doesn’t know what a Raccoon is, and his partner, who is powerful and has many abilities, only says “I am Groot.” And when Drax, who is set on revenge against Ronan for killing his family, is added to the mix, his lack of understanding of metaphors (and social skills), makes the team even more entertaining. Yet there’s always the sense that there is something deeper in all the characters despite what they try to portray themselves as, and this makes them very endearing characters, even if they don’t initially join forces for a noble cause. Also, since Marvel hasn’t delved into its cosmic universe deeply prior to this movie it all feels completely fresh, and yes there are some changes to characters. And Guardians indeed delves into the cosmic universe unapologetically, and if you’re familiar with the names of alien races, corps and characters, you’ll love all the names being thrown back and forth as if they’re very common. 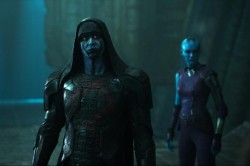 So the Kree are mentioned and it’s explained that Ronan the Accuser, is a Kree who is upset with the treaty between his people and the Xandarians, and wants them destroyed. So he reaches out to Thanos, who is well-known in the galaxy, and makes a deal where Thanos will destroy Xandar if he acquires the orb for him. And Thanos’ daughter, Nebula, would help him succeed in acquiring the orb, and to say Thanos has some family issues is an understatement. The Kree won’t lift a finger to go after Ronan and they tell the Xandarians that he’s their problem so he has the free reign to do what he wants. Ronan was played very well by Lee Pace, and an excellent job was done by Karen Gillan as Nebula. So the introduction to galactic politics does indeed open up the Marvel cinematic universe so Guardians doesn’t feel like any other movie. Even the action is on a galactic level as fights range from hand-to-hand combat to large-scale dogfights, so there’s plenty of action throughout this movie, and so I understand some of the comparisons I saw to Star Wars, and to that I’ll say this franchise clearly has that potential. Guardians is an extremely enjoyable ride that will have you completely engrossed, if not for the characters then due to understanding what is at stake once the truth of the orb is revealed. But is Guardians the best Marvel movie to date? Obviously that’s a matter of preference, and I can understand how some can feel that way. Considering each member of the team didn’t have their own movie to give their backstory, an excellent job was done in bringing them together. Although maybe I’m in the minority in believing that showing events from a character’s past can be more effective on occasion than just having the character talk about it. So we only hear Drax talk about his family being killed, and the same for Gamora, when it would have elevated not only their characters but the villains as well if at least one of those situations was shown. 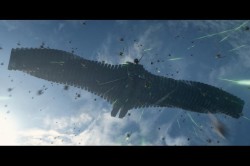 So I love Guardians and it’s easily the best introductory movie to new characters but the villains, outside of Thanos, don’t reach the level of Loki or the Winter Soldier, and not in terms of being menacing but what we can actually see them do that’s as memorable as villains. However it is the funniest Marvel movie to date, and that’s not something that should be a turn off because it is actually quite serious. I can understand the difficulty in making a cosmic movie reach that “realistic” threshold for superhero movies, which sometimes just means dark but just because something is darker it doesn’t necessarily mean it’s entertaining. And I find it ironic at times how the push can be to make things more realistic but all the characters ideal in such a way that they’re completely unrealistic and where a hint of a unique personality is deemed offensive. Peter Quill’s initial personality fit the life he had and the same for Rocket, who had a tendency to play practical jokes, Gamorra, Drax and I guess Groot as well. Even their humor or practical jokes could be viewed as covering up for pain in their lives. Peter was a womanizer however he lost his mother as a child. Rocket played cybernetic jokes but was experimented on in cybernetic ways during his creation. So the “realism” of their characters could be understood just as easily as Steve Rogers’ personality could be understood. And it was their growth to finally stand for something bigger than just themselves and overcome together what held them back in their lives is what finally made them heroes. So excuse me while I go make my Awesome Mix tape because now I’m hooked to this franchise. 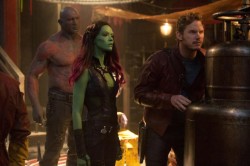 Guardians of the Galaxy is one of Marvel’s best movies to date, my personal top 3, as the unique characters and engrossing story will have you laughing, getting dust out of your eyes, and cheering as they fight against all obstacles as a team against an unprecedented threat. The introduction to Marvel’s cosmic universe shows it’s been worth the wait, and fans will be giddy at how much is mentioned as a matter of fact, and newcomers will appreciate the manner in which it’s handled because the same way the cultural references don’t make sense to each other initially, the understanding grows and it all comes together in a marvelous climax. Guardians is crucial to understanding the events that have been unfolding behind the scenes, if you don’t already know, but either way it’s extremely entertaining and I highly recommend it.