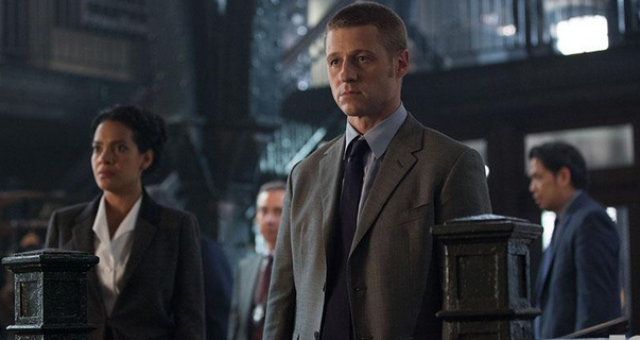 Gotham: Penguin’s Umbrella is the 7th episode of the season and all hell breaks loose now that it’s known that Gordon didn’t kill Cobblepot and the latter is back in Gotham. It opens up with just about everyone in the police station shocked when they see Cobblepot walking up declaring he’s back, especially considering Gordon was just put in handcuffs. Shock isn’t the only reaction that Gordon has to worry about as Fish learns of this too, presumably through a contact in the GCPD, and she calls for Gordon’s head. Even Bullock is angry with Gordon and when they’re both alone he knocks Gordon down and draws his gun on him. Despite Gordon assuring him that he has a plan so they both don’t end up dead, Bullock still attempts to kill him until Gordon takes him down and gains the upper hand. Everything is falling apart very swiftly for Gordon, who now can’t get in touch with Barbara and so he rushes to their apartment but he’s too late. Two of Fish’s goons are already there holding Barbara hostage and Gordon comes in with his gun already drawn. Barbara finally knows the truth about Gordon not killing Cobblepot but obviously this isn’t an ideal situation. And ultimately Gordon doesn’t have a choice but to knock one of them out and shoot the other so they could escape. But Gordon knows it’s far from over as he takes Barbara to the train station so she could leave town in hopes of her being safe while he executes his plan. However he doesn’t tell her that there’s not much hope for his plan to succeed with him coming out of it alive since practically the entire city will be hunting for him. Is this it for Gordon or will he find allies in time to turn the tide?

The best part about last week’s episode was that fact that the Cobblepot murder mystery story line was coming to an end, and I could at least look forward to this episode getting past it completely. So despite hating the almost comical way this story line has been handled up to this point, I put that aside and attempted to feel engrossed in the start of this episode. And I really liked the way that Gordon handled Fish’s two goons in his home especially considering how Bullock turned on him, and the situation was dire. And I was intrigued by this plan he kept stating he had in the face of everything occurring. And nothing was as chilling as when Gordon walked into the police station and how everyone looked at him knowing he crossed Fish and Falcone by not killing Cobblepot. It highlighted how deep the corruption went in the department because everyone feared for Gordon’s life. Even Captain Essen was worried about Gordon and stated just as much. All of this added well to the tension throughout this episode, and the only one who was considerably more relaxed than everyone else besides Cobblepot was Falcone. Fish would notice this and discuss with Nico what it could mean. Falcone wanted to know why Fish would basically start a war for someone like Cobblepot but she informs him that it’s not his level but all the secrets that he knows. Ultimately Falcone decides to send Victor Zsasz, YES, that Victor Zsasz, to get Gordon from the police station, and Fish would go talk to Marrone about harboring a “snitch.”

One thing this episode would improve on greatly from last week was the action. It started off with Gordon in his home but the later scene in the police station where Gordon faces off with Zsasz and his 2 henchwomen was easily the best action scene so far this season, and the boldest. And I can’t see a shootout taking place in the police station right after every single officer walks out leaving Gordon all alone not having repercussions. Captain Essen would initially want to stay but Gordon wouldn’t let her considering everyone else walked out. So I’m curious as to what kind of repercussions this will have, whether good or bad. Gordon would eventually gain allies but he would still go ahead with his initial plan to fight back against those part of this corruption as a last resort effort. It was entertaining watching this unfold and there were glimpses of a future Commissioner Gordon in these scenes but I couldn’t help but chuckle at the special unit helping him considering they’re the ones who got him into this mess. And Fish would finally have more interesting things to do as the war between Falcone and Marrone would heat up with Marrone finally showing some of his hand. The build up the past few episodes for this to take place would be worth it. So there was plenty of action all over this episode.

However the story would be great too, and with some memorable scenes. Gordon’s exchange with Captain Essen about corruption in law enforcement would be excellent. And Cobblepot’s scene in the second half of this episode when he would tell another character what drives that character would be awesome, and show why he’s been the most fascinating character in this series. And there would be another twist revealed and thinking about what this means going forward has me excited. This episode was a drastic improvement from last week with the way it treated its events, and despite shaking my head when Gordon would tell Bruce and Alfred that he trusts the special unit to continue his investigation into the murder of Bruce’s parents since they didn’t even check to see if Cobblepot was still alive, those moments would be minor compared to the overall episode. And I’m still not too keen on Barbara at the moment. But it feels like Gotham is back on track and I’m happy about that.

Gotham: Penguin’s Umbrella was an action-packed episode that put the series back on track with its surprising story and great character development. Gordon’s shootout with Zsasz was intense and shocking with everyone leaving the station and most likely changes the dynamics going forward. Falcone was finally an impressive character and I was glad to see Fish doing more than being a judge for auditions. But Cobblepot would steal the spotlight with his memorable scene as well as his role in all the events that took place. So I’m excited to see what stories are ahead now that the Cobblepot murder mystery story line has been resolved.