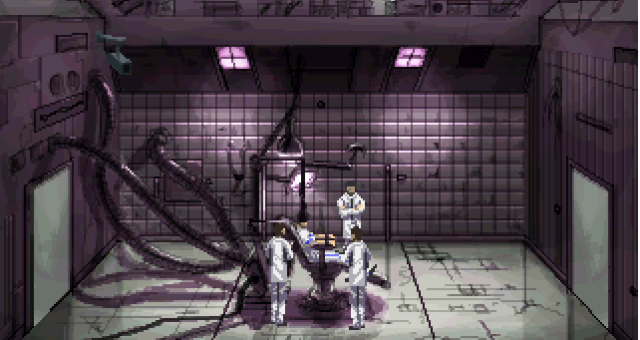 Gemini Rue is a futuristic sci-fi point and click adventure game developed by Joshua Nuernberger and published by Wadjet Eye games. It’s the story of a cop, Azriel Odin, who is from outside the Gemini system as he seeks to unravel the mystery behind his missing brother. People have gone missing in Gemini for months now and no one seems to know why. Fortunately, Azriel has a contact named Matthias Howard, an old friend who can help, and they arrange a meeting to share information and try to get to the bottom of what’s going on. However Matthias never shows up and now Azriel has to navigate a city he is completely unfamiliar with to find out what happened to his missing friend. If that wasn’t bad enough it’s a city filled with corruption and terrorized by an organization known as the Boryokudan, which uses a drug called juice to finance its operation. It’s up to you to solve the mystery behind these kidnappings as you become engrossed in a story of corruption, betrayal, friendship and the meaning of second chances in life.

Gemini Rue opens up with a scene in an operating room in an unknown location with a patient strapped in a chair. Apparently the scientists are trying to do a memory wipe of this patient, referred to as Delta 6, for trying to escape and this scene is very intriguing. It let me know 2 things about this game right off the bat. First thing was it would deal with its sci-fi elements in a mature way and the second thing was that this game would be ugly…graphically (aside from when someone is talking). Fortunately, I played my fair share of games back in the day where graphically this was the standard so I could overlook this for the purpose of this game. And I’m mentioning this to strongly implore you to bear with the graphics as well or else you’ll miss out on a very entertaining game and gripping story. 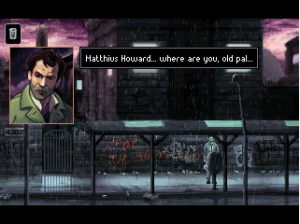 I would compare it to a great book that has a raggedy cover. Or even a delicious meal but the presentation on the plate is lacking (not one they serve in a rehabilitation center after wiping your memory). Beneath the rough exterior there’s entertaining gameplay. The controls are relatively simple but has some interesting additions. The left mouse click is to move to a location and the right mouse click opens up an action and inventory window. There are 4 actions to select from: eye, hand, mouth and foot. The eye icon is to look at something as well as use your eye for something such as a scanner. The hand is to interact with an object using your hands and even allows you to use a person you’re with on an object. For example, if you want someone to move a bookshelf you would select that person using the hand and then the bookshelf. The mouth is to initiate a conversation with someone. And the foot is to either kick something or step on something such as a box or railing. If you double-click with the left mouse button it’ll use the last action you selected. Left clicking on an item in the inventory selects that item and right clicking on it gives a description of it or allows you to inspect it. When your cursor scrolls over an item you can select it changes to let you know you can interact with it. I was impressed with the different action options because it led to some interesting puzzles or sequences but I would have preferred the ability to view my inventory without first finding something on the screen to interact with and then right clicking. 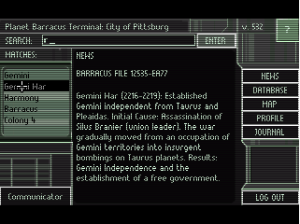 There’s also an icon for your communicator, which is very important in advancing the story. It’s basically a smart phone that you use to make phone calls and important notes are automatically stored in it. There are terminals throughout the city you can use when you have an ID to search for information about events and people. And while viewing the terminal screen there’s a button for your communicator and you can click and drag items from it into the search bar. It’s a great touch and this is also a way to get more backstory about the characters and the system. Basically there was a war that took place in the Gemini system and resulted in the Gemini system gaining its independence. However the government has struggled since the end of the war, including financially, and the rampant corruption has only made matters worse. There are rumors of a rehabilitation center that was used to turn criminals into upright citizens secretly reopening but being used in a more devious way. You don’t just read about this through the terminal or from interacting with other characters. The game re-introduces Delta 6 as a playable character in this rehabilitation center.  And you can switch between Azriel and Delta 6 at any time and follow each of their stories to a specific point. This was quite enjoyable as it expanded the game and story, introduced new characters and allowed for unique puzzles to solve. It also allowed for an extensive tutorial of the combat in this game while keeping it as part of the story since Delta 6 had his memory wiped clean and would have to relearn certain things, such as how to use a firearm.

The combat isn’t complicated but even if you find it difficult, Gemini Rue allows you to adjust the difficulty setting for combat. The combat system in this game is based on cover and timing. You’re automatically placed behind cover as you face off with one or two enemies at a time. You have to time your shots just right, which means you have to shoot at the enemies as soon as they leave their cover. The catch is you can only fire when you exit cover, either to the left or right, and you don’t have an unlimited amount of ammo. 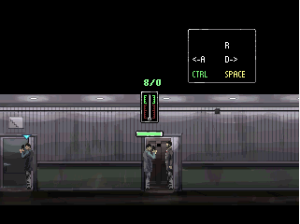 If you’re facing off against two enemies you have to also choose which side to exit cover in order to not be hit. This is all done through the use of the W, A, S, D, R and Space bar keys. And there’s a meter you have to activate using the CTRL key in order to achieve a headshot as opposed to firing randomly. The combat never felt gimmicky and was very responsive. It added a new angle to the gameplay and it worked in creating a sense of danger in the game. If you run out of ammo, which I admit I did the first time I was in combat, you’ll just have to get yourself killed because the game doesn’t automatically end, even though there’s nothing else you can do at that point.

The game play mechanics and puzzles were enjoyable but the story was the strongest point for me. This game poses a very interesting ethical question regarding the use of technology and free will. Are our personalities shaped by nothing but our experiences and memories or is there something more that is responsible for our identities? And in light of the recent experiments where scientists where able to manipulate memories in mice, virtually creating false memories, the question this game poses becomes even more interesting. The story was very gripping and well-executed. And the ending was as satisfying as sitting on a beach without a care in the world because you can’t remember anything. Well, the analogy works better after completing the game so let’s just say it was a very good ending.

Gemini Rue is a very entertaining sci-fi adventure and what it lacks in graphical presentation it makes up for it with its story and game play mechanics. The various characters come together in an engrossing way to unravel the tapestry woven from the very beginning of the game. If you’re a fan of Indie games or interesting sci-fi stories I highly recommend Gemini Rue. The graphics don’t rate high but the game play definitely does. You won’t be disappointed.