Gabriel Knight Sins of the Fathers: 20th Anniversary Edition is the remake of the classic adventure game featuring a writer/bookstore owner who discovers his family’s supernatural legacy while investigating the so-called Voodoo murders. It’s set in New Orleans and opens up with Gabriel waking up from a recurring nightmare that he can’t understand in which a woman transforms into a beast in front of his eyes. However, nothing in Gabriel’s daily life even remotely resembles this as his daily routine which usually consists of reading the newspaper or working with his assistant Grace, who tends to have a better understanding of the bookstore’s finances and operations than he does. He does have plans to change his situation, and for that he uses his connection with the police department, his childhood friend Detective Mosley, to get inside information about a string of murders to write his book. There have been gruesome murders with signs of a Voodoo ritual being performed in front of spectators but there are mysteriously no leads. And the latest crime scene, which Gabriel is able to find while Mosley is still there, is just as perplexing as the others with numerous unexplained phenomena. To Gabriel, visiting the crime scene is more than worth it as he catches the eye of Malia Gedde, a rich socialite, who happens to pass by on the way back home. Even though it’s a brief exchange he’s enraptured by her beauty despite getting a strong sense of danger. Gabriel decides that he wants to do his own investigation of these murders and also use it as a way to get closer to Malia. However what he starts to discover changes his life and the landscape of New Orleans forever.

After I played the preview I had high hopes for this game, and seeing how the controls were fine-tuned from that point to the final build I felt even better about it at the start. It’s always good to know the developer takes pride in improving a product, and not just using the name of a classic. The controls were smooth and responsive, and gave plenty of options to interact with characters and items. The left mouse button controls everything from Gabriel walking from one point to another as well as all the interactions with the world. If you want Gabriel to walk somewhere just click on the spot, and if you don’t have patience to watch him walk just double-click and he’ll appear there instantly. (Benefits of being a Schattenjager). When you click on an object or a person a menu pops up giving you 5 icons: Talk, Hand, Operate, Open and Eye, plus an empty slot to keep an inventory item for use. The options are contextual at times but in terms of solving puzzles  it could add an additional layer of complexity in order to figure out HOW to interact with an object or person. I actually appreciated this because it felt more engrossing at times, and even just hearing the narrator’s comments (or Gabriel’s) was often worth the extra click. The inventory slot was vital, and so it was good the inventory system worked smoothly. The inventory was accessed via a bag icon, which would open up a separate menu showing everything in your possession. The 3 options were to look at an item, examine an item more closely or combine an item with another item in your inventory. I admit there were times when I would just click on various items in attempts to combine them when I got stuck on a puzzle but there were only a few times it would feel cumbersome to reopen the inventory when the choice didn’t pan out. 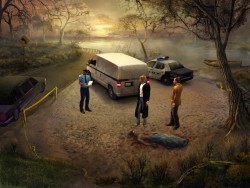 Despite Gabriel Knight’s great graphics which stand out for its photo realistic scenes and interesting mechanics, the all point-and-click adventures are only as good as their puzzles and story. Thankfully the puzzles are enjoyably diverse and fit wonderfully into an engrossingly rich story that also rewards those who want to delve into its topics in depth. Of course there are puzzles that require inventory manipulation or just talking to the right person to advance the story line but there are many puzzles that require ingenuity and still fit into the context of the “real world.” Whether it’s making use of an annoying mime to distract someone or finding a clever way to compare evidence gathered from different locations, every solution feels fresh and exciting. There are times when you’ll have to travel back and forth between locations to solve one puzzle or figure out where you should go next but thankfully the ability to travel from one place to the next is just as easy as clicking on the map in the lower right hand corner. Plus the motorcycle engine revving up is always a sweet sound. So I really appreciated how problem solving was just a matter of paying attention and being able to put yourself into Gabriel’s shoes to determine what needs to be done next. There was only one puzzle, a clock puzzle, that truly felt random and almost impossible to solve without just guessing but that was later in the game. But there’s also an easy to use in-game hint system if you ever truly become stuck.

And the puzzles never feel tedious because the story is incredible, and that’s the true strength of Gabriel Knight Sins of the Fathers: 20th Anniversary Edition. It starts off in the French Quarter with Gabriel starting out as a bookstore owner with his assistant, Grace, and some ambition as a writer, although his ambition to pursue beautiful ladies is even stronger. However, his quest to uncover the truth behind the Voodoo murders puts him on the path to not only develop as a character but give one of the most entertaining lessons on Voodoo and Hoodoo. Driving this story are the many characters (with terrific voice acting) who fit together wonderfully in the tapestry woven by Jane Jensen. Even the wise-cracking detective comes off as more than just a cliche. What starts off as trying to solve disturbing murders evolves into a wide ranging conspiracy that runs deep into the history of New Orleans tracing its roots back to Africa. There are many dialog options for every conversation, and some of the options advance the story while others can give you a breathtaking amount of information if wanted. The story never feels monotonous and there are many genuine frights that last even after leaving the immediate scenario because it’s not solely based on temporary scares but an overwhelming situation. Every twist and revelation makes the story even more tantalizing. And as a result, Gabriel’s quest to understand what a Schattenjager is and become one felt like a necessary and natural progression. 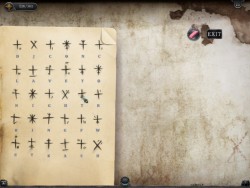 I admit there was some nostalgia while I was playing that added slightly to my enjoyment, however, even without that nostalgia this is still a highly entertaining and engrossing game. There are only a few things that feel like a throwback, and that’s mainly related to Gabriel’s mannerisms at first but I was surprised at how well it held up overall. And whether you played the original or not, you should get a kick out of the feature comparing the original scene with the current updated scene. Aside from just graphics there are notes detailing the differences including some history about the making of the scene. So even after finishing the game there’s still value in going back to different points and just comparing the two in order to enjoy a little bit more of this fascinating world. 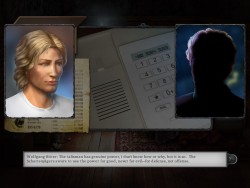 Gabriel Knight Sins of the Fathers: 20th Anniversary Edition is a wildly entertaining game that not only successfully captures the allure of the original classic but is still an engrossing tale about one rising to accept his destiny. An excellent job is done by Jane Jensen in building up the story, its characters and the world they inhabit through intriguing mysteries, enjoyable puzzles and great setpieces. As one who played the original, there are so many aspects to enjoy about this edition and it truly felt fresh even by today’s standards. The original Gabriel Knight was one of the games that got me hooked to adventure games and I suspect this edition will do the same for another generation. I STRONGLY recommend it.