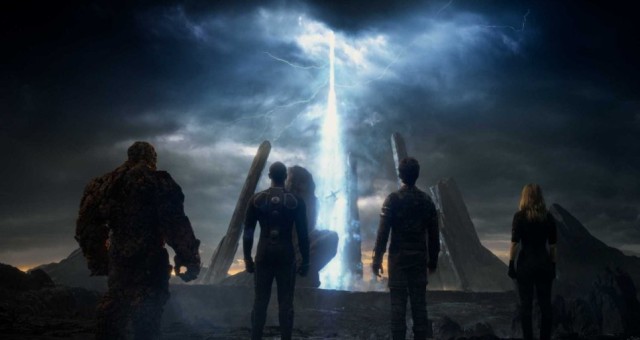 Fantastic Four is a superhero movie produced by 20th Century Fox about four individuals who acquire extraordinary powers and have to unite to defeat a threat that could destroy the Earth. It opens with a very young Reed Richards and Ben Grimm with the former working on an experiment that he believes will allow him to teleport matter. He comes closer than he’s ever been before but he takes out the power from the entire city. But he doesn’t give up and years later when he’s in high school his luck changes at the school’s annual science fair. His teleportation device does actually work but it returns some weird sand to him that he assumes is just from some desert. However, Franklin Storm, the director of the Baxter Foundation sees this experiment with his daughter Sue Storm and approaches him in order to recruit him to join the Foundation. It’s a research foundation funded by the government, and Franklin Storm recruits young geniuses to help them tap into their potential while building revolutionary devices. Franklin Storm informs Reed that they’ve been working on this too and that his sand is actually from another dimension. And he makes an offer to Reed to join the Foundation, and even though it doesn’t extend to Grimm, the two are still close friends. The goal is for Reed to work with Sue, Victor Von Doom, and an entire team to complete the work on a Quantum Gate so they can explore this other dimension with the hope of discovering resources that could save Earth. And they’ll also have the help of Franklin’s son, Johnny, who’s been forced to help with the mechanical aspect after getting in trouble with the law. What they discover in this parallel dimension will change them forever, and create a new threat they never could’ve imagined.

With a long list of upcoming superhero movies for years to come, there are 2 main concerns I have about the list of new ones. And I’m one who believes the source material for superhero movies can vary so much that this can easily be a very strong genre for a long time to come. My first main concern is formulaic and repetitive origin stories, and the second, which isn’t just limited to superhero movies, is the desire to create a franchise at the expense of making even one good (and complete) movie. Fantastic Four, which could’ve been titled the Fantastic Lab, is the worst case scenario since it went to the extreme with my 2 main concerns and felt not only incomplete but wasn’t even entertaining as it stretched out an origin story like Mr. Fantastic testing his limits. The way they came up with the name Fantastic Four in the movie was ridiculous and I was thinking while it was occurring “don’t you dare have them choose the name that way.” Fantastic Lab would’ve been a more appropriate name for this movie because the focus the entire movie was on this one experiment to enter an alternate dimension. That was the focus when Reed was a little boy, it was repeated when he was at a high school science fair (yes, really), repeated once he joined the Baxter Foundation, and repeated even AFTER they acquired powers. But I’m getting ahead of myself so I have to explain a few things.

Everything about this movie wasn’t terrible. I actually found the attempt to explain how they all acquired different powers despite being exposed to the same element interesting. It seemed like a sci-fi embrace that attempted to explain this change in a more realistic manner. Unfortunately this was brief, and everything else about the movie was pretty terrible. There was practically no character development throughout and minor character details were revealed as if it was all being stretched out for another movie. The initial introduction was the most that was given about each character so even Doom’s jaded mentality and anger wasn’t even explored and he was portrayed as just a troubled kid. Since the focus was on the experiment and dragging it out as much as possible there wasn’t much for any of the characters to do. Even a budding romance between Reed and Sue was forgettable because the characters lacked any substance so their interactions did as well. The only time the characters showed any initiative was when they decided to use their invention first so they would be the ones to step foot in the alternate dimension so they would be the ones remembered, although this was mainly due to a drunken stupor. 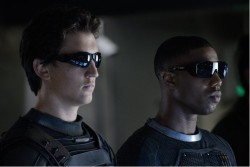 I’m don’t know what would qualify as a spoiler because I’m still not sure where the movie actually began. Somehow a prequel to a prequel was created with this movie. I was shocked that even after they acquired their powers they still had nothing to do, and the one opportunity to start entertaining sequences when Reed went on the run was immediately halted because he did absolutely nothing during that time. It’s as if there was a firm stance against a movie actually breaking out in the midst of this super long prequel. I was really frustrated at this point. Sue just spent her time balancing herself in a field, Johnny had about 10 seconds of flight time, and Grimm’s exploits with the military was reduced to just post-op footage. There was no story and as a result no action. There wasn’t even conflict with the military because at least that would’ve been interesting. There was no real world context given to any of these events because it was all about the lab so when the Earth was put in danger it felt hollow. And the confrontation with Doom is not even worth mentioning. So many changes could’ve been made to make this an entertaining movie but there’s no point in listing them here. And maybe there’s truth to the statement that this wasn’t the director’s vision but it’s truly time for the rights to return to Marvel because it couldn’t get worse than this.

The Fantastic Lab, I mean, Fantastic Four is a terrible movie that is the epitome of all that could go wrong not only in superhero movies but with the franchise building mindset at the expense of quality movies. It has the dubious distinction of feeling like a prequel to a prequel that gives the actors nothing to work with and lacks a true story. The brief attempt to explain the acquisition of different powers is mildly entertaining but the fact they did nothing with them overshadows everything else. I do not recommend this movie, even if the desire is just to see it out of curiosity. As the saying goes, move along, there’s nothing to see here.