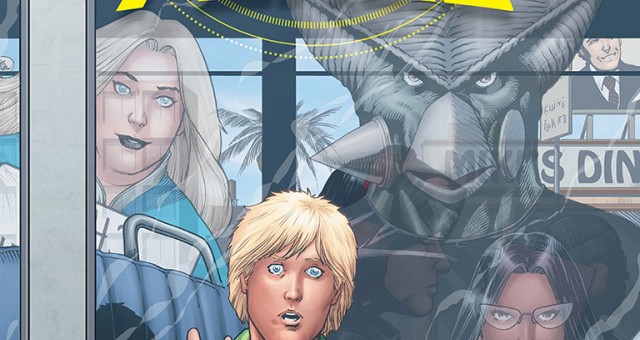 Faith and the Future Force #4

Faith and the Future Force #4 is the conclusion to the series and has Faith recruiting one more person to help her defeat the reality-erasing robot. It opens up 15 years in the past in Hollywood with Faith watching Chris Chriswell get off a bus. This is well before Chris’s acting career or he became her archnemesis. However, she believes that his villainous nature makes him perfect to deal with the robot. She knows that the weakness of some villains is their propensity to monologue. And she thinks Chris would find the robot’s weakness in a direct confrontation.

Faith tells Neela that her plan would work if they’re able to convince Chris that they’re hiring him for a role in a movie. So they approach him and convince him that they’re making a movie and they want him to be the star. But they have to tell him that he’s not the hero but a villain. And he’s playing the role of the villain who wants to rule the world so he has to stop the one trying to destroy it. Will Faith’s plan, her last resort, work? 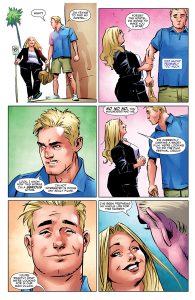 Sometimes I try to imagine how much fun Jody Houser has when writing Faith. Regardless of the tone of the story arc, there’s a wonderful consistency to the quality of Faith’s character. There’s still character growth/development, and even when she makes a surprising decision it still feels impressive. This series has shown the range of the character culminating with an excellent issue #3. And this issue shows her evolving with her use of Chris Chriswell.

I admit it took me a long time to be sold on Chris Chriswell throughout Faith’s series. And I’ve been trying hard not to judge the evil robot in this one on its overly simplistic box look. However, I was curious about what Faith had planned. Faith and Neela’s “recruitment” was entertaining and witty. It also delved into Chris’s backstory in an intriguing way. And Faith’s understanding of the character and influence of the character’s origin has potential beyond this series. And I enjoyed seeing Faith’s explanation about why she thought this would work.

I was skeptical at first about how things could be wrapped up. If the entire might of the Valiant universe couldn’t stop this robot how could Chriswell? So I was pleasantly surprised about how entertaining the interaction was between Chriswell and the robot. It wasn’t particularly exciting but still entertaining. And more than that, it was a believable solution. It felt like it became more about Chriswell’s idea of what made a great villain. As a result it made me respect Chriswell more as a formidable foe to Faith. And created a satisfying conclusion to the series.

Faith and the Future Force #4 is a satisfying conclusion to the series. Chris Chriswell “defeating” the robot doesn’t take away from previous attempts by Valiant’s heroes to stop it. The logic used is consistent and reveals a lot about Chriswell’s mentality. And it sets up Faith’s next story arc in a wonderful way. It doesn’t delve into the robot’s backstory in terms of it becoming so invincible as much as I hoped. But thankfully it touched on it enough to successfully conclude this story arc.