Faith #4 continues with Faith and Archer attempting to stop the madman using magic to create chaos at Comic-Con. It opens up with Faith facing off against a clone of herself created by Murder Mouse but both of them warn Archer to be careful because the other is evil. This causes some confusion as one Faith asks the other if she’s evil. After much back and forth showing they have pretty much everything in common, instead of fighting they decide to team up to stop Murder Mouse. While attempting to track the criminal down, Faith imagines what her life would be like if she had a permanent duplicate of herself. But can she trust this duplicate considering she doesn’t know the true depth of Murder Mouse’s power? And what is Murder Mouse’s real plan? 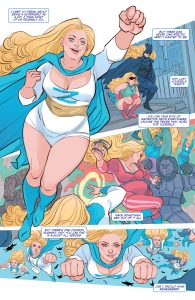 Coming off the excitement and energy from NYCC, I was looking forward to seeing how this issue would conclude Faith and Archer’s time at Comic-con. Granted Murder Mouse wasn’t the most compelling of villains but the issue wasn’t focused on that. It was more about Faith’s inner monologue and the experience of being at the convention with Archer. So the tone of this small story arc wasn’t in question but the start of this issue made it even clearer with Faith facing her duplicate. This was to answer the question, “Who is Faith Herbert?”

I appreciated the way the standoff didn’t turn into a generic battle against oneself. And it made perfect sense for the two of them to not only team up but find it cool to do so. It was a great way to explore the character through the ways she imagined her life would be with a duplicate. There’s always been a self-awareness that isn’t quite as intense as Deadpool breaking the fourth wall but is effective for her. This was so well done that the convention tips almost felt like a distraction from this inner monologue.

The hunt for Murder Mouse was a way to move the story forward and aside from being a menace he never felt like a true threat. His plot did consist of other duplicates and I won’t give that away. The action was surprisingly exciting and that was due to Pere Perez, Andrew Dalhouse and Marguerite Sauvage’s artwork. But it was the final sequence that brought everything home and truly answered the question of what kind of superhero Faith is.

Faith #4 is an entertaining issue because it does a great job in defining Faith Herbert. Jody Houser’s unique take on Faith dealing with her duplicate is refreshing and enjoyable. Murder Mouse still isn’t the type of villain I would want to see in future issues but he serves his purpose as one attempting to foil the convention. So now after these first 4 issues I’m looking forward to a deeper story arc.