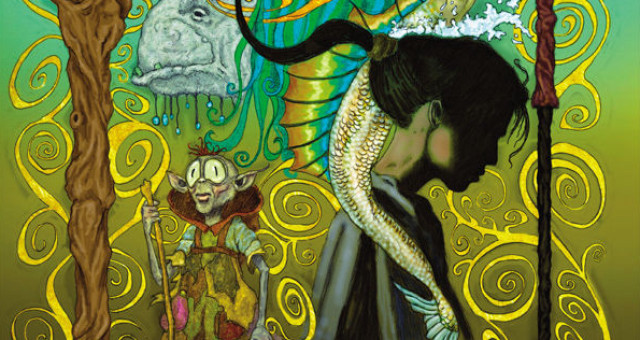 The Eye of Newt #2 continues with Newt preparing to go on his most treacherous journey ever, and his master is giving him final advice on what to do in the Netherworld. When they arrive at the starting point there’s a slew of wizards and witches all ready to see the two apprentices who have been called to this trial. The oldest wizard tells Newt and Morgan Le Fay, the other apprentice, the purpose of the trial, which is for them to each retrieve a powerful talisman for their staff and wand, respectively. That’s something Newt already knew but he’s puzzled when his master introduces him to the old wizard as Arthur Pendragon because that’s the first time he’s ever been called that. Even when he finally enters the Netherworld this name is still weighing on his mind but he soon forgets it as he encounters Morgan who snaps at him and accuses him of following her. However he knows that isn’t the case since their masters showed both of them the path and they’re just following it. Knowing Morgan isn’t allowed to kill him he’s still frightened when she states that she still will, and even more than that they will actually need each other in order to succeed at this trial. But can they put aside the old hatreds of their order to complete the trial or will they succumb to all the tribulations in the Netherworld? 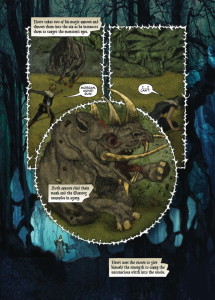 Overall I felt the first issue showed the potential of the series with its stunning artwork urging the imagination to become fully immersed in the world being created but the execution was somewhat off with characters appearing and leaving suddenly and events feeling disjointed. This issue starts off in a similar fashion with its easy to follow setup, and the introduction of Morgan Le Fay is done unceremoniously but context is given to her personality soon enough. Of course the two of them start off at odds with each other despite not understanding the history of the two warring sides except being told that such is the case. However the arrangement is very intriguing considering they didn’t have any personal animosity towards each other, and the mystery behind the two of them being called to trial together is one that has the potential to be very rewarding. One problem I had with the first issue was the propensity to describe every scene instead of letting the beautiful artwork speak for itself and put a spell on the imagination, so I was pleasantly surprised at the fact that was scaled back this issue. It becomes apparent early on that Newt and Morgan need to work together in order to traverse the Netherworld and succeed, and I enjoyed how that transition was made without an unnecessarily drawn out ordeal prior to that occurring. But as it got deeper into the issue I noticed something I couldn’t shake and that was how I wasn’t as engrossed in the story as I wanted to be. Yes, it is indeed a magical world filled with many wondrous creatures and mystifying landscapes but the writing doesn’t flow in some instances, and towards the end that makes some developments seem random initially. For example, Newt’s use of his ring doesn’t feel as exhilarating or as impressive as it should and instead comes off matter of factly.  And I don’t know how long the journey will last but hopefully there will be more character development in terms of Newt and Morgan’s interactions and back story considering there was something special that chose both of them and that has yet to be shown. But there is still tremendous potential in this series and I look forward to the next issue.

Eye of Newt #2 is an okay issue that improves on some things from the first issue but never quite feels as engrossing as it should be. The artwork is still fantastic and indicative of a magical world seeking to grab the imagination yet a lack of the characters’ back stories or interactions that showed depth limits the understanding of them being chosen for a mysterious reason to take part in this trial. However Eye of Newt #2 would seem to be an excellent read for a children’s story with its abundance of characters and various events, and aside from that it still hasn’t reached its full potential.