Droidscape: Basilica is an iOS puzzle game developed by Kyttaro Games and features a droid named Bishop 7, who must navigate the Basilica space station to rescue one of the remaining Chronomancers named Atherion. It’s not an easy task as the space station was commandeered by the Cortez corporation as part of a war that has raged for aeons between the clergy, corporations and the TAL guild, which Atherion belonged. While Atherion was locked in a cell in which he’s unable to use his time manipulation abilities, he was able to activate a bug he planted earlier in the manufacturing deck and as a result create Bishop 7. However, Bishop 7 is unable to navigate the spaceship on his own while avoiding hostile forces so it’s up to you, as Atherion to plot Bishop 7’s course ahead of time so he can safely navigate the spaceship and rescue Atherion.

Droidscape: Basilica opens up with an in-depth story explaining all that occurred that lead to Atherion’s capture and gives a heavy backstory to create a sci-fi world where it’s possible to enjoy it outside of the actual game play. This doesn’t just take place before the game play starts but continues between each completed level with more of the world it’s set in being revealed with each progression. It is a nice touch and one that is appreciated when you get further in the game and become more engrossed in it. But that only works because the game play is actually enjoyable and worth taking the time to make progress through the 60 levels currently available.

The game starts out with a simple tutorial to guide you regarding its game play mechanics and gives instructions throughout the game when a new enemy is introduced or a new item is introduced on a level. You have to first draw a path for Bishop 7 and you do this by dragging the circle that surrounds him in the direction you want to go until you reach the exit on the map, which can only be opened by getting the corresponding key. So you’re essentially drawing the path with your finger. After you draw the path you enter Bishop 7’s action phase and you can only control Bishop 7’s forward and backward movments on the path you’ve already drawn. You do this by touching either right or left of a button towards the bottom of the screen and you control the speed by how far you press to the right (or left) of the button. The thing is you only have 60 seconds to complete this part, unlike the previous part of drawing the path in which there’s no time limit for that. And you only have a certain amount of energy so you have to draw your path wisely to not run out of energy before reaching the exit and you will have to monitor the green energy bar right above Bishop 7’s head. And there are a number of gems to collect on each map that adds to the coins you have, which can be used to buy power ups (or skip a level) so it’s important to include their locations in your path.

The first few levels are straightforward and the enemy droids that are on those levels are straightforward too and you just have to time your movements correctly after drawing the path. The good thing is you can erase your path, partially or completely, while drawing it so if you make a mistake while drawing, which is possible since the controls are very sensitive, you can correct it easily. And when you’re controlling Bishop 7’s movement and realize the path you’ve drawn won’t work you can go back to the drawing board (bad pun intended) and plot a better path.

It becomes more complex as maps get larger, enemies become more numerous and additional color coded keys and corresponding doors are added. So you’ll have to take all of that in consideration because it’s not so much about reaching the exit as it is about getting the color coded keys in the correct order to open the necessary doors to reach the exit. And every time you move you use some of Bishop 7’s energy so you have to include in your path the energy refill pods available and also be mindful of how long it takes to refill your energy since you only have 60 seconds on each map. It’s actually quite enjoyable because you’re required to use strategy and since the enemy doesn’t move while you’re drawing the path there are times you’ll have to go back and change your path based on their movements. If an enemy touches you even once you’re destroyed.

If a level is too difficult for you it can be skipped for 500 coins, or you can buy power ups to help you and they can be used at your disposal. There are 3 power ups: Complete time refill, complete energy refill or a shield.  So if you’re low on energy or time you can use one of these power ups. And it does get more difficult as new enemies emerge with different patterns. Some move in a straight line, others circle an area and there are those who follow your every move. And if that wasn’t enough, hazards are added to the map such as spikes that appear after you walk across an area once so not only do you have to keep moving but you can’t even go back the same way you came in order to reach another area. This definitely kept the game play fresh and the later (and longer levels) were more challenging and enjoyable as the different elements would end up being together on one map. That’s when this game was at its best. And not everything on the map is there to destroy Bishop 7 as there are bombs on later levels that can be activated by touching them with your finger and they automatically blow up after a brief countdown. This can be used to destroy enemies on the map such as the ones that follow you but it can destroy you as well so you have to be careful. And since there are a total of 4 worlds with 15 maps you have to complete on each world, it was necessary for the game play to keep adding new elements so it wouldn’t get stale. 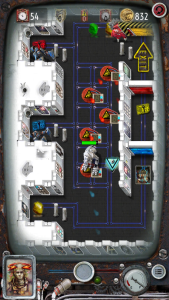 Even though the levels were very enjoyable, the designs were great, and the new elements every few levels kept me engrossed, I wish it was a bit more challenging and I don’t mean that in a sadistic way. I mean that in terms of longer maps like in the last world but earlier in the game because the game play is very enjoyable and this would involve more of the elements that made this game fun, including the strategy required to plan a path. You can switch the controls for more of a challenge and use the HeadTwister tech, which only works during Bishop 7’s action phase. You need to have a forward facing camera and your face appears in a box in the lower left corner. You move by twisting your head. The idea was interesting but I couldn’t quite get it to work for me properly, especially in situations where the slightest movement could result in being destroyed. Thankfully the analog controls worked very well.

Droidscape: Basilica is an entertaining iOS puzzler and with its numerous levels, enemies and game play elements, it provides hours of enjoyable game play. The opening story as well as the tidbits of information regarding its world and the history of its faction adds a nice touch and has a conclusion that will leave you wanting more. I highly recommend this game for all fans of puzzle games because even though it isn’t the most challenging game out there now it definitely is unique and will leave you satisfied.