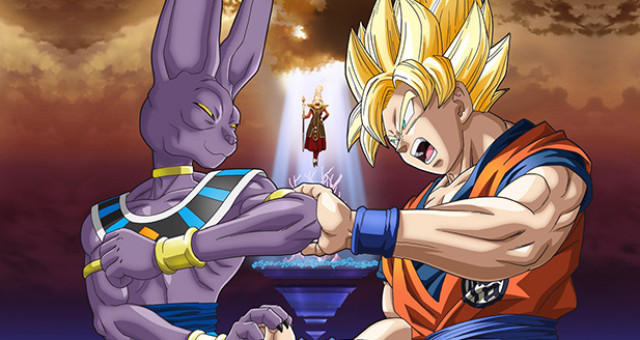 Dragonball Z: Battle of Gods is the latest DBZ movie released and 17 years after the last one was released. It opens up with the Kais in a panic because Lord Bills, the God of Destruction, has woken up from his decades slumber early, and as his name makes clear, he’s not only more powerful than all the Kais but he is in the habit of using that power to destroy planets and galaxies when he is displeased. Goku, who is training on King Kai’s planet, overhears the Kais discussing this and since he’s always up for fighting a powerful opponent, is eager to meet Lord Bills. Apparently the feeling is mutual, as Lord Bills is informed by Whis, his mysterious helper who informs him of events that take place during his slumber, that Frieza destroyed planet Vegeta and he was in turn killed by Goku. And Lord Bills saw in a dream, as well as being told by an Oracle, that he would face a formidable foe and he refers to this foe as Super Saiyan God and wants to find this Super Saiyan God. Can the universe survive while Lord Bills is awake, or will his quest to find this Super Saiyan God come up empty and result in him destroying galaxies out of frustration?

I was looking forward to this movie ever since it was announced because I’m a big Dragonball Z fan and it’s been 17 years since the last movie but I admit I wasn’t sure what to expect. The trailer looked incredible and only fueled my excitement, so I did have somewhat high expectations of this movie. The premise was simple, an incredibly powerful yet volatile god waking from his slumber and searching for something called the Super Saiyan God so he could enjoy a fight. So Lord Bills is not an evil foe nor does he have any plans like Frieza or Cell to dominate a planet or galaxy, and his powers greatly exceeds the power of the Kais. So when he arrives on King Kai’s planet to meet Goku and inquire about the SSG. Goku tells Lord Bills that he’s never heard of the SSG and to the horror of King Kai, who is showing Lord Bills the utmost courtesy, Goku asks Lord Bills if he would do him a favor and spar with him for a little while. Lord Bills grants Goku his wish and Goku demonstrates the different levels of being a Super Saiyan, and even though he’s hesitant to attack Lord Bills with his full power since it’s a friendly match, he does so at the urging of Lord Bills and is beaten extremely easy at SS3 with two hits. So the power of Lord Bills is not a myth.

Since Lord Bills didn’t find what he wanted on King Kai’s planet he decides to go to earth to question the other remaining Saiyans to see if they know. And there is some history between Lord Bills and Vegeta when he was a child, so when King Kai contacts Vegeta to let him know Lord Bills would be arriving, Vegeta is fully aware of how important it is to treat Lord Bills as an esteemed guest and not anger him. And it just so happens that it’s Bulma’s birthday so everyone is there just having a good time.

There are some humorous moments as Vegeta is the only one who actually knows who Lord Bills is and even though everyone else is treating him with respect, they don’t fully grasp Vegeta’s behavior in going overboard to appease Lord Bills. If you ever watched DBZ the series or any of the movies then you already know that humor could be a big part of it so there’s nothing unusual about the humor, even when the humor does seem silly for a little while. Emperor Pilaf and his band makes an appearance so that can be expected since they are no threat in any situation at this point. So it’s pretty much Lord Bills being entertained on earth and enjoying things he’s never tasted before, and this lasts for some time since there is no Super Saiyan God. If you understand that Lord Bills is not truly an enemy then it has its entertaining moments.

There is action and even though what sets Lord Bills off is silly, and acknowledged as such later, the threat becomes very real and I was fascinated watching Lord Bills handling the Z Fighters in the ways that he did. Of course Vegeta gets in the mix and if you’re a huge fan of Vegeta, there is some great fanservice here, including what allowed Vegeta to exceed his current level. Once the action picked up I started enjoying this movie even more. And Lord Bills as a new character worked on many levels and to avoid any potential spoilers I’ll just say that he was shown as a well-developed character. There were no excessively long stand offs in this movie, and the later justification for the inevitable final battle between Lord Bills and this foe he seeks is ok. This part made me wish there was less Emperor Pilaf and more of everything else. The action sequences one would expect from a DBZ movie doesn’t disappoint, and the conclusion, in my opinion, would be a great starting point for more DBZ storylines.

Dragonball Z: Battle of Gods is one of the better DBZ movies (top 5) and after 17 years of waiting was very enjoyable. Lord Bills is a great new character and the revelation at the end is hopefully a starting point for more DBZ movies or shows. The action was intense at times and it was sick watching Lord Bills handle the Z fighters the way he did. I do wish there was a little less Emperor Pilaf and instead more time was given to other characters but the humor did work at times with me. If you’re a DBZ fan you will enjoy this one and will welcome these new developments, so I definitely recommend watching it. If you’ve never liked DBZ, this movie won’t change your opinion overall, but is still a fun movie to watch.