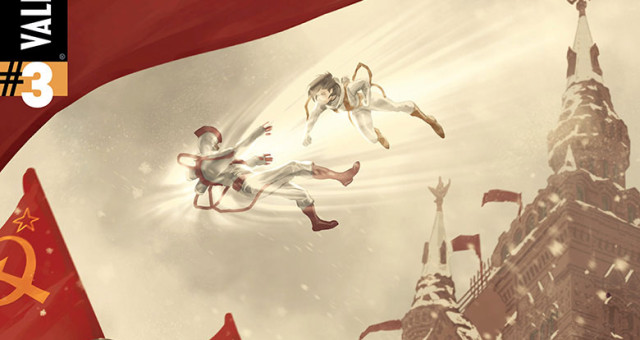 Divinity II #3 continues with Abram attempting to teach Myshka the limitations of her powers in terms of impacting the past. It opens up with him using the example of her attempting to visit Stalin in the past and influence him, and how she only fueled his paranoia even more. Myshka doesn’t believe him and feels that Abram’s limitation is due to his own weakness and lack of ambition. So instead of just talking Abram leads her to the past using one of her memories, and it’s when she was a child in the bread line.  He tries to tell her as a child that everything will be okay but the current Myshka intervenes and the people of that time just view it as another fight on the bread line. Feeling like he violated her memories she decides to do the same with him, bringing the both of them to a time in his past. Meanwhile, MI-6 can only watch helplessly as all they see is Abram and Myshka phasing in and out of time. Can Abram stop Myshka before she causes more harm in the current world or is he right about the fact that even with these abilities they’re limited to how much they can influence in the past? 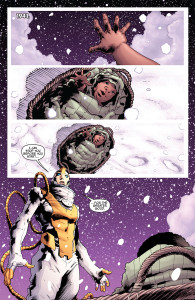 There are no other series in the Valiant Universe that is capable of adding to it like the Divinity series. This issue is the perfect example of that with Abram and Myshka exploring various time periods while no other character is even capable of understanding what’s going on. The first Divinity series didn’t truly explain the extent of Abram’s powers making it seem as if it was nothing more than generating hallucinations at times but this issue, and this series, explores the depths of this power in a fascinating way. And somehow it still manages to contain enough character development to make both of them more intriguing.

I was surprised at first to see this issue start with Myshka and Abram battling in present day Moscow since last issue concluded with her meeting with Stalin. Then it made sense when Abram started explaining that they could only have limited influence on the past. But the way this was done was fascinating showing events from Myshka’s life as a child and how nothing changed. I was curious whether this was a memory Myshka had from her childhood to solidify Abram’s stance but this issue neither confirmed nor denied it. And when Myshka attempted to kill Abram as a baby it was the perfect opportunity for Abram to explain why she couldn’t do such a thing. 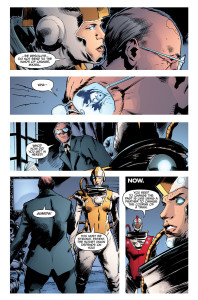 I wondered why Abram allowed himself to be locked up watching memories and images of his wife and daughter instead of traveling to the past and interacting with them that way, and this issue implied that maybe he did attempt to do so. I appreciated this fact because it became clear that Abram did indeed know the full extent of his powers in terms of achieving personal desires, and also had an intimate understanding of what Myshka was experiencing. The exploration of their pasts and the various scenarios were all part of the entertaining character development and the fine-tuning of the context of their divinity powers.

There wasn’t much physical action aside from the brief moments Myshka tried to inflict pain on Abram to no avail but there was enough of it to keep the flow of the story interesting. But the real action was in their conflicting views on how to use their abilities and it was beautiful that it didn’t feel like psychobabble and instead centered around actual events. There was a beautiful spread where Abram explained that time has its limits and compared it to a book. And just like the two of them kept journeying through different time periods I felt engrossed in everything they were experiencing. My only slight complaint would be the conclusion not because it was horrible but because I don’t expect it to carry much weight next issue. Otherwise this was another captivating issue.

Divinity II #3 explores Abram and Myshka’s powers in a captivating way and is successful with its character development in terms of defining the limitations of those powers. The journey through time is handled in a masterful way and makes me not only appreciate Abram more connects his understanding with Myshka’s current struggle as she seeks to hold on to a world that no longer exists. The dialogue and scenarios are engrossing, and for what it lacks in physical action it more than makes up for it with the metaphysical struggle taking place. And I’m glad this issue stays true to what has been the defining nature of the series and delivers on another entertaining issue.