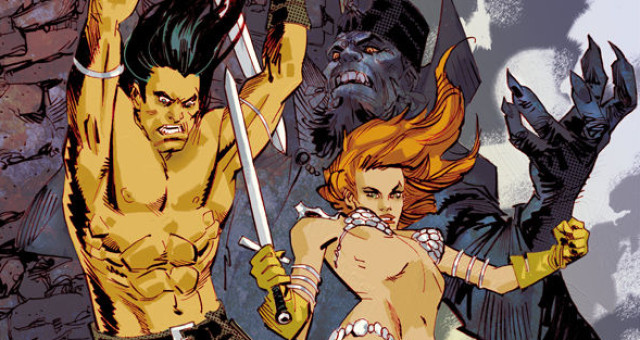 Conan Red Sonja #4 is the conclusion to the series and has the duo facing off against the monster behind the Bloodroot infestation. It opens up with Red Sonja contemplating Thoth-Amon’s words to kill a wounded Conan or else he’ll destroy her homeland but she refuses. She states that she’ll never kill Conan even if it brings harm to her, and that Thoth-Amon’s a honorless dog whose word means nothing. This doesn’t stop Thoth-Amon from unveiling the true origin of the Bloodroot or the fact that he just wanted them to fight for his own pleasure, and it wasn’t crucial to his plans. He reveals a portal he claims reaches those who walk among the stars, and that they were responsible for the Bloodroot. The portal causes Conan’s Bloodroot vein to worsen, and results in him apparently passing out due to agony. And since Red Sonja is weaponless, Thoth-Amon uses the Bloodroot to surround her while he focuses on his near victory. With Conan appearing to be out for the count and Red Sonja weaponless, how can the duo hope to stop Thoth-Amon when they don’t know what will arrive through the portal? Or has he underestimated them one final time?

This has been a highly entertaining series, and I’ve been looking forward to the conclusion with bated breath. Considering everything that occurred this series, I felt it was sort of weak for Conan and Red Sonja to duel because of Thoth-Amon’s promise to spare the winner’s homeland from the Bloodroot. So it was good to see early on that Sonja would reject his offer, and she and Conan would formulate a quick plan against him. I was very intrigued when the wizard would talk about those walking among the stars but this issue wouldn’t go into deep detail about them other than the beast that was revealed to be in the portal. Unless the series focused on that aspect, I was pleased with how much was revealed because it keep the focus on Conan and Red Sonja, and allowed them to do what they do best. And Randy Green’s artwork was more than enough to tackle the task of this extended action sequence. Every slash and strike the duo made was easy to follow and the excitement from the intense battle was apparent in their movements and facial expressions. It was just a joy to see. And the Bloodroots diabolical nature and twisted origin was wonderfully drawn throughout this sequence. But it wasn’t just the artwork but the writing as well, giving life to this battle and more gravitas to what would just be a vine otherwise. This series started off as one that would tell a tale of the two warriors accomplishing great deeds, and this issue succeeded in that as the conclusion to the story was thoroughly satisfying. And even more than that, the character interaction between the duo was just as delightful as it’s been throughout the series, casting the two in an even better light. And now, I need more Conan Red Sonja stories in my life.

Conan Red Sonja #4 was a satisfying conclusion to a series that successfully avoided all the potential pitfalls of such a crossover due to its excellent writing and character portrayals. The confrontation between the duo and Thoth-Amon was worth the wait, and the extended action sequence with them fighting the one truly responsible for the Bloodroot was impressive. This issue almost had me convinced that the duo could’ve fought a twig and the writing would’ve made the conclusion sound epic in portraying the two as heroes. If you’re looking for a fun action series with solid character portrayals, look no further than this one.