Conan Red Sonja #1 is a new 4-part series co-written by Gail Simone and Jim Zub as a crossover between Dynamite and Dark Horse comics. It features the two warriors as they face a threat unlike anything they’ve experienced to this point in their lives. This is long before they became well-known warriors, and it opens up in the city of Enshophur where Red Sonja is a spectator at a bloody sporting event pitting man against beast in the prince’s honor. The king plans on giving him a rare jewel at the end of the night, or rather that’s the rumor, and it has attracted Red Sonja’s attention. So she curries favor with the one who organized the spectator event in hopes of infiltrating the castle later to make her move. And she does but not without warning the organizer that if he doesn’t stop killing animals for fun as part of his events she’ll be back to find and kill him. But she’s not the only one with her eyes set on that prize as Conan, the Cimmerian, intends on claiming it for himself. Maybe one thief could do it and sneak out without alerting the garrison but if they cross paths before taking the jewel will they end up fighting to the death or form a shaky alliance? Meanwhile, Manus Drath, a mysterious traveler arrives on the Barachan Isles bearing a strange seed that he claims will change the world for his master. The farmers on this remote island are being well compensated so they prepare to plant the seed with no objections. What is this mysterious seed, and how is it connected to Conan and Red Sonja’s respective rise to notoriety? 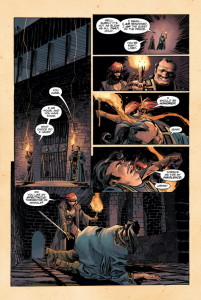 I’ve had an affinity for Conan and Red Sonja for as long as I remember, going back to my days as a kid when I first saw the Red Sonja movie including Conan. And over the years I’ve read many separate Conan and Red Sonja stories, and I’ve enjoyed many of them. This crossover series combines the Red Sonja version currently being written by Gail Simone in the ongoing series for Dynamite comics and Jim Zub’s version of Conan. However you don’t need to be familiar with any of their previous series in order to pick this one up and enjoy it. This isn’t an origin story but since it takes place before either of them were famous warriors it’s the perfect jumping on point. And early in the issue the different styles are apparent as Red Sonja has her way to infiltrate the castle using a variety of tactics, and Conan has his methods. And the styles are representative of their personalities in just a few pages, and that’s a testament to the excellent writing. So even the artwork by Dan Panosian adds to this as Red Sonja’s movements are clearly different from Conan’s, and it may seem small but that detail is very much appreciated. And the two of them work very well together since they form a temporary truce in order to escape the castle and then decide later what to do with the stolen prize. Of course they create more trouble for themselves along the way. But the story progresses extremely well, and capitalizes on the great character development throughout. I won’t give away any spoilers but this issue had the distinction of being a fun read that was so thorough it almost felt like a self-contained issue. One of the many things I enjoyed about this issue was the fact that when swords did clash it wasn’t the manufactured cliché reason when characters crossover but a natural development in the story with a resolution. So I not only felt engrossed in the story but invested in the characters and their enjoyable yet resolute behavior. And despite feeling like a self-contained issue, more than enough is set up with the reveal at the end that things are only getting started for these two warriors. And I’m completely on board with that.

Conan Red Sonja #1 is an excellent start to the crossover series with its entertaining portrayal of classic characters, and a story that brings them together in an organic way. The differing styles were established early on to introduce the characters so even if you’re completely unfamiliar with them you’ll still be able to fully enjoy this issue. The initial theft of the “jewel” is enjoyable but the connection to a larger story and threat leading into next issue is even more engrossing, and I’m looking forward to seeing the two of them working together to confront this. The artwork captures the tone of the series wonderfully, especially the twisted nature of the threat, although some panels from a distance could lack the finer details. However, if you’re looking for an entertaining read or ever enjoyed either of these characters, then you should definitely check out this issue.