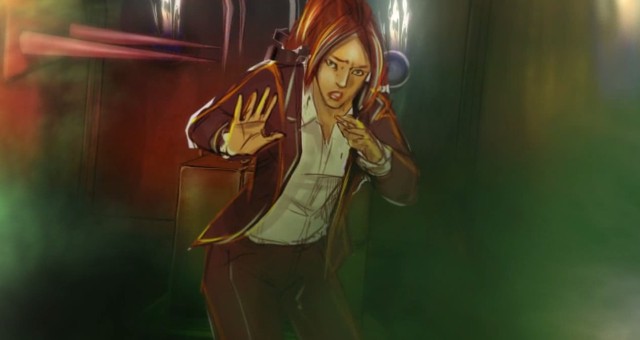 Cognition Episode 4: The Cain Killer is the conclusion to the excellent series developed by Phoenix Online Studios starring Erica Reed, the FBI agent with special cognitive abilities, in her quest to finally catch the ruthless Cain Killer. (Spoilers for episode 3 ahead) After the shocking revelation of the identity of the Cain Killer and the connections between all the recent events, Erica is more determined than ever to put an end to his murderous rampage. As things come full circle, this episode opens up with Erica and John tracking one of the suppliers of the parts of the Cain Killer’s death traps, and it’s finally revealed how Erica and John knew her brother, Scott, was taken by the Cain Killer. It’s also revealed why the Cain Killer disappeared for a number of years until Erica freed him. But with John shot by Erica and the Cain Killer loose once again, can Erica stop him for good with Cordelia’s help, or will recent events cause her to deteriorate mentally and not only fail in stopping him but result in those around her losing their trust in her or worse?

Series finales can be tricky things. They can make you feel as if all the time you invested in the series was worth it or can make you yearn for and reminisce over better times in the series. So I can appreciate the difficulty faced in such a situation. When it comes to video games there’s the additional question: if a series is highly successful why kill it off? This can lead to a finale feeling watered down and predictable because it’s about the next entry as much as it is about the current one. My point is that when it comes to series concluding, in addition to anything I might feel about a series I enjoy ending, there’s also some apprehension that tempers the excitement I feel. So I was very relieved that  Cognition Episode 4: The Cain Killer started off the way that it did because the conclusion would at least be satisfactory in terms of answering all the pertinent questions raised during the series.

Everything changed for Erica the night her brother was murdered in front of her and she was unable to prevent it using her powers. Not only did her powers spiral out of control and force her to seek help from Rose for the first time but those closest to her started to view her differently based on her very personal connection and understandable obsession to the case. And with the death of Davies, her part-time partner/lover in the hospital after the gruesome kidnapping in Episode 2, and now shooting her own partner, Erica is viewed as detrimental to the case. And as was the case with all previous episodes, there’s a new game play mechanic that determines one of the potential outcomes in all intense situations and it’s a measurement of how a specific character trusts Erica. In the bottom right corner is the head of the character whose trust in Erica will directly impact the situation and the more it’s filled the greater the trust. This isn’t a gimmick because if a character doesn’t have enough trust in Erica then she will be killed (or another character) and this happened to me… I mean, the testing of this new game play mechanic was successful. So for example, the first scenario you’re given is an undercover operation where you have to trick a very volatile gun smuggler into giving you information about the Cain Killer. If you give the wrong answers not only will his trust go down but he will kill you. So your answers affect you, others in the situation, and in turn, the trust that others have in you who are connected to the characters in the situation.

This is a great addition, and if you followed the series you see how it works because the Cain Killer’s schemes are as much about psychological torture as they are about murder. And this game play element is incorporated into the story, which continues the use of Erica and Cordelia’s supernatural powers as a story-telling mechanic, and you can switch between the two once again. And I could appreciate the beauty of the tapestry woven since the opening scene in the first episode and throughout the series because it all comes together, and yes, even Rose’s backstory is revealed. It’s not easy being a Psion.

The story is well-paced and the puzzles this time around requires the use of Erica and Cordelia’s powers in conjunction. They are challenging but very solvable with patience and observation. Despite the use of these powers in prior episodes, the way you’re required to use them here with the new puzzles makes the puzzles and the powers feel fresh. And the reward is more than just feeling satisfied from solving a puzzle but actual story advancements in terms of uncovering the Cain Killer’s next moves, as well as his awareness of Psions (individuals with powers like Erica and Cordelia). The unfolding of the story is solid, however there was a point where I wondered how Erica got an item in a car and I won’t reveal which part because it’ll reveal some of the events that take place. Other than that the story is very consistent. To see Erica pushed to the edge (and pushing others) was a natural development waiting to happen since the opening scene in episode one. And despite my uncertainty when approaching finales, as one who has played the entire series, even though I was introduced to it late, I am VERY satisfied with the overall story arc as well as the story and conclusion in this episode. Somehow I think that Cordelia already knew that.

Cognition Episode 4: The Cain Killer is not only a great episode but an excellent culmination on a series that should be considered a crowning achievement for Phoenix Online Studios. This was a series where the time invested was not only rewarded every single episode but ended with a conclusion that should leave all who’ve enjoyed the series very satisfied. The puzzles requiring Erica and Cordelia to work together to solve, as well as the new game play mechanic prevented this episode from feeling like it was just going through the motions, so-to-speak, just to reach the conclusion. I felt satisfied that no stone was left unturned and all pertinent questions were answered. Will there be more of Erica Reed in the future? Well you have to play to see if she survives. And even though building up trust was a new game play mechanic in this episode, I know feel that the Cognition series has built up my trust to the max with Phoenix Online Studios. If you enjoy entertaining game play and a captivating story, I highly recommend the Cognition series