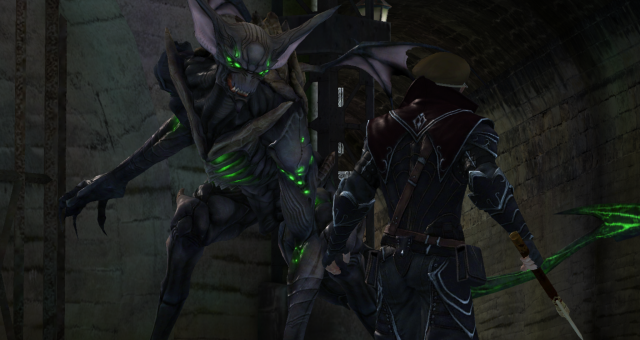 Bloodmasque is an action game available for iOS devices and developed by Square Enix. It’s set in Paris where vampires rule capriciously, controlling all functions of society, and treat humans, at best, as worshipping slaves, and at worst, as livestock for their insatiable blood lust. It started with vampires King Nicolae and Queen Marilena, who had twelve true-born children, and together the purebloods conquered nations with their unmatched power, and eventually their empire spanned countries. But as time passed a resistance took shape and rose up, dealing some losses to the vampires’ empire. With Nicolae out of the picture and his eldest son, Razvan Tiranul, slain, the empire started to crumble due to internal squabbling. Bloodmasque takes place in 1890 when the resistance is working to free France from vampire control once and for all. But Razvan’s sister, Dominique, has hatched a scheme to revive him and as a result revitalize the vampires’ empire. It’s up to you as a half-blood and part of the resistance to help put an end to that scheme. Do you have what it takes?

Prior to its release, Square Enix was promoting Bloodmasque as a game you would be able to use your own face for the main character like never before, and so I wanted to test this out instead of creating my character from a pre-defined template. It’s a very painless process but only works if you have an iPad or iPhone with a forward facing camera (or have pictures to use on the device already). You take 3 pictures of yourself: A casual face, a pleased face and an angry face. So when your character is responding to a particular situation it uses one of those three faces. It works for the most part if you can get a skin tone that matches to cover the rest of your character’s face or else it can look really weird.

But this game isn’t about designing a character as there’s business to take care of and the bloodsuckers won’t wait. The controls are very straightforward but there’s still a tutorial to get you acquainted with how they’re implemented here. As is standard now, the entire touch screen on your device is your controller, so when you enter into a battle you can focus on your opponent as opposed to some virtual gamepad. You tap the screen to attack your opponent and the faster you tap, the faster your attacks and combos. Instead of blocking in this game you have to dodge attacks and to do this you either swipe left or right, depending on which way you want to move. This is different from other games because you can actually move 360 degrees around your opponent regardless of whether your opponent is attacking or not. However if you time your movements just right and dodge a close attack you’re able to counter your opponent and unleash a flurry of hits. When you succeed at dodging a close attack the movements slow down and yes the words “counterattack” appears on the screen in case you weren’t sure. And you’re not hunting alone because for every battle with a vampire (not one of their minions) you have two companions that you select and these are actual characters of other players. They help you attack but they only do real damage when you fill up your vampire fusion meter, by taking damage or successfully landing hits and counters. Since you’re a half-blood, you can unleash a special burst attack, when your vampire fusion meter is completely full, damaging your opponent to a far greater extent and with your 2 companions each landing a critical hit. 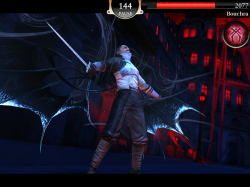 You’re not the only one that can transform because as soon as you defeat the vampire in human form, he or she transforms into their true form and you have to defeat them again. And these vampires don’t sparkle. And once you reduce their health to zero you have to perform a quick action successfully to drive a stake into the heart of the vampire finishing them off completely. And as reward for a job well done you acquire XP to level up in the form of blood. You share a portion of the blood harvested with your two companions, so it’s entirely possible that someone can use you in one of their battles and you can earn XP, which is stored in your blood bank, even when you’re not playing. This all sounds standard but the solid implementation of this makes the game very enjoyable. The controls are responsive and the fact that you can sync the game between all your iOS devices makes it very easy to play on the go. You can play on your iPad at night and pick up where you left off on your iPhone the next day. The great thing is Square Enix didn’t stop here. They wanted to make a very thorough game for iOS devices and I’m grateful for their efforts.

Bloodmasque wants you to feel immersed in its story and world, and it attempts to do this in various ways. The story itself is entertaining and is told through cutscenes with great voice acting or text, narratives between scenes, and a host of characters, including some well-known figures. As the story progresses you actually feel like you’re succeeding against vampire rule and making a difference, although I admit it tended to be a little heavy-handed with the number of mysterious damsel in distress scenes. And from your base of operations you not only have access to a store to upgrade your equipment but also a map that displays various locations in Paris you can visit.

Each location has a main campaign mission as well as additional side quests and this is indicated on the map before you travel there. You can travel to the different locations in any order you want and can choose whether you visit during the day or at night. You don’t immediately jump into battle, as you have to explore the area and locate the person offering the mission you’re looking for. Even though the areas are somewhat limited in size, you can still search for items or talk to some random people and this helps connect you with the “reality” of life in this world. You’re not just battling vampires but trying to help free a population suffering under their oppression while dealing with those who have become worshippers and slaves of the ruling vampires. This is where you also run into the characters of other players and you can form a blood bond with them through a simple click. These characters are just standing around so it’s not a form of multiplayer. And you have to be mindful of who you’re forming blood bonds with because there are different blood clans (vampire types), and also the equipment another player has can be crucial to your survival in battles. There’s a circular relationship between clans so one vampire type will inflict more damage on another, give more blood or gold in a victorious battle, or give an opportunity to acquire rare treasure. And for example, if you have a companion that is equipped with a shield siphon, they will stop a vampire from draining your health and vampire fusion meter with one of their attacks. If another is equipped with an item with the revitalize quality, you will be revived mid-battle if you lose all your health. And seeing as there are about 50 missions in all, spread out over 5 Acts, there’s plenty of opportunities for you to learn the different combinations. I was enjoying all of this thoroughly.

Bloodmasque is not without its flaws but it’s due more to a deliberate design as opposed to poor game play. The action is intense and even though some enemy models are recycled, there’s still enough of a variety later on to keep it fresh. However the opponent you’re attacking isn’t your only enemy. Every battle has a countdown timer and even though it isn’t a huge problem early on, it does tend to be an issue when fighting later bosses who have relatively high HP and can rejuvenate it. On one hand this keeps the battle intense because you can’t just dodge around forever, but considering I completed every side quest until Act 4 and everyone’s HP jumped drastically I suspected another reason. You earn money for every battle you win, and you can use it to purchase new weapons, armor, stakes, etc. But when you level up you earn Rubies and you can use these Rubies to purchase rarer items, and it’s the only way to purchase health items to continue a failed battle or a chronograph to extend time. There’s another way to acquire Rubies and that’s by purchasing them with cash. So you either have to know this ahead of time and just stock up on Rubies since the prices of these items are high in comparison to what you earn through leveling up, or you have to keep repeating earlier battles to keep leveling up and hope other players use you as well. You’re not forced to buy Rubies so you can still make progress but it lessens the experience when you have to spend time repeating the same battles to level up since you’re not strong enough. And considering the story gets really good at that point, some of the momentum is lost because it is a satisfying conclusion.

Bloodmasque is not only a very enjoyable iOS game but an enjoyable game in general. The action is intense and feels fresh throughout with the ability to move around, fight in a group, and since the controls are very responsive, you can time your moves precisely as opposed to screen mashing.  The story is entertaining and I found myself becoming more and more engrossed as the schemes of the vampires were revealed along with the attempts of the resistance to thwart them. And with the various missions, Bloodmasque does a great job of giving the player an understanding of life under the tyranny of the vampires and as a result makes sure the understanding of the goal of the resistance is never lost. Microtransactions aren’t required to finish the game but it did lessen the experience somewhat. However I highly recommend Bloodmasque because it doesn’t miss in its attempt to drive a stake home and provide an overall thrilling experience. 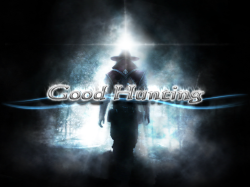