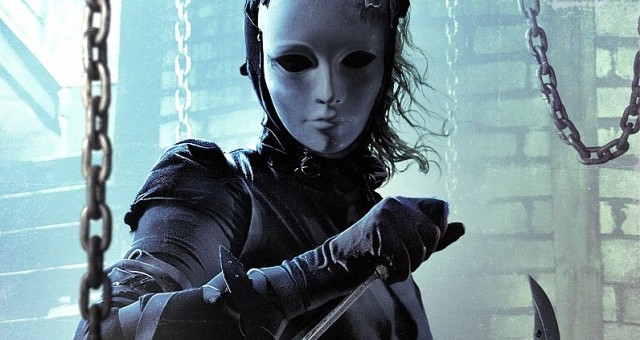 Blood Widow is an independent horror film produced by Arcani Pictures about a couple and their friends who get away for a weekend only to stumble upon what would become their worst nightmare. It opens up with a photographer sneaking into an abandoned house’s backyard while taking pictures of everything. He breaks into the cellar seeking anything he could find because apparently this house has a dark history, and finding a mask is the last thing he does as a person comes from behind and brutally murders him. This is the kind of history that was kept from Laurie and Hugh, the young, successful couple who just purchased the house next door, and who believe the biggest current issue they have to work out is Hugh inviting friends over without Laurie’s knowledge. Laurie believed this purchase was a step in the right direction to make their relationship stronger and more serious while Hugh thinks it’s a great opportunity for amazing parties. But the problem with that thinking is on full display when four of their closest friends arrive and decide they want to explore the surrounding area including the abandoned house next door. They stay for a while teasing each other and causing some slight damage to the house. But the damage to the house should be the least of their concerns because as a result they’ve been targeted by the sole resident, the Blood Widow, and she’s anything but forgiving.

Before I even read the synopsis for Blood Widow the image struck me hard and my thoughts were filled with the hope of a new horror icon emerging as a result of this movie. And it got right to business with photographer breaking into the house and being murdered, which also established the fact that there was a direct connection between the Blood Widow and that house that whoever intruded would be dealt with in a similar fashion. So when Laurie and Hugh arrived at the house next door and a party was announced it was pretty cliché but not necessarily a bad thing as it would give the Blood Widow more victims to terrorize, and hopefully in new ways. And that’s because the characters aside from Laurie and Hugh, because they were the main couple, had any unique attributes that would make them truly memorable. Harmony was the slightly mystical friend, Amber the party girl, Mark the somewhat jock, and Kenneth the awkward nerdy guy, and together they would invade the abandoned house and luckily make it out without encountering the Blood Widow at all. However this intrusion would serve as the catalyst for the Blood Widow to go after everyone in the house next door but it would take some time to get there. We would get a hint about the Blood Widow’s background as Laurie would find an old photo with an unhappy girl surrounded by adults, implying there would be more to be uncovered as events unfolded but the focus would shift to the party when even more people arrive, and in a way, back to Laurie and Hugh’s relationship. Another problem arises when Harmony sees Kenneth kissing on Amber at the party and decides to go back to the abandoned home alone and drink away her feelings of unrequited attraction. This, of course, results in Harmony being mercilessly killed by the Blood Widow, and this would be the start of her rampage.

At this point in the movie I was somewhat enjoying it and after the first killing I was hoping things would pick up. I wasn’t really feeling the lead up to and the actual party as I felt it dragged on considering there was no appearance or connection to the Blood Widow, and even though I didn’t have a problem with Laurie and Hugh’s relationship being the center of attention for some time it wasn’t particularly engrossing either. So the Blood Widow re-emerging only renewed my desire to know more and see more about this potential unique character. Some of her back story would be revealed, and it was haunting and showed a troubled soul. And the cold, calculated way she went about her murders without speaking made it necessary for her character and past to be elaborated on in other ways. And I would assume that the image of the Blood Widow elicited similar emotions in those behind the movie that it did for me, so I don’t understand why the focus wouldn’t be on developing her as a horror icon even further. There are only but so many ways characters can be murdered when there’s a limited budget but the spacing could’ve increased the suspense and tension throughout the entire movie and not just in a somewhat hurried fashion closer to the end. And considering the acting performances weren’t particularly strong, disguising that to some extent with a suspenseful atmosphere could’ve helped. However the potential in the character, and the most enjoyable part of the movie, is shown in connection with the strong acting performance by Danielle Lilley, who played Lauren, and there’s a very sharp contrast between her exhibiting fear and the others, and the performance was so convincing that even in my interview with her I had to inquire about how real some of these scenes were. And ultimately it’ll make you wish the focus was on these character-defining actions earlier instead of the other characters.

Blood Widow was an ok horror, slasher film but as a result of relegating its namesake character for the majority of the movie the potential to be an outstanding horror film was mostly squandered. The fact the silent character didn’t exist in the minds of others throughout the movie as something to explore or satisfy their curiosity made the first half feel unengaging, and didn’t give a context to the character. However when the Blood Widow was on the screen it was exciting, and even better with Lauren in those scenes or exploring her past as the frightening character from the images was on full display. If you’re truly looking for a new horror icon and have patience with its initial focus on secondary characters then I recommend Blood Widow because you’ll be left hoping to see more of the character in at least another installment.