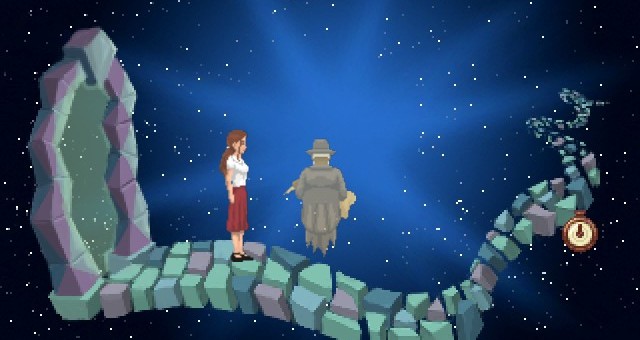 Blackwell Unbound is an indie adventure game developed by Wadjet Eye Games and is the 2nd game in the Blackwell series. It’s actually a prequel to the first game and features Joey with Rosa’s aunt, Lauren. It opens up with them arguing and Lauren is mad at Joey because of his reaction to a mishap during an investigation that left her soaked. If it wasn’t for the fact that Joey was dead and only Lauren can see him, they would sound like an old married couple. Lauren has fully embraced this life of being a spirit medium and she and Joey look for leads in the newspapers about possible paranormal activities and then go investigate. They’ve come up empty so far but there are two more leads to investigate and one doesn’t save the dead by slacking. There’s a possible haunting at a construction site, and another at the Roosevelt Island Promenade. And as luck would have it, both locations are haunted. The construction site by an older female ghost who believes she’s still in her apartment, and the Roosevelt Island Promenade by a saxophone playing ghost. It’s up to you to solve these two unrelated cases and help these ghosts move on so no one else gets hurt. Or are they somehow related? Either way these two cases will have ramifications that neither Lauren or Joey will be able to forget.

I enjoyed the first game in this series and I felt the history of Joey and the Blackwell family was more intriguing than just the individual case because the biggest question was what in the world happened to Rosa’s grandmother and especially her aunt, who seemingly embraced being a medium, if it wasn’t Joey who tormented them. And what would he be keeping secret? So I was excited at the prospect of this game revealing some of those things by it taking place before Rosa was even born. 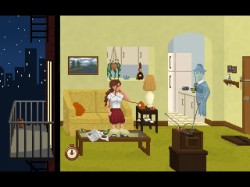 The controls are pretty much the same with the left mouse button used to interact with objects/people and the right mouse button used to look at items. To see your inventory you move your mouse cursor to the top of the screen. There is one big change: instead of control switching between Lauren and Joey automatically depending on the situation, you control when you switch characters. You can either do this by pressing the TAB button or clicking on either the L or J letters to switch. Of course this means that this game play mechanic would be used prominently in trying to solve puzzles and the good thing is it was done very well throughout the entire game. Joey and Lauren can’t do the same things with Joey being dead and all, so there’s your first clue as to which character to use in any given situation. Joey can float through walls, Lauren can’t. Joey can interact with ghosts, um..physic…directly interact with ghosts in ways Lauren can’t. However only Lauren can access her notes and as a result draw conclusions from them or create new questions. Also only Lauren can use items in the inventory.

You can choose which ghost you want to help first or even do both simultaneously. It’s entirely up to you. The 3 steps behind helping a ghost remain the same. First you have to identify the ghost by gathering information then help the ghost realize he/she is actually dead, and finally, use Joey’s tie to help them move on and into the light. Of course it’s not as easy as it sounds because not only do the ghosts refuse to believe they’re dead but those who are living and could help give you the information you need are themselves concealing the truth. Oh, and there’s some crazy lady that shows up at these locations mumbling something about helping people and asks if you can see them. With everything going on, this installment in the series made the first game feel like a tutorial in comparison and that’s a good thing. 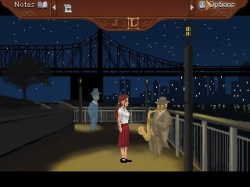 Blackwell Unbound gets much deeper in the mythos than the first Blackwell game and gives insight into the relationship between the medium (Lauren) and the spirit guide (Joey) and how it all works. The stories behind each ghost is more robust than in the first game and it’s tied more into NYC than the first game and uses real life figures such as Joseph Mitchell, a writer for the New Yorker, to weave a tremendous ghost story. The main antagonist in this one is also more haunting than in the first game because of the conviction of this antagonist. And finally Joey and Lauren are more fully realized with insight being given into Lauren’s mindset through her use of a dictaphone to record her dreams and the burden of being a spirit medium. The story this time around is even more gripping than the first and instead of just dealing with ghosts, Lauren’s life is actually put in danger.

This game takes place in 1973 so you don’t have a computer you use to research information so the phone book basically takes the role of the computer. You have to look up names in the phone book to either call someone or find an address. It felt like there was less going back and forth and part of that was probably due to there being two cases instead of one but it still felt slightly tedious. I don’t want to mention the use of other items because of their roles in solutions to some of the puzzles but I did enjoy how other items in the inventory had to be used to solve puzzles, which were slightly more challenging this time around.

Blackwell Unbound is an excellent sequel/prequel, which improves on the first one in just about every way. Being able to switch between Lauren and Joey manually allowed for deeper gameplay and more interesting puzzles. The connection between a medium and the spirit guide was explored more and it held up very well while also given a context to a new antagonist. The back story of the two ghosts were more developed and the connections between them and the living made for a very gripping tale. Joseph Mitchell became well-known in real life because of his articles about eccentrics in NYC or as one obituary put it, “a writer of surpassing tales that captured the unsung and unconventional life of New York and its denizens,” and that is played up in this game. I would say that Blackwell Unbound is Dave Gilbert’s “Joseph Mitchell moment” because he does an incredible job weaving together the lives and afterlives of the characters in this game and creates an indelible story. I might be late to the Blackwell series but if you’re later than I am I highly recommend it. 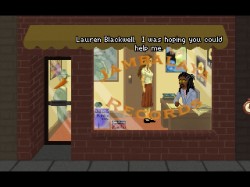