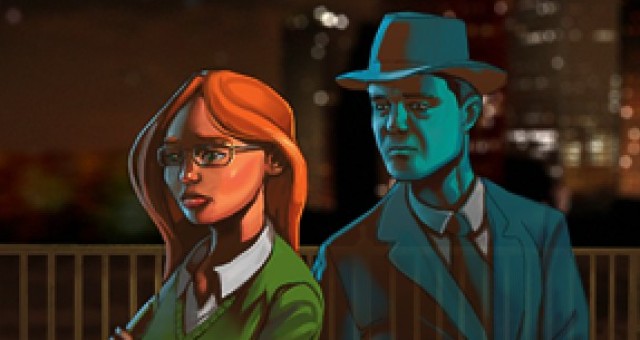 Blackwell Legacy is an indie adventure game developed by Wadjet Eye Games set in NYC and is the first of four games in the series . It opens up with Rosangela Blackwell releasing her aunt’s ashes on a pier in NYC and despite not knowing her aunt she says that this was the only family she had. Apparently her family has hereditary dementia, or at least that’s what the doctor who treated Rosa’s aunt tells her. He tells her that her aunt and her grandmother had a rare condition where both of them ended up in the hospital at a point in their lives and the only thing that helped them was for them to be sedated. When they weren’t sedated they would scream and be in so much pain, and the doctor and his staff found this to be extremely intriguing and so they monitored Rosa too in order to see if she would develop the condition her aunt and grandmother had. It wasn’t the pain that was intriguing but the fact that for 25 years they could never figure out what was wrong with them. It was as if they were haunted by something…or someone. And there was one peculiar detail that was shared by both and that was the name they both used to utter and that name was Joey. Now that her aunt has passed, is it Rosa’s turn to be inflicted with this terrible condition that forced two generations in her family to spend years in a mental hospital, or is there some other explanation, perhaps a solution, and therefore hope for Rosa? And who is Joey?

I love AAA titles but there’s a special place in my heart for indie adventure games. I got the entire Blackwell series at the same time and it’s interesting to see how the gameplay in the first one, which was released in 2006, holds up to the test of time. That’s a testament to the genre because of its focus on gameplay and storytelling but it’s also, obviously, the sign of a really good game. 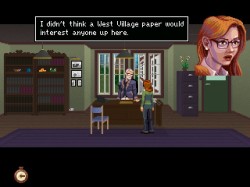 The controls are very simple with the left mouse button used to move your character, or interact with objects or other people. The right mouse button is used to view items and be given a description of it. Of course this applies to interacting with items in your inventory as well, and to view your inventory you just move the mouse cursor to the top of the screen. This is all demonstrated in a quick tutorial that has you interacting with a very annoying neighbor acting as a doorman and preventing you from getting into your apartment. Even though the neighbor was annoying, as far as smoothness of game play and voice acting, it was on point. You can choose how you respond to other characters with your response either being nice, rude or some other variation. You end up having to go find another neighbor who is currently in a park so this neighbor can vouch for you and prove you live there. Of course it’s not as simple as finding your neighbor because when you do she’s in the middle of an activity and Rosa’s social anxiety prevents her from just interrupting her neighbor. So the first real puzzle is to figure out how to get your neighbor’s attention so you can talk to her. To solve it requires some observation but I’m mentioning this because I appreciated the organic puzzles in this game. The solutions were practical so the illusion of the world this game was taking place in wasn’t broken.

After getting back into your apartment you can choose to go see your aunt’s doctor (or could have chosen it before) and hear the story about her condition. When you exit any area you’re brought to a map and can choose which location you want to go to, barring any parts you have to complete first, of course. It becomes apparent from talking to your neighbor, who senses that a headache you had temporarily might actually have spiritual origins, and from talking to your aunt’s doctor that things will be changing very soon. And sure enough, when you return once again to your apartment you collapse. Only to wake up and receive the answer to the question “who is Joey?” He’s a ghost, and is apparently the Blackwell legacy passed down from generation to generation and he has a message and a mission for Rosa. 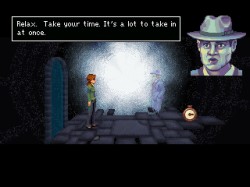 Rosa is a medium and so was her aunt and grandmother. Joey is her spirit guide and according to him it’s her responsibility to help other ghosts who are trapped in the world and can’t move on because they can’t accept the fact they’re dead. It’s a responsibility she can’t avoid and if she attempts to do so it’ll only be worse for her. So the gameplay is focused on the 3 steps that Rosa has to perform in order to help these ghosts. She and Joey have to identify who the ghost is, they have to get the ghost to realize he/she is dead, and they have to get the ghost to move on through the use of Joey’s tie and Rosa serving as a medium. The two have to work as a pair and you have to travel to different locations gathering information, questioning people, and interacting with a ghost, who just happens to be haunting the park you had to go to earlier to find your neighbor. I won’t give away the entire story but you’re tapped to be a reporter to go investigate a suicide at an NYU dorm and everything is connected. And the puzzles don’t just come from trying to find items but also by piecing together the information that is gathered. You have a notepad that is part of your inventory and when you get information from people or they answer your questions, your notepad is updated. You use the notepad to question people too and you can ask any person you interact with about anything listed in your notepad. Each piece of information you receive has a separate line in your notepad and one of the gameplay mechanics is to combine two lines of information to draw a conclusion or create a new line of questioning. It’s even possible to catch someone in a lie if you combine the right pieces of information. Just talking to people won’t give you all the information you need so you’ll be required to do some research on your computer at home to find out more about particular topics. I enjoyed the notepad feature and it was interesting to try to wheedle additional information from different characters or draw conclusions with the pieces of information. It was also cool to have to research some things on the internet and feel like it’s a real investigation, although it was a bit tedious to have to keep travelling back home in order to look up something and then go to another location or try another possible solution. 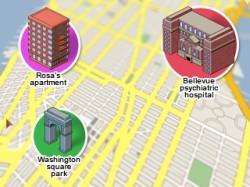 The story here is entertaining and there’s a mystery to unravel related to the suicide you’re investigating but I found the mystery behind the history of Joey’s interactions with Rosa’s aunt and grandmother more intriguing and this is something that I’m sure will span the entire series because Joey isn’t giving any answers in this one. And that’s fine because what is established in this one is a strong foundation for a series with Joey and Rosa dealing with the paranormal. The puzzles aren’t terribly difficult but the progress is rewarded with a really good introductory story.

Blackwell Legacy is an enjoyable adventure game and lays a good foundation for the Blackwell series. The story is suspenseful (and humorous at times) and I was fully engaged wondering what would happen next and complete with my own speculation. The game play mechanics fit with the investigative nature of the story very well and the paranormal elements are just an extension of that. It’ll only take about 2-3 hours to finish but it’s time well spent and I’m excited about getting deeper into the Blackwell history of paranormal activity or the next move Rosa and Joey have to make. If you enjoy adventure games and never played Blackwell Legacy I recommend that you do.