Blackwell Deception is the fourth entry in the Blackwell adventure game series developed by Wadjet Eye Games featuring the spirit medium, Rosangela Blackwell, and her ever-present companion, the ghost Joey. It opens up with Rosa receiving an inquiry on the internet about a haunted yacht and of course they comply and go investigate because it’s Rosa’s job now. When they arrive at the yacht and get on, it starts up by itself and sure enough it’s haunted with a ghost at the helm heading to who knows where. So as usual they get to work and discover the ghost is actually heading to Boston and every night he relives and attempted escape from the authorities for his role in a bank robbery. They manage to help him but ultimately Rosa has to jump from the yacht before it crashes and in a way she didn’t envision her night going. But things are just getting started and Rosa receives a phone call from an old friend/co-worker who wants her to come by because he’s on the verge of getting to the bottom of a huge story but he needs her help to finish it since he’s been feeling sick. However when Rosa arrives at his house it’s just his ghost there and he has no idea he’s dead. Can Rosa get to the bottom of how her friend died and save his spirit or will the story he was working on result in her being murdered next if she digs too deep? 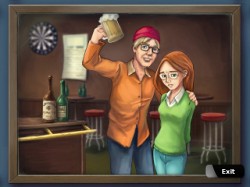 I’ve been enjoying the Blackwell series from the gameplay mechanics to the stories and its characters. I’ve also been enjoying the overall story arc and the mystery behind Joey’s connection to Rosa’s family and the dynamic between the hosts and the ghosts. And after Blackwell Convergence I was looking forward to playing Blackwell deception hoping for some answers to be given and/or an interesting twist that would keep me just as intrigued in the series. It got off to an interesting start, and even though the part on the yacht was more of a tutorial than anything, it was necessary to demonstrate the gameplay mechanics since there has been changes throughout the series. And Joey’s transformation into a complete playable character continues with him having his own inventory this time around. So his control scheme is just like Rosa’s now with the left click to interact with objects and the right-click to look at an object. The main difference is Joey can only interact with doors by passing through them with the left-click (but there’s great commentary if you try to directly interact with other objects). And his inventory consists only of a gust of wind, which can be used to affect physical objects, and his tie, which is used to help spirits pass on to the next world. It might seem like an unnecessary step to have to select the gust from the inventory but it allows for more challenging puzzles this time around. Switching between the two characters is still just the push of a button, and as usual Joey can go places Rosa can’t, just not too far, and solving puzzles requires the use of both of them in their respective ways. One major change, which I welcome with open arms, is Rosa now has a phone and can use that as a personal computer so it’s no longer necessary to travel back and forth between Rosa’s home to look up people or places since this serves as that device. And considering it’s necessary to travel often to see if you missed a piece of a puzzle this is a huge relief. And combining notes, the ability to draw a deduction from separate pieces of information, is back and that’s a huge plus. 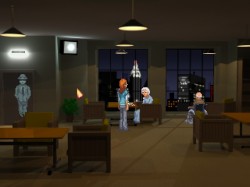 The story this time around has Rosa following up on the leads of her old friend, Jeremy, who was pursuing what he believed to be a dangerous scam. As is the case with every ghost Rosa and Joey encounter, he doesn’t know he’s dead and therefore doesn’t recall his last actions and moments, and just believes he’s been out sick. So Rosa and Joey go to his job to investigate and retrieve a notebook he asked for but the receptionist doesn’t even know he’s dead. Of course it’s easy to get inside with Joey and figure out where Jeremy last went, which was a park, and the murder is so fresh that the detective is still on the scene and the body hasn’t been identified yet. This leads to a new character being introduced, Detective Durkin, who plays an ongoing role throughout this game. So the hunt is on to identify the person that Jeremy met at this park and it starts with the person who Jeremy last interviewed and arranged the connection. The story started off as very intriguing and the mystery only deepened when the first person who you’re required to interrogate in a nursing home hints at a cult and a mysterious figure who is able to manipulate others into giving him various belongings as well as fundamentally change individuals. And the story has personal aspects for Joey because a man is not only able to see Joey but knows him and calls him by name. And Joey’s anger and refusal to talk about it with Rosa continues his story arc and a few revelations about his past. Dave Gilbert does a great job in weaving together a tale that requires Rosa and Joey to investigate the mysterious deaths of a number of people while connecting it to Joey’s past and resulting in some great character and story developments. And even though the story requires you to also travel back and forth to different locations it’s much better this time around because it’s not to look up information but to interact with other characters or solve puzzles. 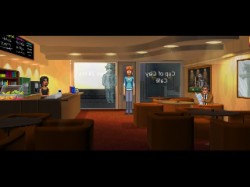 Aside from a couple of puzzles such as the one at the start of the game on the boat, the puzzles are very logical and serves as a means to continue the excellent social commentary that has been present throughout the series. Whether it’s connecting with one who created an image just to appear popular or Rosa and Joey interacting with a “psychic,” the story remains personal while creating an atmosphere of suspense that never becomes tedious. So I found myself becoming more engrossed in the story as it unfolded and there were plenty of moments that left me either with my mouth open or excited about the direction the story took. But where it succeeds in the story in terms of the ghosts in this episode it raises a lot more questions regarding the overarching story and gives very little in terms of answers and it could be either good or bad for the next installment. I won’t give away any spoilers, however one of the main mysteries in this series is the connection between Joey and the Blackwell family and that’s still not fully addressed. And the new elements introduced here, even though they’re very interesting, make it seem less likely that answer will take center stage at some point. But the stakes are raised this episode with a shady organization and one thing that’s clear is things won’t ever be the same for Rosa and Joey as the connection between medium and spirit guide is tested unlike ever before.

The Blackwell Deception is an excellent episode that effectively raises the stakes and makes the world of spirit medium and guide that much more entertaining. The personal touch in dealing with ghosts isn’t lost this episode either although the original premise of the series in terms of the connection between Joey and the Blackwell family seems to hold less meaning as a result of some of the revelations. The new yet simple gameplay mechanics make the flow of the game easier and I can’t stress how much of a difference that makes when some puzzles require traveling back and forth between locations. And I’m looking forward to, and have confidence in, the conclusion of this series and what’s in store for Rosa and Joey.