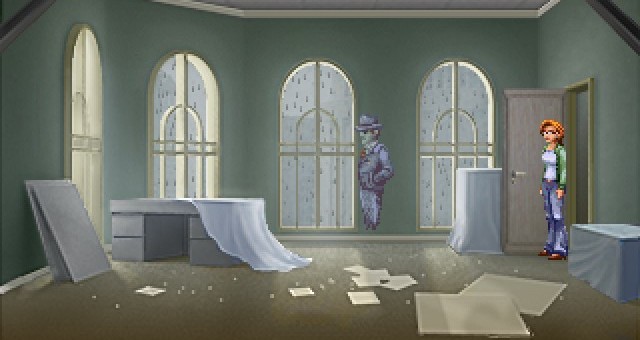 Blackwell Convergence is the third entry in the Blackwell adventure game series developed by Wadjet Eye Games. The series returns to modern times with Rosa and Joey, and picks up some time after Blackwell Legacy. It opens up with Rosa and Joey trying to help a ghost, who of course doesn’t know he’s dead, and is standing on the ledge of an office building threatening to jump. Yes, a ghost is threatening to commit suicide. Of course just telling him he’s dead doesn’t do anything so it’s up to Joey and Rosa to help him move on. Apparently he was a successful business owner who lost everything in a fire. And to make matters worse his wife wanted a divorce because of that, and he couldn’t get any financial help from friends or banks. After numerous attempts to get him to stay off the ledge permanently, Rosa is successful in getting the ghost to stand up for himself and become determined to start over because if he could build this successful business from scratch then he could definitely do it again. The only thing is, and he finally realizes it, is that he’s now dead and it’s too late. He remembers that he slipped while on the ledge and fell to his death. They’re able to help him move on and head into the light, and it’s just another day for Rosa and Joey, the ghostbusting duo. They seem to have it all figured out and life is grand but they would soon be led to a more difficult case that will change everything, and forces them to confront an old enemy once again.

One thing about playing games in a series back to back is being able to see the progression of the overall story and characters much better, as well as being able to compare the evolution of the gameplay easier because it’s fresh in your mind. Such is the case for me with the Blackwell games. As I wrote in my review for Blackwell Unbound, the 2nd game in the series, I felt it improved on the first one in just about every way. 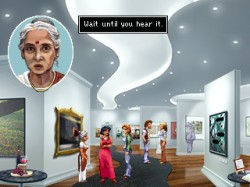 The controls in Blackwell Convergence are the same as that game with the left mouse button to interact with objects/people, right mouse button to view objects, and you can switch between Joey and Rosa at will. And Joey’s actions are more defined too because clicking on an object or person as Joey will have him blow on it and create a gust of wind. This was improved but the notes system has taken a step back, and lines of information listed in Rosa’s notes are only descriptive and not interactive. So you can’t combine two lines of information to draw a conclusion or new questions you can use, you can only view a description of each line of information. It’s not necessarily a handicap because the gameplay shifts to reflect that but I preferred the interactive notes. And since it’s modern times, the computer is back instead of the phonebook but the computer is used here for more than just looking up names and getting addresses. And you also have an email system that you’ll have to use in…well, I can’t elaborate on that here (spoilers) but the computer is more useful this time around.

The story this time around starts when Rosa is invited to an art gallery opening and is introduced by her neighbor, Nishanti, to Monique, the owner of CubeStar Films, who has a ghost story to tell. After making arrangements to speak to her privately, Monique tells her about the lead actor having a heart attack and dying during the final scene, and that was a huge reason for the film’s success and as a result, the growth of CubeStar Films. But whenever she jogs at this park she feels it’s haunted by him. Of course it is, and it seems simple enough: another ghost not knowing he died and continuously acting out the final scene of the movie. However it’s anything but simple, as the mystery will involve not just a film studio but an art gallery, a shady investment firm and an old enemy. 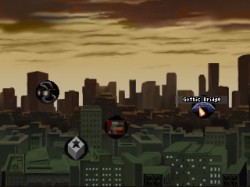 The progression of the story was handled very well here and as a result the puzzles didn’t feel repetitive. And the advantages of having Joey around to acquire information is highlighted more this time around. The dialogue was great and staying true to NYC history once again, the story of Joe Gould has a role in this one. The connections make sense for the most part but part of the explanation towards the end doesn’t fit completely and I can attribute that to the fact that even though this entry in the series gets even deeper into the mythos, there are still some things that Joey and Rosa don’t understand and will be further explained in the next entry. However the mystery and suspense is still satisfying and there was definitely a “whoa, hold up” moment at one of the twists and I mean that in a good way. The lives of the characters and ghosts encountered in this one didn’t come off as memorable as those in the prior entry but I feel some of that was intentional because of the direction the story took and where it could be leading. However clearer answers are given as to Rosa’s family history and it connects nicely with what was established in the previous 2 games.

Blackwell Convergence is a great third installment in the series and it didn’t have to exceed Blackwell Unbound as much as continue to build on the foundation it laid, and Convergence succeeds in that. Even though I preferred the interactive notes over the descriptive notes in this entry, the gameplay and story adjusts for that, and overall the story is just as gripping as the last one. It gets deeper into the relationship between mediums, spirit guides and ghosts, and provides some answers while furthering the mystery and setting others up to be answered in the next installment (hopefully). Overall the Blackwell series has kept me engrossed and it’s been a breeze to play. I’m definitely looking forward to playing the next entry and I still recommend these games because even after 3 entries into the series it’s still refreshing to play.