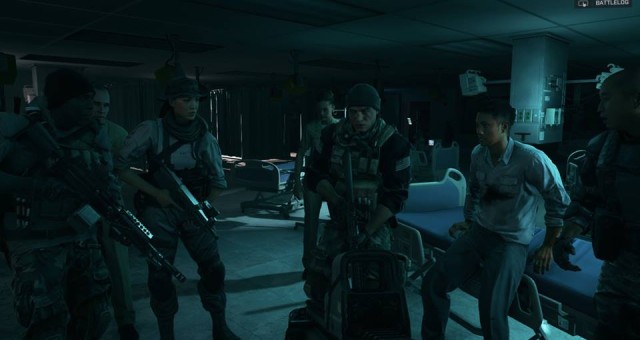 Battlefield 4 is a first-person shooter developed by DICE and is set 6 years after the events in Battlefield 3. It opens up in Azerbaijan with 4 soldiers, the Tombstone Squad, trapped underwater in an SUV after securing vital intelligence. However the squad leader, Ssgt. William Dunn, is trapped in his seat so if the windows are smashed the others could escape but they would have to leave Dunn behind. No one wants to do it so Dunn gives you, Sgt. Recker, his pistol and commands you to shoot out the windows so the remaining squad can escape with the intel. And when that happens everything comes rushing in including the flashback of the original objective of the mission, which started 13 hours earlier. Tombstone was sent in to locate and engage Russian special forces in order to retrieve intel that reveals that Admiral Chang was planning a coup d’etat by assassinating Chinese presidential candidate Jin Jie and then blaming it on the U.S. so Chinese citizens would direct their anger there. And the other purpose for the coup d’etat would be to gain Russia’s full support following the events of Battlefield 3 so retrieving this intel is crucial to preventing all-out war. But when Recker and his squad are sent out on another mission to rescue some VIPs in Shanghai they’re right back in the thick of things as the situation in China deteriorates, and they discover the VIPs they were sent to rescue weren’t so helpless. But who are they really, and could they possibly hold the key to preventing another all-out war?

I don’t usually place a high priority on the campaign mode in any Battlefield game but I wanted the experience of playing it and also to get a taste of how it would be on the next-gen systems. It started out simple enough but was still intense with the opening scene underwater being playable and then jumping immediately to the events that led to this. And initially it starts off with close quarters combat as you have to make your way through corridors in order to get to the spot where you ambush some enemies setting the stage for some exciting gun battles. You can direct your squadmates to engage specific targets and when you have air or ground support you can direct them as well. This is effective early on and works very well but later in the campaign mode your squadmates aren’t as effective and at times the most you can do is hope they temporarily distract the enemies shooting at you. You also receive a tactical visor which allows you to mark your enemies and plan your point of attack instead of just running into a situation with guns blazing. So I was really into this mission and pleasantly surprised at how much I was enjoying it from the air and ground support to the environment and weapons. And the action sequences flowed wonderfully so one moment you could be running from an attack helicopter trying to avoid its fire and the next the building could be crumbling as part of a cutscene. And even the SUV that ends up submerged in water you have to drive yourself while avoiding pursuers in an attack helicopter. And the second mission was enjoyable as well and even though it was relatively close quarters it did give the option on how to approach situations, and the fact it took place in Shanghai gave it some life as the impact on civilians was evident. So it had the solid gameplay, electrifying action sequences and cutscenes, and it clearly showed the effects of this devastating combat on the civilian population so it didn’t feel too over the top.

But then something happened while wandering on the USS Valkyrie and it felt like it came straight out of an episode of the X-Files, and it became indicative of the campaign from this point on in some ways. I cut through a briefing room to get to where I needed to be and everyone in the room looked EXACTLY the same. And I don’t mean you had to look closely to notice because of different hair, etc. but exactly the same.

It was disappointing to see this especially on a next-gen console and it was surreal walking around the Valkyrie after seeing this. This would be repeated in other ways as some of the action sequences would start to resemble each other, and it seems like a common theme in too many FPS where the protagonist continuously gets knocked out throughout the campaign. And even though the acting was solid it didn’t  matter with the script and it seemed like Irish was not only meant to be the most talkative character in every scene but make very little sense. One mission he doesn’t trust the commanding officer just because and the next mission he doesn’t trust Hannah, one of the VIPs rescued, because she’s not the commanding officer. So it was just dysfunction all over and it didn’t help that the protagonist had zero presence as a leader or character. And even more baffling than that was the decision to not highlight any air combat or the strongest aspects of the multiplayer gameplay at all in the campaign mode and what makes Battlefield a unique experience. Of course I didn’t get Battlefield 4 for the single player campaign but after experiencing it I could’ve passed it completely, as it won’t even help someone practice using vehicles that are prevalent in multiplayer.

The multiplayer mode is why I purchase a Battlefield game and I’m sure that’s why everyone else does too. And before I get into it I have to mention the issues early on that made the game unplayable even though it’s been patched and the issues are few and far between. The servers were horrible for months, and it was so commonplace that your character running in place when attempting to sprint could’ve been considered a gameplay mechanic. This was very frustrating and for one who loves the Battlefield series I was extremely disappointed I couldn’t play for weeks until it was fixed. It doesn’t matter how many features a game has if it’s unplayable. So how is the multiplayer when it works? It’s glorious. If you’re familiar with the Battlefield series and enjoyed it previously you will love the multiplayer here as it’s very addictive. If you’re new to the Battlefield series then you’re in for a treat as it’s unlike anything else with its combination of groundshaking action, stunning visuals and riveting audio andthe experience will leave you in awe.

There are 4 soldier kits: Assault, Engineer, Recon, and Support. Each one of course plays differently and unlocks different weapons, attachments and accessories. The assault class is just as it sounds as it provides you with the weapons and tools needed to lead the charge, including a defibrilator that allows you to revive allies who have recently died. The Engineer kit is most adept at tanking out enemy vehicles whether through rocket-propelled projectiles or land mines and also comes equipped with a repair tool to repair your team’s vehicles. The Recon kit wasn’t in Battlefield 3 but returns here and has everything needed to detect enemy soldiers and their movements, can move around undetected, and can adjust scopes on rifles. And last, but not least, is the Support kit which excels at providing cover for all other kits by supplying ammo, health kits, cover fire and suppression bonuses. You can switch between kits/classes at will during a match and all of them contribute to the XP for your overall level. However using each kit unlocks different weapons and accessories while using specific weapons unlock different attachments, etc. for that particular weapon. You also receive battlepacks when you reach certain levels and they contain all types of perks including double XP bonuses. And you’ll need all of these as there are 10 maps (more with DLC) that vary based on the mode you’re playing and there are over 8 multiplayer modes. Team Deathmatch is of course available and this mode uses only a portion of each of the 10 maps as it’s focused on close quarters combat and no vehicles can be used. This mode is also best for unlocking weapon attachments since you’ll have more opportunities to kill enemies with these weapons and level them up. Environments are multi-leveled and completely destructible. So if you can’t get past a sniper that has picked the perfect spot on  a building and you don’t know how to climb up that building, just blow up the building and watch it crumble beneath that sniper. So the environment, or battlefield, changes based on the events in that match.  And the maps are well-designed so not only are they fun to play but there’s no overwhelming advantage for any particular kit/class.

But if you’re just playing Team Deathmatch then you’re missing out on the true Battlefield experience and that’s no exaggeration. There’s nothing like lining up your shot only to have it thrown completely off from the ground shaking because a tank explodes next to you, or a jet just let off a barrage of missiles and the sound leaves you momentarily disoriented.  Or a change in the weather flooding an area or making it hard for some vehicles to navigate in the waters creates an even more immersive experience. And it’s not just sheer action as it’s essential to play as a team in these modes in order to win and there are plenty of features to make strategy a huge part of the gameplay if you so desire. That starts with the different kits/classes and when there’s up to 64 players and over 50 vehicles this is unlike anything else. Even something as simple as being able to mark enemy players and vehicles goes a long way in teamwork. There is a Test Range so you can actually improve your skills using the vehicles but once you get the hang of it there are so many different things you can do in one match you’ll be completely engrossed in the experience.

Battlefield 4 is an extremely satisfying experience despite it’s unjustifiable launch problems and lackluster campaign. The multiplayer, the core of the Battlefield series, is as addictive as ever with it’s enjoyable maps, modes and numerous vehicles, weapons and useful items to unlock. I don’t know why there’s such a huge gap between the gameplay in the campaign and the multiplayer but I’m glad the multiplayer is as robust as it is and it’s not disappointing in the least. The new vehicles, new multiplayer modes and bringing back the Recon kit/class are all welcome additions. However I do have to still point to the horrible server issues early on because that was part of the gaming experience and I hope moving forward there won’t be any launches that have this problem on this level. Despite that I highly recommend Battlefield 4 to satisfy all your combat multiplayer needs.