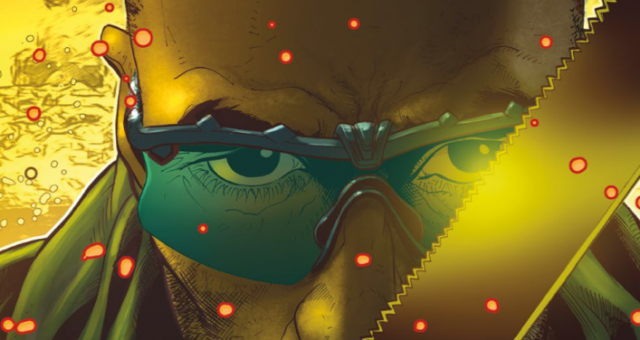 Bankshot #1 is the start of a new series written by Alex De Campi and published by Dark Horse Comics. It follows the story of Marcus King, a man of many talents wanted by all law enforcement agencies. This issue opens up at FBI headquarters in Washington, D.C. where a Mr. Gault is being questioned about an operation he sanctioned. He had his agents attempt to detain one of Marcus King’s associates but it ended in disaster in NYC. And as a result, Marcus King paid a personal visit to all the heads in their personal homes to threaten them against taking further action.

There was a time when Marcus King was a soldier on a mission in North Africa. The mission was to capture the dictator of the country during his attempt to flee. When his unit spots a convoy they head to cut it off only to be ambushed. Marcus is the only one left alive but there’s more to this mission than even he suspected. What occurred all these years ago in North Africa to set Marcus on the path to become the man he is? 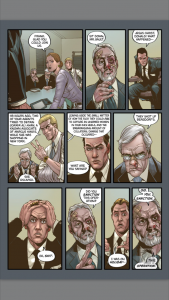 It’s rare when an opening sequence can create an impressive mystique for a character without the character making an appearance but this issue pulls it off. It wasn’t just the fear in Mr. Gault’s superiors that made Marcus King impressive. It was the capabilities of his associate, his ability to not only know the locations of their homes but send a message that was even more powerful than their collective thirst for revenge. If real G’s move in silence it’s because they’re trying to emulate Marcus King. And I was intrigued.

Even though I wanted to see more about Marcus King in the present, the flashbacks worked to an extent. The action was fast paced. At times I had to reread a few panels just to get a grasp on what was happening to what side. It was entertaining, although I initially felt there was such a wide gap between past and present Marcus for the flashback to give more insight into the current situation. However, when the story progressed I was satisfied with the way this was beginning to connect with Marcus King’s current goals. 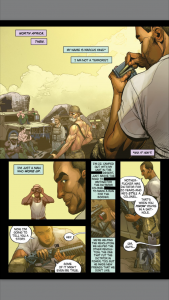 The third part of this issue really excelled. A definitive answer wasn’t given to the question of whether or not Marcus King was a terrorist. That was partly due to his motivations not being examined. A glimpse was given inside his organization. I won’t give anything away but I will say this issue does a great job in creating an interesting setup for a story arc. The stakes are personal enough to add an additional edge to the situation. But it still fits into his overall goals so the character can still be explored at his best. I can’t wait to see more.

Bankshot #1 is an intriguing start to the series with mostly effective flashbacks and entertaining action. The opening sequence works beautifully in the way it establishes him as a formidable character. It’s easy to get excited about a shiny new character, but the way Marcus King’s world is set up I have hope that the story will be enjoyable throughout. Looking forward to the next issue.