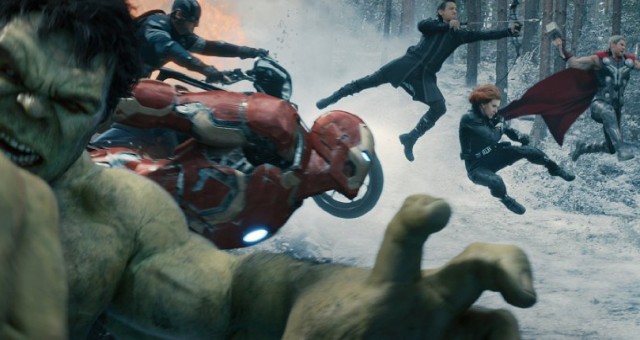 Avengers: Age of Ultron is a superhero movie produced by Marvel Studios and has the team reuniting to prevent Ultron, an artificial intelligence, from unleashing a global catastrophe. It opens up with the team advancing on one of Hydra’s strongholds after solid intelligence indicated that Loki’s sceptre was being kept there and used for experiments. Hydra’s forces are no match for the Avengers so instead of just standing their ground they come up with a plan to escape using the twins, Wanda and Pietro Maximoff, while allowing the Avengers to ultimately take the sceptre. The Avengers are initially shocked at the twins powers as they give the team some problems. But it’s all a ruse as Scarlet Witch lies in wait for Tony Stark and manipulates his mind so he sees his worst fears in a vision while reaching for the sceptre. He sees all the Avengers dead with him as the only survivor, and this haunts him even after the mission. Using Hydra’s advancement in creating artificial intelligence with the sceptre, Tony persuades Bruce Banner to help him continue this work with one goal in mind: To create a global defense force called Ultron with his armors being the first responders. This way the Avengers could be disbanded and enjoy their time instead of responding to the biggest threats. But what is the secret behind Loki’s sceptre? And could the Avengers respond to a threat that was designed to replace them? 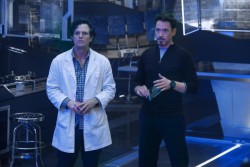 If you saw the last few episodes of Agents of S.H.I.E.L.D. (which has been excellent this season) then you saw how the ending tied into the start of Avengers: Age of Ultron with the team being assembled to attack Hydra’s base in Sokovia. Doctor List, the scientist working with Baron Wolfgang von Strucker, made appearances in the last few episodes. You don’t need to watch that Agents of S.H.I.E.L.D. episode to understand the start of this movie but it helps create a more engrossing experience as a reward for those who do watch it. I’m one who appreciates the fact that it’s all connected, even in a small way, and Avengers: Age of Ultron definitely benefits and builds on the original movie. So the original movie holds a special place in my heart because of the way it initially brought the team together and was a great payoff for the individual movies. And Banner transforming into Hulk towards the end of the movie is still one of my favorite moments ever in a movie. However, AoU overall exceeded the first one but wouldn’t have been able to be as good without the first one. And with the full slate of Marvel movies for the next few years already announced, it might seem easy to overlook certain developments in this one by just making assumptions about what’s in the next movies. So AoU had better character development, action and story. The tone was set at the very beginning with the team storming the base, and it was clear that a lot changed since the events in Manhattan. The Avengers worked better together as a team, they had a focus, and the relationship between Hulk and Black Widow was so much more with her being the only one who could get him to transform back to Banner without incident. And the fact that the twins volunteered for Hydra’s experiments instead of being forced into them made the storyline more intriguing. 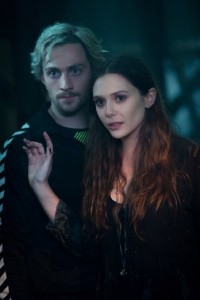 After that intense and intriguing opening I was hyped for what was to come. And the tone was definitely more mature and darker than the first one. And this was followed by solid character development, and not just from the standpoint of trying to figure out what the villains were trying to do but their own motivations and additional backstory. So Ultron was born out of Tony Stark’s desire to want the world to be safe with an iron suit and use the artificial intelligence to complete his global defense program with Banner’s help. There was humor at various points throughout the movie but the character development and story progression were driven by significant events. The fact that Stark and Banner kept this work from the rest of the team set the stage for Ultron’s appearance to rattle the team and set up an interesting dynamic between them. Yes, fans who already know of Marvel’s Civil War is about can see the seeds being planted and the growth in characters but it still has to make sense in the cinematic universe and can’t just appear out of thin air. And I appreciated how certain aspects of that progression were done subtly. Scarlet Witch’s power was also a vehicle for character development for other characters leading to significant revelations, with Black Widow’s backstory as an example. This time around she was a fully-realized character with her own history, and an organic love story with Banner/Hulk. EVERY single character has had a love interest as a motivating force at some point in Marvel’s cinematic universe so I saw no problem with her having the same. And she felt more human with a history reflective of her experience and talents, and not a caricature of perfection and isolation.

And of course, the action this time around blew away the action in the first one. There were many more opportunities for action, and this wasn’t only due to Ultron having a plan that was more action-oriented and required him to interact with more people but Scarlet Witch and Quicksilver helping him made for intense and enjoyable battles. To see Quicksilver racing from Avenger to Avenger landing a flurry of blows while Scarlet Witch distracted the mind or caused chaos, or to see the different manifestations of Ultron’s body taking on the Avengers. It wouldn’t be accurate to just compare Ultron to Loki as a villain because their goals were completely different and Ultron had help.  I won’t give any spoilers but even the Vision was done right with his own exciting moments. And I can’t say enough about the earth shattering scenes with the Hulk and Tony’s Hulkbuster armor. There were many easter eggs throughout this movie however the best part about them was they weren’t just done as fan service for those who would catch the references but an integral part of the story. Hulkbuster armor just for the hell of it? No, it made perfect sense in the story. It’s beautiful to see the Avengers effectively brought to life with a coherent story and as part of the greater Marvel Universe. So a reference to Wakanda? No, not just a simple nod but a part of the story that made sense while also knowing that Black Panther will be making his appearance in the movies soon. The fight for and use of Vibranium was just one of the many aspects of this story that made it more enjoyable this time around. And the ending raised the bar for all future installments.

Avengers: Age of Ultron is a highly-entertaining movie that surpasses the original in just about every aspect. Ultron as a villain is imposing but doesn’t have to carry the weight as the only villain as Scartlet and Quicksilver hold their own in their respective roles. And the character development is on point with plenty of backstory, progression, and even some humor so even if you have a favorite Avenger you won’t feel as if they don’t get enough attention in the story. And the action was epic, and what I hoped it would be with Earth’s Mightiest Team having to rise to the occasion once again. I’m just glad it had a lot to sink my teeth into while I wait for the next installment.