Armor Hunters #3 continues with soldiers inside M.E.R.O. battling against Lilt, an armor hunter, to stop him from reaching the infected Malgam. But they’re not faring well as their weapons can’t harm him nor are they equipped to defend against his acid attacks. The colonel knows the station is all but lost and is planning to evacuate with the remaining soldiers including Bloodshot. But he informs the colonel that he’ll cover her escape because he’s not leaving, and proceeds to attack Lilt head on causing damage to the monster. The colonel doesn’t hesitate to take advantage of this opportunity as she gets the remaining troops to fall back. However they’re not completely defenseless as they make their escape in a heavily-armed alien vessel they’ve dubbed the Love Boat, piloted by Liveware, and they head towards Western Nebraska to rendezvous with Aric. Unfortunately losses abound and Aric is adamant that the armor isn’t worth all this bloodshed, and he wants to surrender it to the armor hunters. And it’s not just them, countries all over the planet have suffered tremendous losses with no answer on how to stop the hunters. The colonel finally accepts Aric’s decision to surrender the armor but she states that handing it over to the armor hunters has to be under her terms. But does she have one final trick up her sleeve to turn the tide of battle or is this truly the end of X-O Manowar? And with Malgam on the loose now will surrendering the armor even stop the hunters? 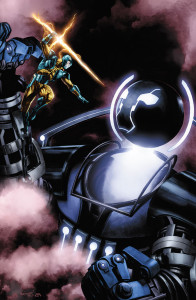 I’ve been loving this series, and as an introduction to Valiant comics I’ve been amazed at the quality for a crossover event. The build up has been perfect but there’s also been plenty of activity, character development, and story progression throughout. So my anticipation for this issue was through the roof, and that only increased at the start of this issue when I saw Bloodshot spring into action. It was clear that the soldiers wouldn’t stand a chance against Lilt so the retreat and regrouping in Western Nebraska made perfect sense. And it was done in impressive fashion with the Love Boat. Aric would reiterate his desire to surrender and if not for the colonel stating that she had a plan then this would frustrate me. It’s not because his sentiment wasn’t perfectly understandable but the fact that more than halfway through the event there hasn’t been a confrontation between the major players. Even Primary Reebo’s mentality was wearing on me since it’s been revealed he started as an armor hunter at the same time as the rest of his current team, and even though he would have an added burden as a leader, no additional information has been given about his extra weariness. However this plan was intriguing, and would lead to one of the most spectacular, if not the most spectacular, sequence in this series. Just when I felt that this issue might stall without any major developments this sequence made me extremely excited again. And the artwork by Doug Braithwaite really shines through here, and it’s easy to take it for granted because it’s been so consistently good but in an electrifying sequence like this it really helps you feel what’s taking place. Without giving away any spoilers I’ll just say I’m not entirely sure why this armor is so different from the ones the hunters have previously encountered nor do I know if it’s been answered in previous X-O Manowar issues but at least a limited answer is given here and it was suffice for what took place and maybe that will be expounded on later. And plenty happened in this issue after this sequence leading to a stunning ending and setting up what could potentially be an amazing battle next issue. And even though my anticipation for next issue is still through the roof I do have a few concerns because it is the last issue in this crossover event. The other series have done an excellent job in filling in backstories and what’s occurring elsewhere but it seems as if the ending next issue might feel abrupt and leave too much unresolved or the entire issue could feel rushed to make as much occur as possible. However if there’s one thing this series has done for me is it has inspired me to have confidence in Robert Venditti’s ability to write engrossing stories that captivate the mind and leave one feeling satisfied.

Armor Hunters #3 is an excellent penultimate issue that raises the bar with its amazing sequence that results in multiple surprises, and sets the stage for an earth shattering showdown. Aside from unexplained behavior by Primary Reebo in the middle of this issue, you’ll be on edge from beginning to end as everything from the artwork to the dialogue will keep you engrossed and anticipating what could happen next. I do wonder how everything could be wrapped up in one issue especially with Malgam on the loose but I have confidence that it will be an exciting and satisfactory conclusion.