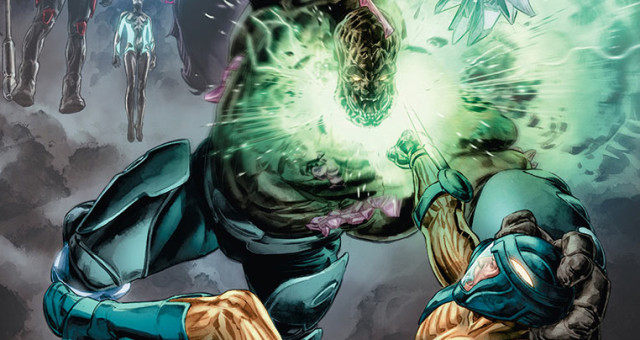 Armor Hunters #2 continues after the shocking destruction of Mexico City by the alien armor hunters, who will stop at nothing to destroy the armor. It’s horrifying that Mexico City looks like a graveyard as no structure was left standing and an estimated 20 million are believed to be dead as a result. But the armor hunters don’t see it that way as they’re only giving a moment for the governments of the world to see things their way and hand over the armor. Of course this infuriates Aric who wants to take them head on but Colonel Capshaw knows that wouldn’t be the wisest decision, and even though she shows restraint in front of the others she doesn’t do so privately before taking a call from the Secretary of State. They both agree that the plan should be to make the armor hunters come after Aric as opposed to him attacking them and practically handing it over to them. However Primary Reebo warns them of another threat posed by the armor, and that’s the fact that everyone exposed to the armor is in danger of catching a mysterious plague. Tired of waiting, Reebo orders an assault on 8 locations but it’s not just Aric that he has to worry about because there are others capable of putting up a fight, and they’re all onboard to defend the planet. 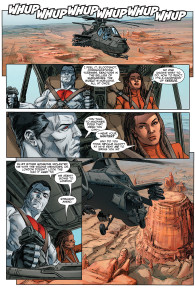 I loved the start to this series, and considering it was also my introduction to the majority of the characters I felt very invested in their situations. And the stunning conclusion with the destruction of Mexico City forced me to pick my jaw off the floor slowly, and I couldn’t wait to get my hands on this issue. And the start of this issue pulled me right back into it with its brief yet powerful showing of the aftermath of the blast in Mexico City with a wife crying over her dead husband and then Primary Reebo re-establishing communication with the firm belief that the armor has to be wiped out at all costs because it can do even worse. Aric and the Colonel’s response highlighted the impact of the blast excellently but it’s still slightly perplexing why Reebo doesn’t give them the answers they seek since it would be very easy technologically to show them what the armor has done. Yes, his weariness, as well as those with him, from hunting armors for so long definitely plays a role in that and it also helps advance the story and the second phase of their attack. And since some of the other armor hunters check his decisions I believe this will be addressed more directly at some point. And since I don’t have references to other enemies to use to compare the vicious beasts that would be sent to Earth to kill everyone in the area I was really impressed by this and got to see something I wanted to see in the last issue, and that was the armor in action. And there’s plenty of action in this issue, and Robert Venditti’s ability to put so much in one issue without it feeling rushed or half-baked is incredible as the story feels so much longer than 25 pages, and I mean that in the best way. There is absolutely no filler in this beautifully drawn event. And the inclusion of the armor as a virus and affecting others was brilliant, and the demonstration of that raised the stakes extremely high, and posed its own dilemma to Earth’s defenders. This isn’t the classic black and white stop the alien invaders story because what they’re trying to destroy, the armor, is indeed as dangerous to the Earth and other planets and that’s becoming more apparent. 2 issues in and I’m completely loving this series.

Armor Hunters #2 is an incredible issue that makes this series even more engrossing as there’s plenty of character development and action as the story progresses perfectly with zero filler. I wondered how the first issue could be topped but Robert Venditti definitely pulls it off, and Doug Braithwaite’s artwork captures every moment and emotion in the necessary fashion to keep you mesmerized throughout. Valiant stated that this crossover event would be a must-read, and I agree with that statement completely.