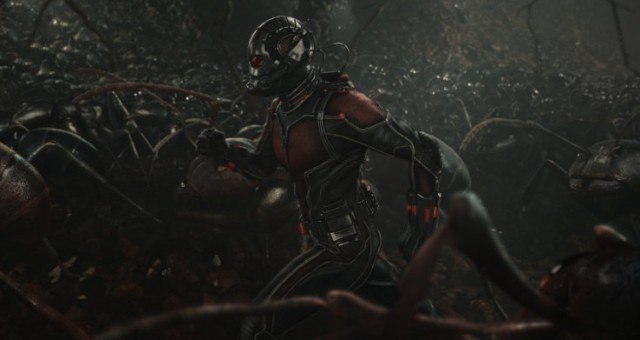 Ant-Man is a superhero movie based on the comic book character and produced by Marvel Studios. It opens up in 1989 with a furious Henry Pym barging into a S.H.I.E.L.D. meeting after discovering the attempts which were made to replicate his technology. He was able to create the Pym Particle, which allows him to shrink himself and all types of matter but keeps it under tight control and is the only one who uses the technology. Pym believes the particle is dangerous because of all it can be used to do, and knowing S.H.I.E.L.D. would want it in order to create an army of microscopic soldiers he wants to make sure it doesn’t fall into the wrong hands. So he resigns immediately from S.H.I.E.L.D. and takes all of his research with him. Fast forward to the present day and Dr. Pym is faced with a similar decision as he learns through his estranged daughter, Hope van Dyne, that his protégé, Darren Cross, is on the verge of recreating this particle and labeling it the Cross Particle. And he intends to sell it to the highest bidder for military use. The plan is a covert operation to enter Pym Technologies and destroy the Cross particle and all the research but they need someone capable of executing a heist since Dr. Pym can no longer wear the suit. Enter Scott Lang, a former systems engineer just getting out of prison for committing an elaborate corporate heist years ago. He finds that it’s not so easy to get his life together and get a second chance especially considering that he wants to do right by his daughter but isn’t even allowed to spend significant time with her until he does. And Dr. Pym has been watching him for some time but is Scott the right man for the job or is it too late to stop Cross? 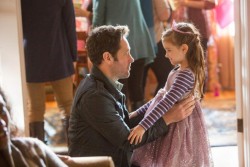 From the moment Ant-Man was first announced and all throughout its production phase there was a lingering question of whether or not Marvel’s smallest hero would be up to the task of continuing Marvel’s dominance at the box office. My focus was on wondering if it would be a good movie and what its success would mean for other Marvel characters in terms of making appearances in the cinematic universe or more. And I know some only gave this movie the benefit of the doubt because it was Marvel. Well, I’ll say that this movie not only held up but was easily one of the better Marvel movies to date. The fact that Scott Lang was driven by the desire to turn his life around for his daughter made him different in the sense that he’s been the only title superhero with a child in the cinematic universe. This didn’t just apply to him but to Hank Pym as well since his daughter, Hope Van Dyme, only came to Hank initially to ask for his suit in order to stop Cross. So there was clearly the superhero in the making storyline but the take was unique in ways so it didn’t feel monotonous. This was due to the various characters, the action, and yes the story showing that even the smallest one could make the biggest difference. And one of the things I loved was how the dangers of this technology falling into the wrong hands was made clear so that added needed gravity to the Ant-Man technology and respect for the suit. 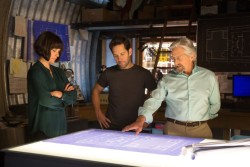 Scott Lang had zero plans to become a superhero, unless you consider his actions that landed him in jail heroic.  An entertaining job was done in showing the difficulties he faced in finding a job as a felon, and it was pretty humorous too. Scott had his crew of Luis, Dave and Kurt who kept trying to get him to do do this heist since he was capable. And Luis, played by Michael Pena, stole many scenes with great lines and nonstop laughter. With Hank Pym entering the mix was the perfect situation considering the situation, and the justification for him approaching Lang and not just giving the suit to Hope was connected to him knowing how it could change a person and never telling her what actually happened to her mother. There was the usual training so Scott could learn how to use the suit and become acquainted with different ants and their purposes. This was really cool, and I admit I even started looking at different ants through these lenses for a while because I would be reminded of the movie. The CGI was just incredible. And the cast’s chemistry gave these segments even more life. And that’s because the character development was on point and made you care about what the characters went through and currently faced. The tension between Hope and Hank was explained, and as the movie progressed the truth behind her mother’s disappearance was revealed, and Hank wasn’t portrayed as the perfect father. And I enjoyed Hope Van Dyme and it would be a missed opportunity if she’s not utilized in future movies. And Paul Rudd did an amazing job as Ant-Man providing the right amount of levity and seriousness in the various situations. 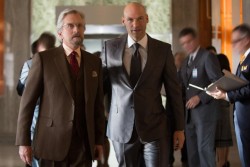 Despite the time spent training, the story never felt like it was dragging, and the work being put into the heist. The cat and mouse game complete with twists was intriguing, and Darren Cross’s ambition (and paranoia) made these events even more intense. The contrast with Lang’s desire to use the technology for good and to protect his family was well-played. The action was electrifying with well-timed humor that appropriately showed the scale of the actual battle but still captured the severity of it. It was almost a self-deprecating humor without feeling silly, and I could only see working for this character in this movie. And the battle with Yellow Jacket was great although I’ve always wondered how villains with no prior fighting experience or use of a suit suddenly become formidable in combat. And I loved the various cameos throughout including the connection to the New Avengers but I won’t give that away. But I do see a bright future ahead for Ant-Man in the Marvel cinematic universe.

Ant-Man is an entertaining superhero movie that stands out not only because of the size of its protagonist but its approach to creating a hero, it’s humor, and its ability to make even the relatively smaller matters in the Marvel Universe feel like a big deal. The characters feel unique and each one brings an important aspect to the movie. The story is engrossing and the action is spectacular with characters switching between sizes mid-battle. The connections to the greater Marvel universe are well done and give Ant-Man a context within the universe but it didn’t feel like it overrode the focus in the movie. I highly recommend Ant-Man because it’s a thrilling ride even on a small level.