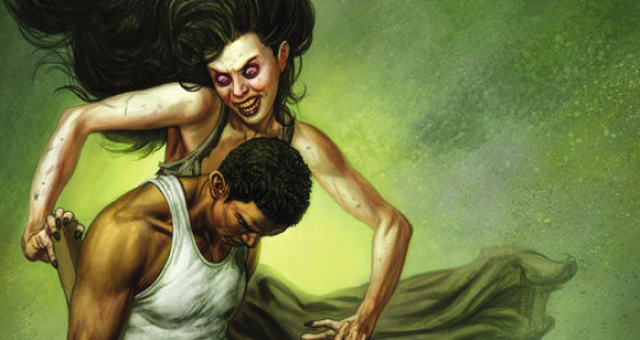 American Gods #6 shows Mr. Wednesday finally revealing his true identity and his plans. It opens up with Shadow traveling on a mysterious beast that he believed was originally a carousel. While traveling he sees bizarre images that he’s never seen in his life. He compares his vision to a dragonfly’s vision because wherever he looks he sees a tapestry of images. For example, when he looked at Czernobog he saw the old man he knew. But he also saw a young prince with blood on his hands and face, wearing nothing but a bearskin on his shoulder. He also saw a black monster with red, burning eyes.

When they arrive at their destination, Mr. Wednesday asks Shadow if he knows him. He tells Shadow names that others have called him by and some are familiar to Shadow. Shadow wonders what he should believe when the name comes to him: Odin. Mr. Wednesday appears to grow larger as he repeats his name to Shadow. Shadow can’t believe his eyes but then suddenly it all fades away. The meeting Odin called is beginning to start. Could Mr. Wednesday really be Odin, the all-father? And if so, why has he called this assembly?

Up to this point in the series, Mr. Wednesday paled in comparison to others to me. Aside from the schemes and the introductions to other characters, there wasn’t much revealed about who he was or what he wanted. This issue changed that drastically, and it wasn’t just due to Mr. Wednesday’s true identity being revealed. It was also his plan, which opened up the fascinating world of American Gods even more. And Shadow’s incredulity about everything taking place around him was just enough to put everything in context.

Mr. Nancy told a story to the gathering that perfectly captured the predicament they were in to make Mr. Wednesday’s plan successful. The story was about him and a tiger. It was humor combined with wisdom that showed it wasn’t just about numbers or strength that would make them successful. It was also about cunning and, well, who had the biggest balls. So the questions the others lobbied at Mr. Wednesday allowed the story to develop their characters enough to be intriguing. This was also accomplished with Shadow being responsible for escorting them to their destination after the gathering. 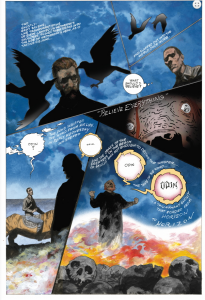 The last part of this issue moves Shadow and Laura’s story forward tremendously.  I won’t give away the series of events but I enjoy what Laura is capable of doing now. But it wasn’t just the action that was entertaining. It was the answers that were given and the way they were given. To see earlier events and trinkets being tied together felt rewarding. And it gave hints about what made Shadow so important. And in the midst of what appears to be the beginning of a war between gods it’s important to be reminded of what could be lost (or gained) in the chaos.

American Gods #6 does in excellent job in finally revealing Mr. Wednesday’s true identity and his plan. I’ve waited six issues for this and it’s well worth the wait. Mr. Nancy is the most memorable character among the gods introduced. That’s stating a lot since they’re all intriguing now. It’s also good to see Shadow in a situation that doesn’t revolve around Mr. Wed…Odin’s plan. And what’s even better are the answers that are given. Every issue the world American Gods is creating just gets better. This issue makes me feel fully invested.