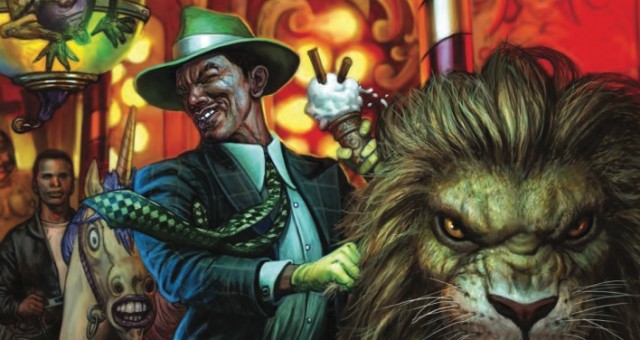 American Gods #5 has Shadow and Mr. Wednesday concoct a scheme to gain some quick funds. It opens up with them leaving the Zorya sisters’ home to continue on their journey. While leaving, Shadow drops the coin he received from one of the sisters and Mr. Wednesday notices this. He tells Shadow that he should be more careful with the gifts he receives. Seeing Lady Liberty on the coin “inspires” Mr. Wednesday to give his not so flattering analogy of her and America.

This environment is what helps Mr. Wednesday come up with his get rich quick scheme. They go to a local bank where Wednesday gets a stack of deposit slips. He then goes to a Kinkos where he makes business cards and large signs. His plan is to pretend to be a night security guard at the bank so people would give him their deposits believing the ATM was broken.  However, one strange aspect of this plan was Wednesday asking Shadow to think about making it snow. It does eventually snow but did Shadow really have anything to do with it? Or is it all just part of Wednesday’s elaborate plan and tricks? 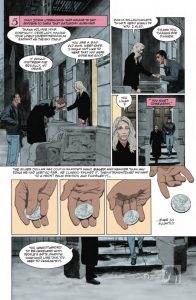 Every comic book is an experience. Some are intense, action-packed experiences, some are more cerebral and many fall in between. American Gods takes pride in its gritty nature from the characters’ origins to its setting. But its fantastical nature, the way it offers an escape from this environment, is what sets it apart. The prior issues had Shadow grappling with the truth of everything occurring around him. This issue asks Shadow, and as a result the reader, to actively believe in creating a wondrous event.

The first half of this issue presents this dichotomy perfectly. On one hand Mr. Wednesday is orchestrating a scam to rip people off when they attempt to make deposits. On the other hand he tells Shadow that this scam won’t be successful unless Shadow makes it snow with his mind. Why would Wednesday need this scam and why couldn’t he just make it snow? Or instead of needing Shadow’s belief did Wednesday just check the weather forecast ahead of time and is conning Shadow as well? Either way this part of the issue unfolded beautifully. I was engrossed while entertaining these various thoughts. 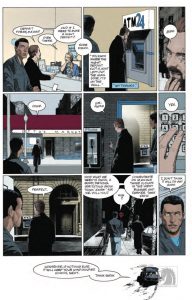 The second half of this issue served as a sort of reward for the reader. Since this issue read more like a novel than a comic, it helped that the the writing was exquisite and the characters were enjoyable. Just like the last 2 issues, Wednesday introduced Shadow to more of his ilk. But he would also take him to a place of power, a place of “real magic.” I won’t give away any spoilers because this part is fantastic but the situation becomes more than just one of belief. And this is where Scott Hampton’s artwork shines through because it grabs the imagination and takes it on a satisfying journey. I can’t wait to see where Shadow ends up next.

American Gods #5 takes the series to the next level by asking Shadow to actively participate by believing in his own power. The scam Wednesday concocts unfolds in an entertaining manner that makes one question whether or not he’s a complete con artist. But it doesn’t stop there because Shadow’s widening perspective is the real treat. Instead of just getting glimpses of the paranormal, this issue gives tickets to the main event. And I’m ready to see more.