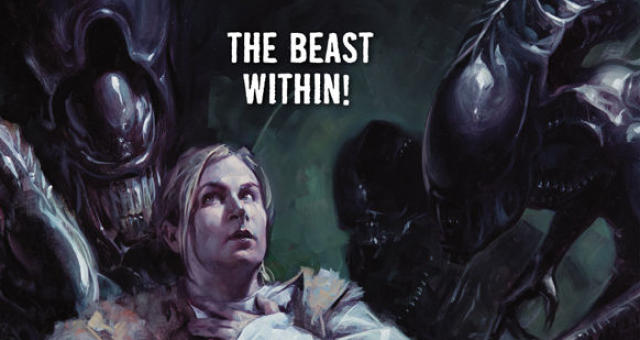 The rescue is on! Paget and Roth are all set to rescue Chris, who is unfortunately trapped in an alien hive. Not only is she trapped, but also Chris is right in the center with the Queen. This is not your standard grab and go, as we are about to find out in Aliens: Life or Death #3.

Considering her current situation, Chris wants no part of being rescued. Doesn’t want any more lives lost. She reveals to Sergeant Roth that she has been impregnated and tells him to abort. Jill defiantly objects, revealing that she made a deal with Lorimer, a Weyland-Yutani employee, a deal we saw brokered in a previous issue. Deals with The Company never quite turn out as expected, and if they are able to rescue her this could get interesting.

We switch to our Lethal Weapon team of Galgo and Ahab, whom happen upon the rescuer’s abandoned Cheyenne Dropship. They formulate a plant to use to escape on their own. I thought this was a nice touch as it shows they both are still rough around the edges. Their first thought wasn’t to find the Marines. It was to escape. That doesn’t go as planned when a very angry suited-up Engineer annihilates the Dropship mooting everyone’s plan for escape. I know there are some disappointed with the Engineer’s weaponry, but I feel some of that has to do with Fox. They are probably given certain guidelines due to the movies. 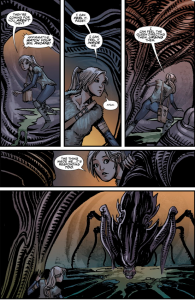 Things get very interesting from here on out. The hive is not in the best of shape and the embryo inside of Chris might change everything. Both should set the stage for an excellent finale and possibly the last ¼ of the story. I don’t know what is planned for Ahab and Galgo the rest of the way, but I think they deserve their own mini-series. If they survive, I think the readers deserve it. If Dark Horse can throw the Aliens against Judge Dredd and Star Trek, we can get a Galgo/Ahab series.

Part 11 of 17 is in the books and we’re gearing up for a fun last few issues. This story has definitely flowed better than Fire and Stone, and I’m looking forward to the last part of Aliens: Life or Death as it can set the table for the rest of the story. Excellent issue, the theme of hope and regular people overcoming odds prevailed throughout, which is a core part of the Aliens universe. Until next issue, stay frosty.