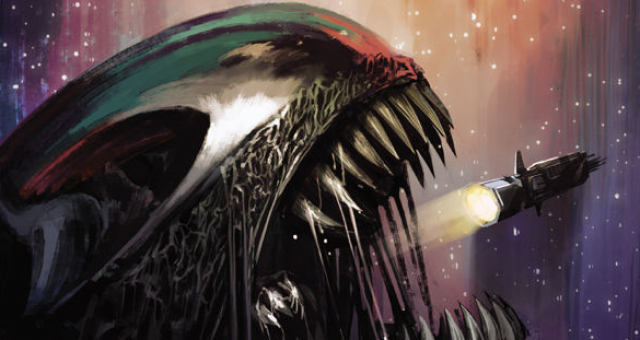 With the worst behind them, it was only fitting things got crazier for our heroes in Aliens: Defiance #9. The ship and Hendricks are falling apart. Davis is outside the ship tending to repairs when their mission encounters yet another roadblock.

Before we get to what happens next, remember the baby pulled from Dr. Hollis? She’s grown up quite rapidly, and is now a full-grown Queen. They wanted specimens to test out how to best kill them, that won’t be a problem now. But other problems rear their ugly head first, as Hendricks and Hollis spot intruders docking the ship. It’s a group of pirates. Considering how broken the ship is, this will be a tall order to defend.

Hendricks remains determined to return to Dr. Yang. The pain is just too much for her to bear, and she is steadfast at returning to Earth and fixing her back. This should be interesting, as the condition Earth is in could make for some great additions to the story.  Does Weyland-Yutani want the xenomorphs to combat another threat, or do they want to use them for a hostile takeover? Personally, I never tire of nefarious Company subplots. 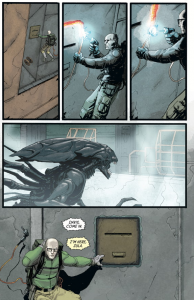 I don’t want to give away one of the best parts of this issue, but I have a feeling it’ll warm the hearts of the fandom everywhere. The action and set pieces were just awesome. This was one of the more action heavy issues. Not much character development here considering one of the strengths of the Defiance series has been its ability to balance character development, action, and suspense.

As poet laureate DJ Khaled says, “Another one!” Once again, Aliens: Defiance hits another homerun. The 24 pages fly right by and demand a reread. You know the drill, go get it! Until next issue, stay frosty!