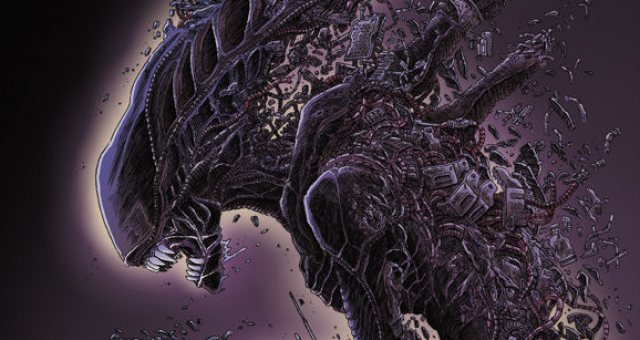 Dark Horse announced Dead Orbit some time ago, and have had the hype-train running at full speed since. They even released a movie style promo for it (It’s awesome, Check out here). I did not know what to expect, as too much hype can often be a detriment. How did Dead Orbit fare?

Wow. For those humans who have kept up with my reviews, I have long lauded the Defiance series for it’s ability to create atmosphere and character. The two key elements that Alien, Aliens, and to a certain extent, Alien 3 did extremely well. James Stokoe, hats off to you sir. This is a fantastic addition to the Alien universe.

From the opening panels, Dead Orbit drips of atmosphere. It mimics the detail oriented beginning of Alien. The air of mystery and exploration is nailed. There is no dialogue until about 1/3 of the issue is done. When it’s time for the first introduction of the characters, it’s written in a natural manner. It reminded me of Alien and the prologue promo dinner scene for Alien Covenant. Just a bunch of regular people going about their day. 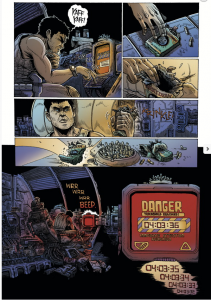 Getting to the story, a ship and it’s crew come across a space station that has been ravaged by some type of disaster. It’s in ruins and the staff is nowhere to be found. One engineer (not that type of Engineer), stumbles across a xenomorph and is forced to use everything at his disposal to survive.

It looks like we have a new addition to the “must read” category with Aliens: Dead Orbit #1. What makes it even more impressive is that James Stokoe pulls a triple-double that would leave Russell Westbrook impressed: He does the writing, the art, and the cover! That is just awesome. Aliens: Dead Orbit will be released on Alien Day 4/26. Be sure to go get it!