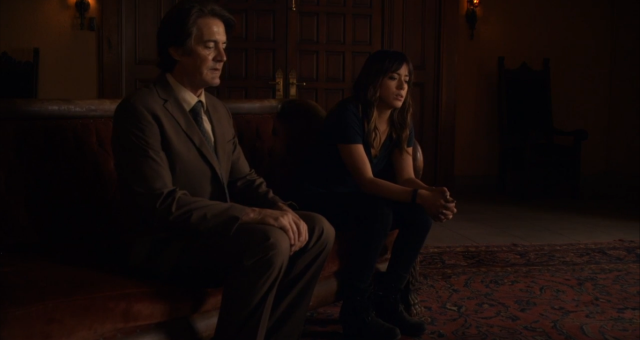 Agents of S.H.I.E.L.D.: What They Become

Agents of S.H.I.E.L.D.: What They Become is the mid-season finale and has Skye learning the full truth about her identity. It opens up with Agent May telling the team to get ready for evasive maneuvers as the bus is pursued by two Hydra planes set on destroying them in the sky. So she takes action to make sure they’re not sitting ducks, and with Triplett’s help puts the bus into a dive. She doesn’t want to use the cloaking too soon because they would just keep searching so instead she makes use of the eject pods once the jets fire their missiles. And using the explosion and clouds as cover they then enter into cloaking mode to get Hydra off their tail. But everything isn’t resolved as Ward took Skye and Raina with him in order to deliver the former to her father and the latter to Daniel Whitehall. And there aren’t any additional complications as Skye finally meets her father face to face, and he prepares to tell her about himself and her true identity. He vows that once she learns the full story she won’t believe he’s a monster. Meanwhile, May informs Coulson of the entire situation, and he lets Bobbi know that not only does Hydra have Raina and Skye but they know about the city and are heading there with the obelisk. But Bobbi’s plans and stash became more complicated with Mack seemingly falling to his death so her situation with Lance is up in the air. Will S.H.I.E.L.D. ultimately have an ally in Skye’s father, who wants to kill Whitehall more than anyone, or will the secrets contained in the hidden city be too much for any organization to handle?

The alien markings storyline has been the most compelling storyline in this series to date, and it’s been full of incredible potential as well. It’s evolved into a remarkable story about a hidden city with the potential to unlock the true nature/powers of special individuals. It’s been fascinating due to the speculation about the identities of certain characters, and even possible connections to the upcoming slate of Marvel movies, namely the Inhumans. But the other storylines, such as former Agent Ward’s current situation, have been very entertaining, and it’s been enjoyable watching everything come together. So I was watching the dream sequence at the start of the last episode to see if it would give any clues about Skye’s future. But this episode wouldn’t take long to start resolving some issues as Skye and her father would meet and they would talk about everything from her past to what happened to her mother. He would tell Skye that he wasn’t really working with Whitehall, and was instead just getting close to exact his revenge for her mother’s death. This was a touching moment, and Kyle MacLachlan did a good job conveying the details and emotions, and as a result making their reunion believable. And his Jekyll and Hyde persona up to this point made me wonder what his true power was, and this episode would reveal that hints about his true identity were being given all along. Despite Skye and her father sharing all of this privately, the fact that Ward was directly involved in bringing her to her father made it abundantly clear that his allegiance wasn’t to Whitehall or Hydra either. The fact that he brought Skye and the secrecy wouldn’t go unnoticed by Whitehall, and it would make for an intense scenario that had Skye learn her connection to the Obelisk.

This episode would have action throughout, and the stage would be set once Whitehall figured out that Skye was the Doctor’s daughter. They would ultimately capture Skye, the Doctor and Ward with the help of the counterfeit Agent May. Well, actually, it was Agent 33 with the burned Agent May face. And even though her actions prior to this were entertaining, I couldn’t get used to someone with May’s face in this role. There have been good villains this season including Whitehall. And one of the reasons I enjoyed the change in Ward was because he had to play the perfect boy scout before as part of his cover so he felt extremely generic at times. But to me there’s only one Agent May, and she’s been badass enough throughout these 2 seasons, and has even been in various undercover roles with Coulson so how character has been much better developed. So my motto is to accept no imitation Mays because there can only be one. And Agent 33’s devotion to Whitehall is similar to Ward’s former devotion to Garrett, so it feels repetitive when Agents of S.H.I.E.L.D. has really been improving its slate of villains. And the action wouldn’t just consist of them as part of the S.H.I.E.L.D. team would make its way through the city with the intention to blow up the tunnels to bury it so Hydra wouldn’t be able to access it either. And the other part of the team would attempt to rescue Skye from the clutches of Hydra. So the overall story was moving forward very well as the tension was building in anticipation of the secrets of the obelisk being revealed, as well as the true nature/abilities of certain characters.

The past few episodes have been excellent to me but this episode as the mid-season finale had to deliver in a big way with all these storylines. And the last leg of it definitely does that. I won’t give away any spoilers but Skye’s true name, and nature is revealed, and the same for other characters. And the obelisk, or rather what it contains is clear to those familiar with the Inhumans. And there’s also a major death(s) too. Not the cliffhanger like the end of season one but a definitive one. I really liked the character but it’s not possible for every single person to survive every mission. There’s one issue I have with it that wasn’t done to other character(s) but that would be spoiling it too. And my excitement for the second half of the season is through the roof with the introduction of super-powered beings, and a race that hasn’t even been introduced in the movies. And with a strong variety of characters including potential villains, this show can truly become a powerhouse.

Agents of S.H.I.E.L.D.: What They Become is a great mid-season finale, and delivers in a very big way providing answers to questions that were built up for a long time while introducing new elements to the live-action Marvel universe. Skye’s reunion with her father, and the latter telling her everything about her past and what happened to her mother was definitely a touching moment with meaningful character development. I even enjoyed the Bobbi/Lance storyline more this episode. And the status quo for this show has drastically changed as a result of the developments with the obelisk and the character death(s). I don’t know exactly how things will play out in the first episode back but I do know that the sky is the limit for now on, and I couldn’t be happier about it.